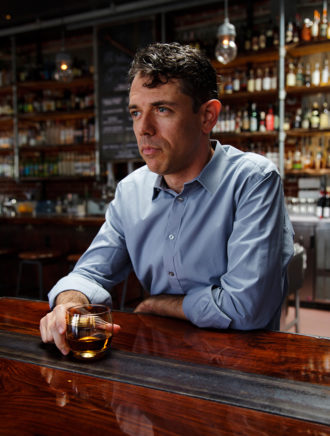 In his inaugural book Proof: The Science of Booze, Wired editor Adam Rogers embarks on a journey to demystify drinking (while enjoying a dram or two along the way). Written in the same approachable, yet science-savvy tone of other geeky tomes (think Amy Stewart’s The Drunken Botanist and Brian Greene’s The Fabric of the Cosmos), Rogers’ book sheds light on everything from barrels to bacteria strains. He took time out to chat with us about the science of booze and how that translates to what ends up in our glasses.

Imbibe: How did you get into drinks?
Adam Rogers: I’ve been a fairly intensive cocktail drinker and drinker of single malt whisky since I was old enough to drink. I read Paul Harrington’s cocktail book he wrote for Wired cover-to-cover. He was one of the first people who got interested in recovering historical cocktail recipes, and it was his book that got a lot of the current generation of great bartenders into it since. I still remember buying my first bottle of maraschino liqueur in Italy before anyone was importing it into the U.S. and being very excited because that meant I could make Aviations.

Throughout your travels and research, what’s the geekiest thing you’ve seen on the spectrum of cocktail geekiness?
I was really impressed by the brewpub setup at White Labs in San Diego. They have very precise clinical procedures for growing yeast and provide different strains of it to craft brewers and homebrewers. Next door, they also have a little bar with two dozen taps, and the only difference among the beers there is the yeast that is used to ferment them. It’s very much like a lab experiment. You get to taste the beers and can tell the difference between what the yeasts do. That to me is the super-scientific spirit—bringing the rigors of laboratory testing into the wonderful craft of drinks.

What were some of the biggest surprises you came across while researching and writing?
I was surprised by the gaps in knowledge. I think one of the mistakes we make about science is that we think that the most interesting thing about science is the answered questions—but no scientist thinks that. The interesting thing about science is the unanswered questions. And I was stunned by how much we actually don’t know, like basics on how the sense of smell works, and the lack of science on hangovers is shocking—that seems to me something that everybody should be interested in.

Has learning the ins and outs of the science behind booze made you enjoy drinking more or has it stripped away some of its romance and mystique?
It always makes it more enjoyable to me. I know some people don’t feel that way, but for me, the further down the rabbit hole I can fall, the more I like the trip. I think the marketing around booze emphasizes history and tradition. We like to tell stories about who makes this particular bottle, what’s in it and why it tastes the way it does, and I have a lot of appreciation for that, but I think talking about history and tradition can be a bit of a red herring because some of the modern methods that don’t come from tradition actually make a better product. Some of the best bourbon in the world comes from places that are essentially chemical factories. They are so well-run, so scientific, so high-tech and so precise in what they have to do to make a product that tastes good. In the same way that all great art requires talent, this requires knowledge and an understanding of your medium. It’s a testament to human ability, and makes you feel like what you’re tasting is not an accident.

Did writing the book change your drink preferences at all?
The book did change how I drink. I still like cocktails, but my appreciation for straight spirits is much greater now. Some of my favorite experiences in doing the book were getting to taste new-make spirits, or when a distiller would dip a thief into a cask and I’d get to taste what they were working on. That had a purity that felt like a direct connection to both the science and creation of stuff that I’ve come to really love and value more than I did before.

What’s your idea of the perfect drink?
When it’s warm, I’m often drinking bourbon with ice. As it gets cooler, I switch to single malts or weird clear stuff—slivovitz or some of the white whiskies. For cocktails, I default to an Aviation if there’s one on the menu, because I love that drink. So much of taste is tied to memories, and my grandmother and my mother both drank Martinis, so for me, a Martini served up with two olives is a connection to my family. The first time I tasted single malt whisky was with my dad. I feel those connections emotionally, and they come back in these drinks. I can take a bottle of Scotch out of my cabinet and pour a finger of it into a glass that feels good in my hand, and it tastes good and is a pleasant experience in itself, but has emotional resonance.