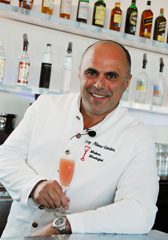 Tony Abou-Ganim began bartending in 1980. And what could have been a risky job choice at the time became a springboard, launching a successful career that has spanned everything from hosting international cocktail seminars to appearing on Iron Chef America. With the release of his book, The Modern Mixologist: Contemporary Classic Cocktails, Abou-Ganim took some time to chat with us about what he’d drink on a deserted island, equal opportunity imbibing, and getting an agent—after he’d ended his acting career.

Imbibe: You come from a self-professed bar-savvy family. Was there one defining moment that hooked you on the profession?
Tony Abou-Ganim: I can think of two distinct moments from two different points in my life—the first being my 18th birthday. My cousin Helen owned a bar in Michigan. And before I turned 18, which was Michigan’s legal drinking age then, I’d always help stock the beer coolers and then finish with a Shirley Temple. But on my 18th birthday, my mom and dad took me in and we sat at the bar. And my cousin Tony began to line up all these drinks in my honor. Unbeknownst to me, they were all classics—Manhattan, Whiskey Sour, Tom Collins in the namesake glass with the little monkey hanging on the side—and they just kept coming. Obviously, I didn’t drink them all, but I was so fascinated by the skill that went into making each one. Two years later, my father convinced Helen to put me behind the bar.

It was 1980, and Helen didn’t want me to bartend. Back then, bartending was just a part-time job while you’re finishing school or working on an acting career. Fast forward to 1993, and I was that guy bartending while pursuing a theatrical career. It was then that I had that second moment—I went to the bar at the Rainbow Room and met Dale DeGroff. Just watching his passion for this craft I thought, “You know, I’ve been doing this now for 13 years and I’m missing something.” From that day on I set out to be the best bartender I could be. The funny thing about back then was that I was in New York pursuing an acting career and trying to get an agent, and now as a bartender, I’m represented by ICM.

In three decades of bartending, what do you see as the biggest change in the industry?
I think if you look at things historically, before Prohibition happened, bartending was a great profession one could aspire to take part in. After Prohibition, the bar fell out of favor and we lost that kind of role model feel. In the ’40s and ’50s it started to rebound with Martinis, Manhattans, and a lot of Hollywood. But by the ’80s, bartending still wasn’t viewed as a culinary craft. Now, it seems like things have almost come full circle. Importance is now being put on the cocktail again, just as it was on a great wine list or an executive chef-driven kitchen.

The entire dining experience has transformed from being merely fuel to this real social occasion. And the bar is, in my opinion, the heart of that experience. People always ask me about trends, and I say that the trend it what it was 100 years ago. The craft of the bartender doesn’t have to be lavender foam and gold flakes, but going back and resurrecting those classic cocktails that had been sleeping for a little while.

In your book, The Modern Mixologist, you focus a lot on the history and evolution of certain drinks and spirits. Did you come across anything surprising during your writing?
How much I love Campari! If I was on a deserted island and they told me I could only drink one thing for the rest of my life it would have to be the Negroni. My own personal journey with Campari didn’t start until 1990, when I moved to San Francisco after college. We found a bottle in the apartment we were subletting and I said, “Let’s try it.” One sip and I spit it right out. Growing up in the Midwest, I’d never been exposed to flavors quite like that, but I went on to become a huge fan. The book itself is really something that has evolved over the past 10 years, kind of like my taste for Campari.

What do you wish more consumers understood about bartending?
That there is no great, hidden secret to bartending. I think a lot of consumers feel that only the high-and-mighty barman could possibly conjure up such mighty libations as the Mojito or Margarita, or even a Martini or a Manhattan. But when I was a kid, my dad taught me how to make a Martini. He was like, “Son, you learned how to tie a bow tie and now you can learn how to make a Martini.” When my cousin would have her girlfriends over to play Bridge it wouldn’t be, “Would you like white zinfandel or a beer?” It was, “Can I make you an Old Fashioned or a Tom Collins?” She had the wherewithal to make those classics, as well as the tools, glassware and spirits.

I think today there’s an intimidation factor to mixing drinks at home. Sometimes at the end of one of my seminars, people come up to me and are mesmerized by how to make a Manhattan. But once they realize it’s something they can do on their own, you see the light bulb go off. You can tell they’re going to go out and buy nice glassware, stock their bar, and have their friends over for cocktails.

So, what’s your favorite cocktail to make?
I have to come back to the Negroni. Just pulling the mixing glass out of the cupboard, knowing that I’m about to make a Negroni puts a smile on my face. It’s the ritual of it. There’s a romance involved in mixing cocktails that just isn’t there when you open a beer or pour a glass of wine.

When you’re not sipping a Negroni, what are you drinking? Are you all cocktails, all the time?
No—I’m definitely an equal opportunity imbiber. I’ve always been a Pabst Blue Ribbon fan. I know it has become kind of hip with the young guys, but I was drinking it back when it wasn’t. And I love a well-poured pint of Guinness if I’m at a good Irish bar where I know they use the right mix of nitrogen and they go through a lot of kegs. With wine, I’m always looking for a great bargain. I love New Zealand sauvignon blancs, and in the summer, I’m a huge rosé fan. And when I pushed the send button with the final draft of my book, I went down to the bar and ordered a bottle of Billecart Salmon rosé Champagne. If there was one wine that I would keep a case of on hand, it would be that.