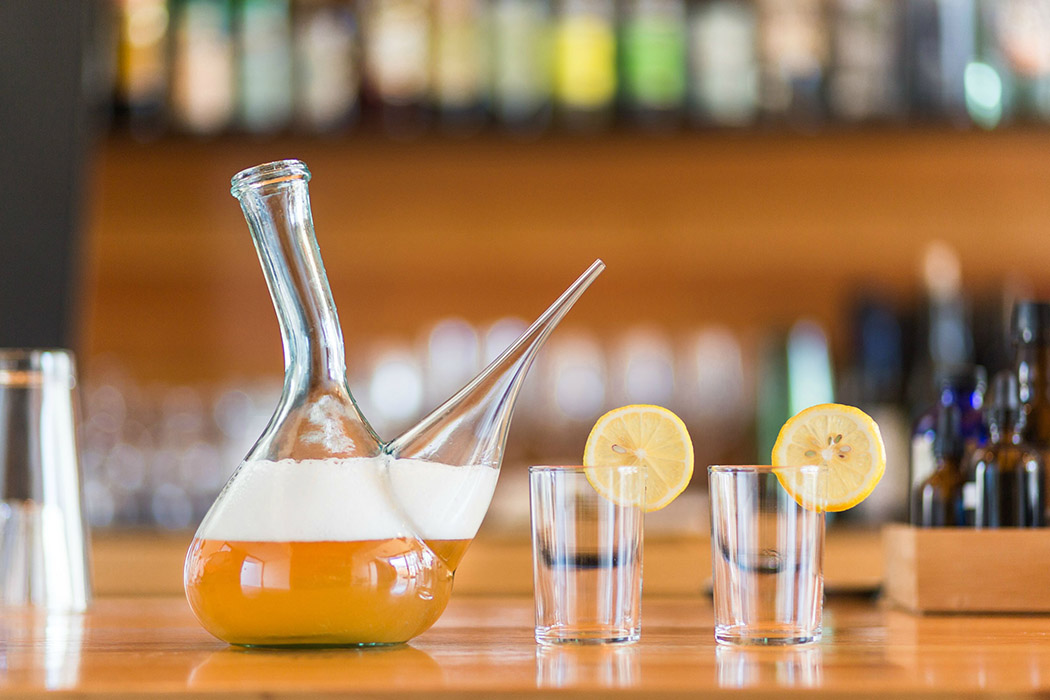 Until recently, the unusual-looking drinking vessel known as a porron had been been used mainly in its native country of Spain. Max Kuller, wine director at Estadio in Washington, DC says the ritual was initially born out of necessity, because it was “it was more economical for people in poor Catalan communities to all share a large beverage/wine out of one vessel than for everyone to have a glass of their own.”

For the modern bar setting, using porrons is about making communal drinking a little more fun, and increasingly, bars and restaurants across the U.S. are incorporating the vessels into their drinks service. In Spain, porrons are typically used for wine or cider, and in the U.S., many places like Tasca Chino in New York and Qui in Austin honor that tradition, but there’s no hard and fast rule about what kinds of drinks can be poured. Rachel DelRocco, beverage director at Qui, says once their staff was comfortable with serving wines and ciders in porrons, expanding into other territory was a natural next step. Now they serve calimocho (a Spanish drink combining red wine and cola) as well as a mixture of tepache and beer. Meanwhile in Dallas, Proof + Pantry serves brunch rosé in porrons, and at Estadio, Kuller offers three options for porron service: a beer/lemon soda mix, Txakoli wine with lemon soda and orange bitters, and Garnacha with lemon soda and Angostura bitters.

Curious to try using a porron at home? You’ll need some tips, and we’ve got four good ones:

2. Start light. “To ensure clean clothes at the end of the experience, start by offering white, cider or rosado. Red will be a bit of a problem, although it’s often done, perhaps not in a NYC dinning set-up. Next, be sure to start close to one’s mouth, and gradually take the porron backwards to create a longer stream.” —Aviram Turgeman, Beverage Director, Tasca Chino, NYC

3. Be quick. “Because of the shape of the porron’s spout, there’s quite an art to it. It takes a little practice. Have confidence. No hesitation when beginning a pour—just a quick flick of the wrist to start and stop and you’re all set.” —Max Kuller, wine director at Estadio DC, Washington, DC

4. Trust the stream. “It may sound odd, but the best tip I have is “trust the stream.” Tilt your head back and let it go. And, of course, have a napkin handy for beginners.” —Michael Martensen, co-founder and barman, Proof + Pantry, Dallas