The Origin of the Cocktail 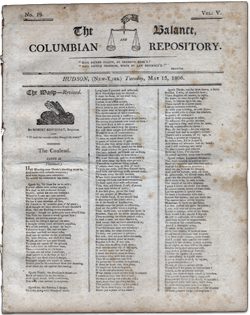 These two issues of the Balance & Columbian Repository of Hudson, New York, are two of the three primary signposts of the cocktail’s holy grail…its origin. (No one has yet located a physical copy of the earlier April 1803 Farmer’s Cabinet that first used the “cocktail” word, making it the earliest citation.) These two printed examples were thought to be the very first for about 70 years, and even though they turned out not to be the first, they remain the words by which we’ve defined the origins of the cocktail for over two centuries.

These newspapers obviously did not exist in the service of the cocktail. In fact, their references were a minor, self-serving metaphors in the battle of the Federalists (strong national government) versus the Jeffersonians (proponents of a more loosely constructed vision of sovereign states working symbiotically) where the Balance was a passionate voice for the Federalists. Thomas Jefferson was in office and beyond the initial unanimity of George Washington and the new government of a new country, the ideological factions had, all too soon, turned divisively to partisan politics. It would lead to the Civil War, but for now, it was sniping over every small decision made by the administration. The singular event of the time was unquestionably the Lewis and Clarke expedition, and the Balance & Columbian Repository would be among the very first to publish the words of Lewis & Clarke chronicling their exploration in the aftermath of the United States’ acquisition of Louisiana from France.

This, not cocktails, provided the interest Americans followed with wonder. Yet, it was in this setting that the cocktail was defined and introduced into the larger world, in relative stealth, to citizens preoccupied, as ever, with the news, gossip and the primary concerns of their lives. The urbanity of the cocktail would come front and center later, and as we know, it was eventually noted in no uncertain terms. 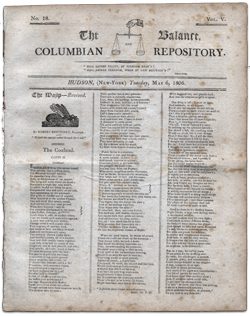 The images of the Balance and Columbian Repository are the property of Ted Haigh. The actual issues will eventually find their way into the displays at The Museum of the American Cocktail in New Orleans.