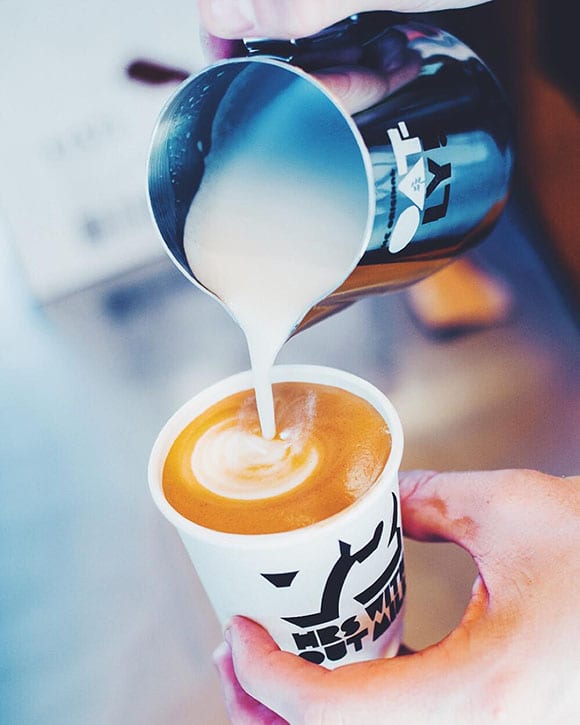 The standard selection of milk alternatives at coffee shops has long remained the same—soy, hemp and maybe a nut-based milk or two. But now there’s oat milk, which offers a texture that mimics real dairy.

Making “milk” from oats isn’t new. In fact, Swedish company Oatly has been transforming dry oat kernels into liquified oats for the last quarter century. “After surveying all the potential source ingredients you could use to make a plant-based milk—nuts, legumes, etc.—oats stood out as the source ingredient that was abundant and environmentally sustainable while also offering balanced nutritional content,” says Mike Messersmith, the general manager of Oatly’s U.S. operations.

In Sweden, the company makes many kinds of oat-based products—including ice cream, yogurt, spreads and other drinks—and they launched the flagship Barista Edition Oat Milk in the U.S. as part of an exclusive partnership with Intelligentsia in 2016. Now the coffee-friendly beverage is available in several hundred cafés from coast to coast. It’s free of additional sugars and includes vitamins and minerals like vitamin B12, riboflavin and calcium.

For Intelligentsia, oat milk’s versatility and neutral flavor were the main appeals. “We did a bunch of taste-testing on several occasions across every city we’re in, and we tried it with everything. We put it in brewed coffee. We made lattes with it. We made mochas with it. We put it in chai. We put it in matcha. It’s great with everything,” says CEO James McLaughlin. “What we’re looking for in an alternative milk is something that will still carry a creaminess, richness and depth of flavor without adding new undesirable flavors. Oatly is like a blank canvas. It lets the coffee or tea shine through, carries it with a creamy body, but isn’t overly oaty.”

Thanks to its slightly higher fat content (compared to soy and almond milk), oat milk also acts more like dairy when mixed into coffee and other drinks, which is one of the reasons why people like Horizon Line founder Brad Penna (a vegan himself) likes the product. “We serve a matcha latte, and we would all rather pour that with oat milk instead of dairy. That’s mind-boggling to me. It holds up so nicely,” he says.

Penna is even considering offering a flight of drinks made with different alternative milks just to illustrate how well oat milk mimic dairy. Metric Coffee founder Xavier Alexander also loves how it behaves when mixed. “Oat milk allows you to make really pretty latte art,” he says. “It looks just like milk and has a really full body.”

Oat milk is also sustainable option. Sweden forbids the use of pesticides that are allowed in other countries, and the company claims that “greenhouse gas emissions from oat drinks are just one third of those generated in the production of cows’ milk.” Messersmith continues, “Oatly was founded with sustainability as a core principle behind everything we do and that has resonated very strongly with the coffee community for whom sustainable sourcing is an incredibly important issue.”

Keep an eye out for three new products to hit U.S. cafés and grocery stores this fall, including a low-fat variety, the original oat drink and a chocolate oat milk.