Are Field Blends The Key To Mezcal’s Future? 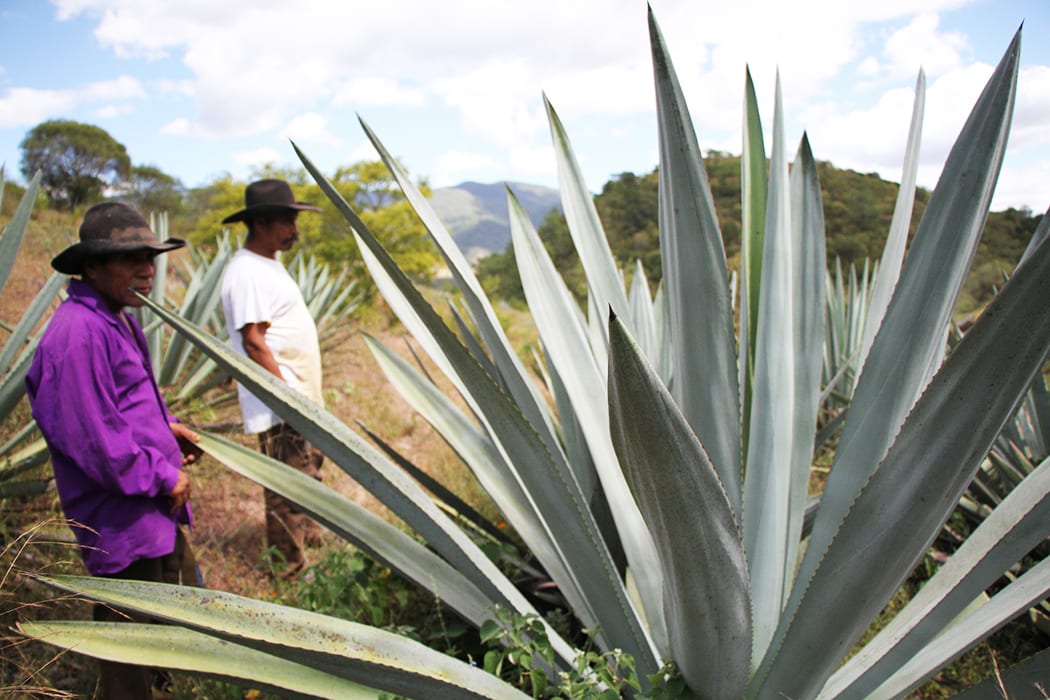 When Del Maguey launched its line of Single Village mezcal in 1995, founder Ron Cooper made a decision about the first two bottlings from the villages of Chichicapa and San Luis del Río. “I thought about tequila and how the bottle says it’s made from blue weber agave, and so I put 100% agave espadín on the label very prominently,” he recalls. “Nobody had ever done that. Then, in 1996 I discovered tobalá, so I thought, ‘Ok, we’ll put 100% tobalá on the label.’ ”

Of the hundreds of species of agave growing around the world, up to 50 are used to make mezcal in Mexico. With Cooper’s move to identify the variety of agave used to make a bottle, he inadvertently set a standard for mezcal brands to come. Now, similar to the way wines are made and classified by grape variety, most mezcal brands source single varieties of agave to make single-varietal releases, with the type of agave labeled clearly on the bottle. The ripple effect has meant that spirit menus are now commonly organized by variety of agave, and mezcal enthusiasts often collect their favorite varietals, coveting new discoveries in the same way one might cherish a single malt scotch.

Tasting a single-variety mezcal can be illuminating—getting to know the profile of a specific plant type can emphasis how much of the mezcal’s flavor is informed by the raw material—but the practice of making mezcal with only one kind of agave is far removed from how the spirit has been produced in Mexico for hundreds of years. “Historically, a lot of these mezcaleros were subsistence farmers, living off the land in very remote villages,”says Mezcal Vago brand and operations manager Francisco Terrazas. “Land holdings were very small, with each family having just enough land to grow their food and raise a bit of livestock. Few, if any, had enough land to grow acres of agave, let alone different species in organized plots.” Most families only made mezcal a handful of times throughout the year for special occasions (and even then, only in the dry season). So when it came time to gather plants, mezcaleros would “usually just hike into the hills with a machete and a few burros to scrape together enough agave to produce a small batch of mezcal,” Terrazas says.

With the assembly of wild, ripe plants gathered, mezcaleros would then cut off the leaves of each plant to reveal the heart, or piña, and roast them together in an earthen pit. That grab bag of cooked agave varieties is subsequently milled together, co-fermented and distilled, without separating any of the varieties at any point during the process (unlike most spirits blending practices where finished distillates are often blended together to create a final product). The results are what producers call ensambles (blends), mezclas (field blends) or mezcales del campo (mezcal of the fields).

While it was the main way of producing mezcal historically, few of the 100 or so brands available in the states specialize in blends today. Brands like Cinco Sentidos, Wahaka, Mezcalero, Mezcalosfera de Mezcaloteca and Banhez often release ensambles, as does Mezcal Vago. Salomón Rey Rodriguez, affectionately called Tío (uncle) Rey, makes several ensambles for Vago at his distillery in Sola de Vega, Oaxaca. Each one features a different makeup of agave varieties depending on which of the 14 species grown on his ranch are ready for harvest at the time. “Ensambles are how we have always made mezcal,” Rodriguez says. “There is mostly Espadín, Coyote and Mexicano—they grow very quickly, and they have the most sugar, so we plant a lot of them. We do it this way because there is usually not enough of one plant to make a batch of only one kind of agave. We have always used what we have around us to survive.”

At Real Minero in Santa Catarina Minas, the Angeles Carreño family has made “mezclas” since production started in 1898. (General Manager Graciela prefers the term mezcla, because she feels ensamble lends itself to be interpreted as a blend of finished single-varietal distillates). For Graciela, the field blends create a much more expressive flavor as each variety brings a different note to the distilled product. “She likens a mezcla to a symphony orchestra in which the flavors of the plants, like different instruments, express themselves throughout the experience,” says William Scanlan, importer of Real Minero via his company Heavy Métl. “Some will show their notes at the beginning, others in the middle and others will come through at the end.”

As mezcal continues to capture attention of drinkers around the globe, finding ways to protect the supply and biodiversity of the raw material becomes increasingly important, so many brands are returning to the practice of field blends. “For mezcal to have a future, we must maintain an equilibrium between what is harvested and what is planted,” says Carreño. “Mezclas allow producers to responsibly distribute the work load of certain agaves without over-harvesting large quantities to make large single-varietal batches of these rare, and often endangered, plants.”

To make sure they have enough agave for the future, Real Minero has an extensive nursery program to semi-cultivate a wide range of agave varieties, mostly from seed. They regularly make field blends (from both wild and cultivated agaves) that are released on the commercial market. “If the demand for mezcal continues to increase as it has, people must not forget that these natural resources have limits and must be respected,” adds Carreño. “The massive growth of the category is pushing important topics like sustainability and responsible harvesting, which ironically, is taking mezcal back to the common practice of using multiple varietals.”

Back at Del Maguey, Cooper’s focus is also evolving. “Everyone wants to try the newest varietals, but I’m afraid for mezcal in terms of the demands on single varietals, so we’re going back and doing a series called Maguey del Campo,” he says. “Our San Pedro Taviche has always been a mix of three kinds of maguey; our new village called Las Milpas (the corn fields) is an ever-changing mix; and we’ve just started a mezcal del campo in Puebla, so we have a bunch of them going.”