Mixopedia: The Origin Story of the Martini Glass 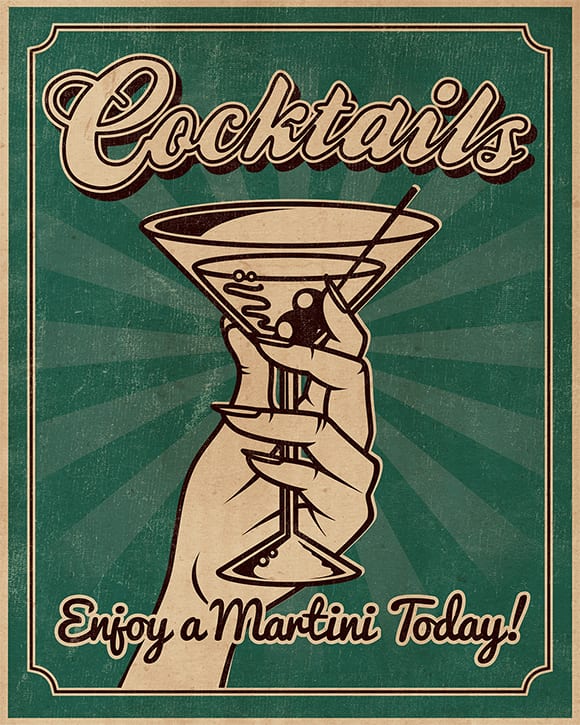 The Martini glass is one of those objects appealing in concept but disappointing in reality, member of a category that includes cotton candy and the films of Adam Sandler. One really wants to love the Martini glass—an upside-down pyramid balancing atop a thin stem dares you to not love it—but as a practical item the glass falls short in almost every respect. How did we arrive at the point where the inadequate became iconic?

Let’s start from the beginning. The Martini cocktail preceded the modern Martini glass by around four decades or so—on that, most everyone agrees. The early Martinis were likely served in Champagne coupes or variations thereof, as were many “up” drinks in the late 19th century. In the 1920s or thereabouts the angular Martini glass first surfaced, then in the 1930s it put its feet up on the chesterfield and announced that it would be staying a while. Like, forever. Since then, “This glass and the name ‘Martini’ have never parted company,” wrote noted Martini scholar Lowell Edmunds.

The Champagne coupe, it’s often said, was originally inspired by the curves of Marie Antoinette’s breast. That’s to say, it was something natural and nurturing. But then came the 1920s and the stem grew upward and thinner, the bowl flat-sided and broader across the top. The modern Martini glass is nothing if not unnatural. It appears to have been invented by someone in a white lab coat who was comfortable using the word “hypotenuse” in casual conversation.

Why this happened is a source of lore and speculation. One book trotted forth a claim that it was invented during Prohibition because the wide rim was “especially designed for use in illegal clubs to make for a quick disposal of the evidence.” Really? Have you ever knocked over a Champagne flute? It may empty itself a nanosecond slower than a Martini glass, but not enough to be the deciding factor between freedom and incarceration.

In the 1940s the Martini became “the drink of statesman and executive,” Edmunds notes, and subsequently the drink of those who aspired to be statesmen and executives. Those who held a Martini glass were telegraphing—er, telephoning—to the room that they were swank and modern. The glass became linked to the cooler aspects of the Art Deco era, like the streamlined train. It merged into the Midcentury modern sensibility without decelerating; the Martini was now the drink that came with tail fins.

The glass’s clean lines soon became a universal symbol, as recognizable as a circle with a slash through it. Bars around the world worked its profile into signs and logos. Anyone could sketch just five lines of equal length—basically a “Y” with a line across the top and the bottom—on a scrap of paper, pass it to a colleague during a tedious meeting, and he or she would brighten knowingly and accept your post-meeting invitation with a subtle nod.

Yet … and yet. The glass became a case study in what happens if something stays too long in the limelight. By the 1990s, the glass had eclipsed the drink—everything in a Martini glass began to call itself a Martini, no matter the color or content. Some of these were potable; many were not.

The Martini glass became the guest that wouldn’t leave. Its size continued to grow, as if overfed on Spanish olives, until the glass became obese. The 12-ounce versions were preternaturally top-heavy and unstable even when parked, easily toppled by a boisterous laugh or an errant knee. A full Martini glass on a small table is Chekov’s gun waiting to be fired in the third act.

As the glass grew larger it became ever more unwieldy to maneuver, the result of an uncompromising geometry. The steep side angles ensured that the liquid’s surface area grew disproportionately as the volume increased. This meant that even minor tremors escalated into major sloshing events, the bane of every server attempting to navigate across a crowded bar with a full tray. Bringing a full glass to one’s mouth was a process fraught with tension.

Some might pose the Frank Lloyd Wright defense. The architect would at times design buildings such that the front door was hidden, requiring visitors to slow and examine his building carefully as they approached. By forcing a slow journey from table to one’s mouth, the theory goes, the Martini glass requires the drinker to more closely consider what he or she is about to sip. It heightens anticipation.

This, of course, is nonsense. The design is a flaw, not a feature. The Martini glass is weary and worn. We should acknowledge its debt to a past full of haste and scientific style, then mix up a Martini (2:1, with a dash of orange bitters, please) and serve it in an elegant coupe, slowly, as nature and nurture intended.