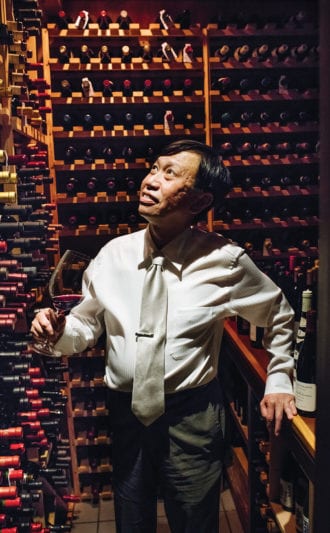 The Lucky Palace Chinese restaurant in northwest Louisiana’s Bossier City is about as far away from New Orleans as you can get without leaving the state. Located in a weathered no-tell motel just off the interstate, Lucky Palace doesn’t seem like the kind of place to draw national attention. But somehow, this Chinese restaurant with an unfathomably deep wine list landed on the James Beard Foundation’s radar last February, earning one of the 19 semifinalist spots for the Outstanding Wine Program award. Owner and noted (but offbeat) wine aficionado Kuan Lim didn’t even know his wine program was a semifinalist until his customers started calling him to share the good news.

In preparation for Lim’s 53rd birthday in May, his colleagues and friends acquired a 15-liter Nebuchadnezzar of Billecart-Salmon Brut Reserve Champagne and set it by the front door. In contrast to the hotel’s rundown lobby, the interior of the restaurant is all warm tones, deep colors and gold accents. It’s crammed full of regulars, often celebrating at the large “lazy Susan” table that commands the center of the dining room, or just having a weeknight dinner of comfort food. Lim often gathers a few of his friends and fellow oenophiles in the restaurant’s tiny bar area on Tuesdays to share wine along with plates of duck and scallion pancakes, ginger-jalapeno T-bone steak, and Thai green curry prawns. During one such informal tasting, Lim shared several bottles he’d been wanting to try from the Jura region in France, as well as a nicely dry Fattoria Moretto Lambrusco that he felt complemented the food.

Lim was born in Batu Pahat, Malaysia, and immigrated to the U.S. in the early ’80s, working in restaurants in Illinois. Tall, thin, with a shock of black hair, Lim looks like a man whose body is still in the process of recovering from the metastatic cancer that claimed his left leg on Valentine’s Day 2017, but with the glow of someone who’s been given a new lease on life. He uses a cane to get around the restaurant, talking to customers and watching over the bar and kitchen. Lim is soft-spoken but usually laughing, and quick to deflect praise and questions about both his successes and setbacks. He’s back at work now, but his physical absence from day-to-day life at the restaurant during that year and a half was a hardship not only to the tight-knit staff under the leadership of longtime manager Holly Lim (no relation), but to those in the Shreveport–Bossier City area who are fans of wine, food and Lim himself.

His hospitably priced wine cellar has considerable breadth and depth—a testament to his willingness to explore and taste. “It’s easy to build a great list on surefire tried-and-true wines that you know will always perform, and that style of list usually comes with a price,” says wine purveyor Wallace L. McKeel, a good friend of Lim’s. “His list is far more diverse and interesting, and tells a much truer tale of the constantly developing mind of a judicious buyer and wine lover who’s willing to give good wine a chance, no matter its background.”

Lim’s organization of the wine, McKeel says, is incredibly bizarre. “I honestly don’t know how his staff finds what they need. It’s the hallmark of great communication.” The Lucky Palace wine “cellar” is actually spread throughout the restaurant in random hidey-holes tucked away in various corners. There’s a tiny bottle room visible to diners that’s crammed full of hidden treasures, along with a Champagne fridge in the hallway outside the kitchen and another refrigerator in a hallway leading to a broom closet. “Lim is the most gracious host. Ever,” says Angie White, co-chair of Slow Food North Louisiana. “It’s so clear that he’s just genuinely passionate about wine and he’s not pretentious at all. He’s so far from pretentious that I don’t even know the right words to use.”

In August 1997, Lim and his now ex-wife were en route to San Antonio to explore restaurant options, and on the way, they stopped in Bossier City and stayed in a Bossier City motel, which at that time was a Ramada Inn and housed another Chinese restaurant. “They weren’t doing well and wanted to sell. I thought it was a good opportunity,” Lim says. “I never made it to San Antonio. Stayed here, looked around the town. I liked that it was small—people know each other.” Lim took over the restaurant, developing new recipes, and soon, Asian high rollers from nearby casinos stopped in. “They would say, ‘You need a better wine list,’ ” Lim recalls. “Most of them didn’t know fine wine, but they wanted to see the names. Then they would think it’s a better-quality restaurant.”

Lim says that back then he didn’t know much about wine, but he was ready to learn. “I knew a few things, like Blue Nun,” he says. “That’s what we drank back then.” His self-guided education began with reading everything he could find about wine. Then, every Sunday, he’d invite local wine drinkers to bring in wine to taste and discuss. “Every morning at 7 o’clock I’d start reading for two hours before I came in to work, then on Sunday I got to taste. And that’s how I learned.”

The collection that Lim has built since then is diverse, unpretentious, well-researched and accessible, filled with bottles of all different price points purchased and held over the years. “It’s almost like treasure hunting at Lucky Palace,” says McKeel. “Most people back in the ’90s weren’t long-term storing things like Marietta Old Vine Red or entry-level Burgundies, but he happened to have them lying around. It’s almost like he had a sixth sense that one day some geeky wine folks would walk in there and start poking around.”

For example, a 1997 Argyle Brut Rosé surprised a group of Lucky Palace blind tasters—including Lim—by holding its own versus four high-quality Champagnes. Even a humble screw-top New Zealand Chardonnay, aged in the restaurant’s magical storage for 15 years, shines when finally poured. The wine in question, a 2003 Kumeu River Chardonnay, is one that would normally have been opened years before, but stunned Lim and his friends who tasted it one night. “It was a contender against a similarly aged Meursault, and is seriously one of the more impressive New World Chardonnays I’ve had, never mind its underdog provenance,” says McKeel.

Today, Lucky Palace attracts visitors from around the world: Laurent Ponsot of Domaine Ponsot; representatives from California wineries like Morgan, Hope & Grace and Saxon Brown; and food writers, such as Southern Foodways Alliance director John T. Edge. Wine writer Clive Coates would make regular visits to drink wine with Lim; they partnered on a few wine dinners, which would further highlight the incongruence between the level of food and wine at Lucky Palace and the space it occupied. “At one dinner, we opened some old white Burgundies, ate some really good food, and it was incredible to see the people who showed up for him,” McKeel says. “It was funny, though—we’re with this renowned food writer, and everybody’s feet are sticking to the old carpet. There’s water staining the ceiling tiles, and you’re thinking, ‘What the heck is going on?’ ” (The restaurant’s interior has since been fully renovated.)

How all these out-of-town guests found their way to the unassuming restaurant is a bit of a mystery, but word of mouth over Lim’s 20-year tenure from chefs and wine lovers drove many travelers there, along with frequent recognition from publications like Wine Spectator and Wine Enthusiast.

One of Lim’s more successful events was a Riesling and fried-chicken dinner, where Lim surprised and delighted attendees by dressing up as Colonel Sanders, complete with white suit, wig and goatee. “But that’s also when he let those close to him know he was ill,” McKeel recalls. “He didn’t want people to know, but he was feeling really bad, until finally, he was like, ‘I think I’m going to have to go to the doctor.’ ”

The diagnosis was osteosarcoma in the knee. Lim underwent surgery and chemotherapy, and then discovered the effected leg would have to be amputated. The community stepped up to help, bringing Lim groceries, helping him with errands, and organizing a fundraiser in one of Bossier City’s casinos. “You didn’t want to ask too many questions, but you also desperately wanted to know if he was okay,” Angie White says. “I think a lot of people kept going to the restaurant for that reason—to find out how he was doing and maybe, just maybe, he might be there one night that you were.”

While he was recovering, Holly Lim stepped in to manage the restaurant’s day-to-day operations, with text and phone support from Lim. “But once he turned the corner and came back, it cranked up to 10,” McKeel says. “They’re firing on all cylinders now.”

“All the interest in Lucky Palace right now is giving us the opportunity to help people understand that it’s a really quirky place,” says Chris Jay of the Shreveport-Bossier Convention and Tourist Bureau. “If you just heard that it was a great wine place, and you planned a trip, you might be kind of surprised at what you encounter. But if you heard the whole story of this incredible wine cellar in a roadside motel, then you’re signed up for an experience.”

At Lim’s birthday party in May, the Nebuchadnezzar of Champagne was opened and all 15 liters polished off within 45 minutes. McKeel says at one point there were more than 70 open bottles of wine. For local admirers and faraway fans, it’s a privilege to be in this moment with Lim. “It’s been fun to see an increasing appreciation of how unique Lucky Palace is,” says Jay. “It’s been a joy to see it bringing in a new generation of fans. It makes me happy.”

Nora McGunnigle writes about beer, food, booze, travel, and culture from her home base (and inspiration for all of the above) in New Orleans. Her focus on beer writing brought her work to Beer Advocate, Craft Beer and Brewing, CraftBeer.com, and All About Beer, and her food and travel writing can be found in Country Roads, Thrillist, GoNOLA.com, and Where Traveler. Although she loves a good pilsner or saison, when the hard stuff calls, it's usually a Negroni or Manhattan in her hand.

A fresh and juicy red wine to welcome the changing seasons.