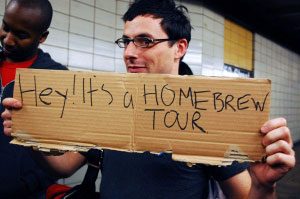 Mary Izett has several sour beers in various stages of fermentation—she’s preparing to attempt a pistachio stout, and she’s planning to make a mead this weekend. This might sound like standard practice for the president of a homebrew club, but Izett, who oversees the New York City Homebrewers Guild, is accomplishing this in the kitchen of her 650-square-foot Brooklyn apartment. Why would Izett and an estimated 300 to 500 other New York City homebrewers give up precious square footage to carboys and brewpots? All for the love of fresh beer.

Join the Club
Big Apple homebrewers might lack the sprawling garages and basements of their suburban counterparts, but what they do have is plenty of company. “We have an incredibly active homebrewing community,” says Izett, noting that there’s at least one homebrewing club in almost every borough. “And everyone is very generous in sharing beer, ideas and feedback.” In addition to the NYCHG, city dwellers can join the Malted Barley Appreciation Society, the Knights of Bruklyn Homebrewers Sentry and other clubs. And NYC competitions like the American Homebrewers Association–sanctioned Homebrew Alley are incredibly popular, with 670 bottled entered in that contest alone this year.

Gear Up
In Brooklyn, three shops—Brooklyn Homebrew, Bitter & Esters and the Brooklyn Brew Shop—cater specifically to homebrewers, selling equipment and supplies and doling out advice. Other businesses, like the Brooklyn Kitchen, sell brewing supplies and offer classes and events for the brew-curious. “And really, the homebrewers here [in New York City] are the best resource,” says Izett. “There’s a wealth of knowledge and inspiration here.” One of the best ways to rub elbows with other homebrewers is to attend one of the local beer festivals, where homebrews are often poured alongside pro beers, or events like the Diamond bar’s annual Brew n’ Chew homebrew-and-food-pairing competition. Another way to get up close and personal with established New York City homebrewers is to sign up for the Brooklyn Homebrew Tour led by Imbibe contributor Joshua M. Bernstein. “Five years ago, homebrewing in New York City was more of a challenge,” says Bernstein. “There were no homebrew-supply shops in town, and you had to order most of your grains and hops online. Nowadays, there are three dedicated homebrew-supply shops in Brooklyn, and even Whole Foods sells grains. I’ve watched homebrewing grow from an against-all-odds endeavor to a hobby that’s been embraced by the mainstream.”

The Heat Is On
Aside from square footage, one of the biggest challenges facing New York City homebrewers is the summer heat and scarcity of air conditioning. “Our weather swings mean that brewers are constantly fighting the fermentation battle,” Bernstein says. Some people give up brewing entirely for the summer, Izett notes, while others switch to styles that can ferment under higher temperatures, like saisons. Another big city setback? “Say you live on a fifth-floor walkup with no elevator,” says Bernstein. “Hefting a 55-pound sack of grain upstairs is a pain in the rear end. And the back. And knees.” And public transportation is both a blessing and a curse. “A lot of people here don’t have cars, so getting supplies home and kegs to parties can be challenging,” notes Izett. But on the other hand, she says, “Public transportation is a plus—no need to worry about drinking and driving after a homebrew meeting.”