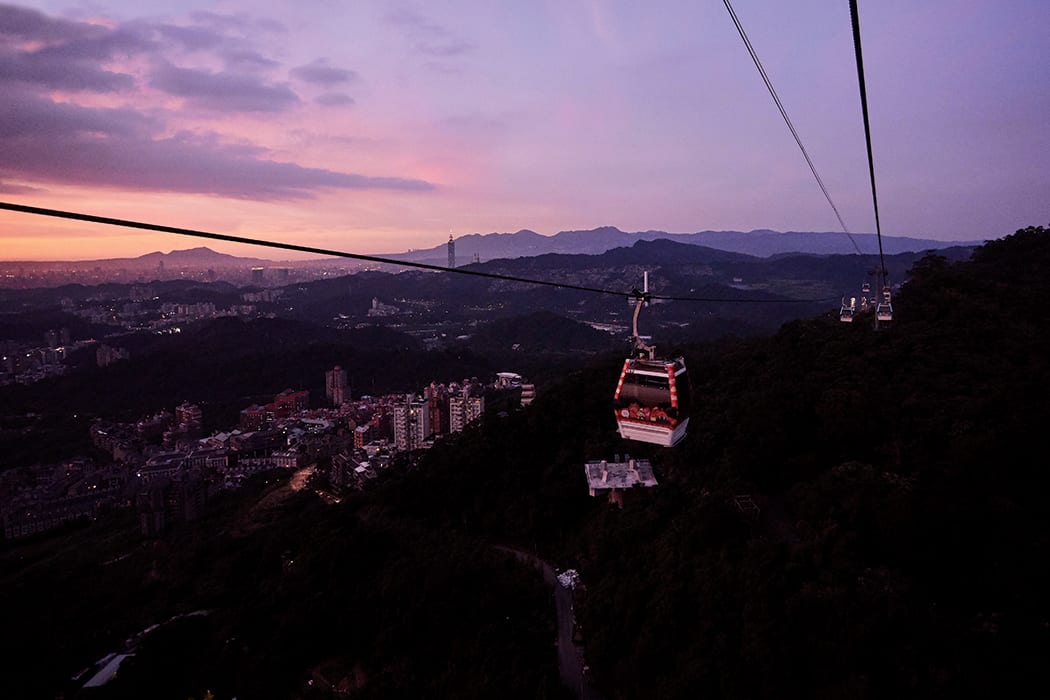 More than a thousand feet above downtown Taipei, the humid air of spring turns to mist. As our gondola climbs up the mountain, the rigidity of the city’s brutalist skyline gives way to the hazy and imaginary. Ornate Buddhist temples poke through treetops in the distance. Country cottages beneath our feet appear to have been yanked from a Miyazaki film. Through the gondola’s glass floor, we scan a forest dappled with terraced tea gardens, just out of focus, just too perfect to exist.

The entrance to Maokong village is guarded by a perky Pokemon-like enamel kitten beckoning us toward a little ice cream shop. Who are we to disobey the kitten? We lap up squiggles of oolong-flavored soft serve and make our way up the foot-path to the dragon kiln. In New England, you drive your family to pumpkin patches for hayrides and cider doughnuts. In Taipei, you fly gondolas up to Maokong for tea.

Every year, my friend Theresa Wong locks up her New York City tea boutique, T Shop, and jets back home to Asia to rekindle relationships with farmers and meet new tea friends. I’ve followed her to Taiwan to get a taste of that journey firsthand, but before we head down to the central mountain range—the nation’s brew basket—we’ve taken a day to appreciate Taipei tea culture the way locals do.

For more than a century, this mountainous corner of Taipei’s Wenshan district has been one of Taiwan’s most important tea-growing centers. Many Taiwanese can trace their heritage back to émigrés from Fujian, a southern Chinese province with a long tradition of teamaking. Those Fujianese settlers brought their teas with them, and in Taipei’s Muzha district (what’s now known as Wenshan), a few planters noticed that the hilly soil and misty climate were just right for the famous tieguanyin tea bushes from Fujian’s Anxi County.

The tea became a brand of its own—Muzha tieguanyin—and even though today’s most prized productions come from less trafficked parts of northern Taiwan, Maokong remains synonymous with the fragrant roasted tea. The local government opened the gondolas in 2007 to facilitate tourism, and the area has since evolved into a bucolic village where visitors walk among the tea fields, taste brews at dozens of farm-owned shops, hike trails to hidden temples, and immerse themselves in their tea-stained history.

You’ll find similar attractions in other famed tea regions, such as Hangzhou’s historic Dragon Well village, which draws visitors by the busload, and a spate of tourism-driven tea estates throughout India and Sri Lanka, which all too often lean into a creepily colonial vibe. At Maokong, the shtick is comparatively subtle: fewer crowds, mellower salesmanship, way less tour-bus pollution choking purportedly sacred tea bushes. Tea is ubiquitous in Taiwan and China, but genuine places to explore and study it, as a foreigner or even a local, can be surprisingly hard to find.

The dragon kiln is a long, brick-lined hobbit house that follows the mountain’s natural incline. Chinese potters have been using coal-fired ovens like it for millenia, and the main principles haven’t changed much in that time: The gradual heating of the upper parts of the kiln allow for the firing of paper-thin ceramic teapots and cups that are essential to Chinese tea practices. This particular kiln hasn’t been fired in years; like many sights in the village, it serves more as a historical exhibit for visitors than a functioning apparatus. Still, unless you befriend an old-school potter and poke around their oven, you won’t find many opportunities to climb inside one and appreciate the origins of these long-standing tea traditions.

Farther up the hill we start to see the tea shops. Shop owners occasionally change locations, a friend warned us ahead of time, and even with a Mandarin speaker leading the way, deciding where to start is as much about instinct as it is about advanced intel. Taiwan is famous for the hospitality of its tea culture, and most shops welcome anyone to come in and taste some tea on the house. For professional buyers like Theresa, building relationships at the tea table is crucial to running a business. Laypeople like me can simply enjoy the ride, and at one unassuming shop, our host has decided to take us on a drinking tour of Taiwanese tea.

We start with a dong ding from central Taiwan, sticky in the mouth like syrup, with a savory kick of sesame seed. Before we finish sipping from thimble-sized cups, our host has already moved on to some fu shou shan, a high-oxidation style made with tea leaves the size of my palm when unfurled, and processed to highlight an unmistakable citron aroma. Then comes the local tieguanyin, heavily roasted, as it should be in Muzha, with a ferocious twang and vanilla core.

Taiwan is an island of oolong, a style of tea usually described as partially oxidized, between an unoxidized green tea and near-fully oxidized black. But that definition elides a critical distinction; compared to oolong, most other specialty teas are child’s play. No style requires more skill and precision to grow and process a drinkable batch, and even a minute error at any point in the process can turn top-notch leaves into wretched tea.

Once picked, fresh tea leaves must be withered at precise temperatures, then agitated and bruised to develop enzymatic oxidation and coax phenol-rich juices from the stems and veins. Experienced tea makers keep meticulous records, but deciding when to halt oxidation usually comes down to their noses. Day and night, producers bury their faces into handfuls of leaves, sniffing and pinching to suss out signs of progress that’d take the rest of us decades to notice. After withering, the leaves get repeatedly rolled and baked at low temperatures to fix their flavor and aroma, then fired at higher temperatures to drive out lingering moisture. If this multiday, 24/7 torturous work isn’t enough for you, keep in mind that many oolongs, including Muzha tieguanyin, aren’t finished until they undergo a series of roasts that deepen their flavor, transforming cream and flowers into caramel and smoke. Then sellers have the privilege of sitting on their inventory for months or years, waiting for the harshest elements of the roast to mellow out so they can finally sell their tea.

The same way a wine’s name may refer to a varietal or cultivar, the term “tieguanyin” refers both to a specific root stock, the Hong Xin Tie cultivar, as well as a style of oolong tea, which is traditionally characterized by high oxidation and a powerful roast. The result is a brew redolent of grilled stone fruits and a sweet, lingering aroma that spills down the throat like a secret. “True” tieguanyin, as some drinkers call it, can only mean Hong Xin Tie leaves processed in the tieguanyin style. You need those leaves, traditionalists say, for their signature orchid aroma that balances the fiery roast, and for the guan yun, a mouthwatering sensation that tingles the sides of your tongue like an electric current.

These are the particulars that have made Muzha tieguanyin such an object of desire, in Taiwan and beyond its borders. While Taiwanese descendents of Fujianese immigrants keep the old tea tradition alive, producers on the Chinese mainland are largely abandoning the time-consuming processing and roasting of non-gxiang tieguanyin in favor of greener, unroasted styles that sell better on the modern market and require less skill and risk to make. In a stroke of irony, these mainland producers are actually following in the footsteps of Taiwanese tea companies that developed the greener styles in the first place, and which saw enormous commercial success in the 1980’s and ’90s. Old-timers from the mainland, Hong Kong or Singapore may tell you that Taiwan-grown tieguanyin lacks a certain oomph you only get from classic mainland productions, but it’s Taiwanese growers and roasters that are preserving the tea’s heady flavor for the future.

By the time we leave the shop, a light rain has crept down the mountain. We take refuge in a nearby teahouse that specializes in country-style Taiwanese dishes hard to find in downtown Taipei: fried rice speckled with roasted tea leaves; steamed mountain herbs; slender noodles bobbing in a broth enriched with tea-seed oil. A crew of 20-somethings at the table next door is snapping selfies and brewing tieguanyin the old-fashioned way: with a generous amount of leaf brewed to an espresso-like concentrate in small clay pots. It’d be a rare sight in downtown Taipei, where boba tea cafés are far more likely to capture the attention of younger drinkers. Gong fu cha, as this practice is often called, is more a relic of their grandparents’ generation. But a day in Maokong doesn’t just give visitors a chance to see tea production up close and replenish their stashes; it provides a place to participate in traditional tea culture.

From our seats near the window, we watch the early evening mist roll its way up the hill, swallowing a wide plot of tea bushes row by row. Theresa refills our pot, and while the leaves steep, we take a moment to sit and taste the air. Muzha tieguanyin often exhibits a rosy, fruity quality you don’t even notice until a few minutes after your last sip. You can’t rush tea like this; it unfolds slowly and stretches a moment into a casually intimate afternoon. We slurp up our thimbles and let the tieguanyin bloom. The kettle rumbles away for the next brew.

Is Maokong in your travel plans? Read tips on how to get there and which tea shops to visit here.