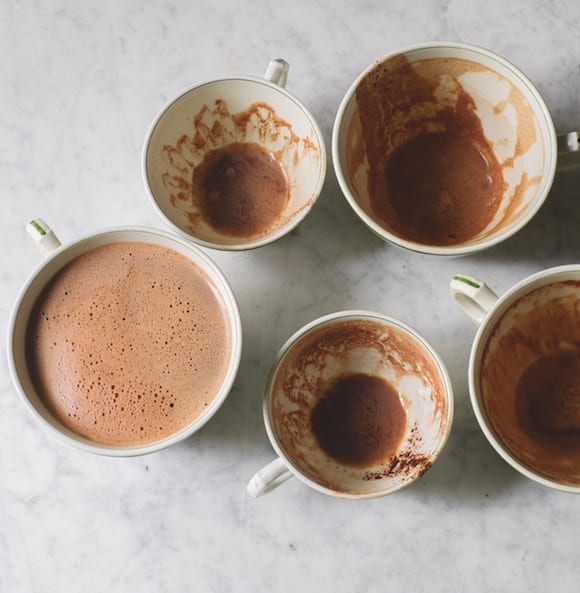 The hot cocoa of many a childhood came from a little paper packet with those tiny, freeze-dried marshmallows that would dissolve before they could even be eaten. Since then, hot cocoa has gotten a significant upgrade, and the quality of bean-to-bar (to liquid) drinking chocolates has simultaneously elevated. But what’s the difference between the two? “Hot cocoa is alkalized cocoa powder mixed with hot water or milk,” says Megan Giller, author of the new book Bean to Bar Chocolate: America’s Craft Chocolate Revolution. In the case of those paper packets, there’s also a hefty dose of sugar, powdered dairy, and usually some sort of hydrogenated fat. “Cocoa has really only been around since 1828, when a Dutch chemist named Coenraad Johannes van Houten patented a process for extracting cocoa butter from chocolate liquor (the ground-up nibs). He discovered that when he mixed cocoa powder with alkaline salts, it would combine well with water. The tiny marshmallows would come much later.”

Drinking chocolate, on the other hand, is just what it sounds like—chocolate you can drink. It’s made from finely grated cacao mixed with sugar, and many chocolatiers even use single-origin cocoa beans to highlight certain flavors. “If you’re looking for bean-to-bar chocolate, the first ingredient should always be cocoa beans, not chocolate or chocolate liquor,” says Giller. “I also avoid any chocolate with other fats besides cocoa butter (like butter oil), PGPR (an emulsifier made from glycerol), and vanillin (the synthetic version of vanillin).” With more specialty chocolate makers than ever before, quality options abound. So indulge your inner child with a decidedly grown-up treat.

Dick Taylor Single-Origin Belize Drinking Chocolate “Cocoa beans taste different depending on where they’re grown,” says Giller. “This single-origin from Belize has notes of dried plum and cherries with a floral finish.” Try mixing it with two parts liquid to one part chocolate for an extra-decadent cup. $18, dicktaylorchocolate.com

Xocolatl Drinking Chocolate The single-origin drinking chocolate from Atlanta’s Xocolatl is sourced from Nicaragua and is perfect for those who love the deliciously bitter bite of extra dark chocolate. $16, xocolatlchocolate.com

Fruition Sipping Chocolate Mix Fruition’s addition of a little sea salt balances nicely with the drink’s richness. “Chocolate maker Bryan Graham trained as a pastry chef and chocolatier, which means he knows how to blend beans from Peru and the Dominican Republic to create a delicious treat,” Giller says. $20.95, tastefruition.com