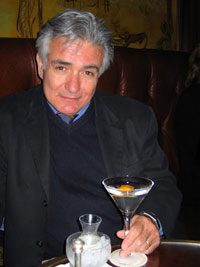 Dale DeGroff. DeGroff is a busy man, with his cabaret tour, “On the Town,” in full swing and a new eponymous brand of pimento bitters on the market, but we caught up with him to find out where the longtime bartender likes to head out for cocktails in Manhattan. Here are eight of his favorite bars in the city.

Employees Only
Dushan Zaric, co-owner of this West Village cocktail den has called DeGroff his mentor, and it turns out that DeGroff is a fan of Zaric’s bar. His favorite drink there? “Whatever Dushan is making,” DeGroff says, “It’s a good day already when he’s behind the bar.”
510 Hudson St.; 212-242-3021

King Cole Bar
For a taste of old New York, DeGroff heads to this elegant bar in the St. Regis Hotel, where the Bloody Mary—here called the Red Snapper—is said to have been born in 1934. But you might see DeGroff sipping a Manhattan or a Martini or, after dinner, “Cognac, Armagnac or Calvados—they have a great list,” he says.
2 E. 55th St.; 212-753-4500

Macao Trading Company
DeGroff has twice taken his traveling “On the Town” show to this dim, gorgeously gritty Tribeca bar and restaurant—opened and run by the team behind Employees Only. DeGroff likes their Firecracker cocktail—made with pisco, mezcal, lime and pineapple juices and five-spice bitters. And if he’s having dinner there, he’ll go for an Austrian Riesling.
311 Church St.; 212-431-8750

McSorley’s Old Ale House
“I will go here till the day I die—and believe me, it has that died-in look!” says DeGroff of this East Village saloon (reportedly New York City’s oldest). “I’m torn between the McSorley’s dark or light ale—especially since those are the only two alcoholic beverages they serve, DeGroff quips. “If Matthew Maher, the owner, is around, it’s a good day.”
15 E. Seventh St.; 212-474-9148

Pegu Club
At last year’s Tales of the Cocktail in New Orleans, Pegu Club founder Audrey Saunders won the award for Best Bar Mentor. Does that make her own mentor, Dale DeGroff, the king of all bar mentors? Indeed! “Pegu is my destination for flawless drinks,” he says. His favorite? A Gin-Gin Mule made by bartender Kenta Goto.
77 W. Houston St.; 212-473-7348

P.J. Clarke’s
“P.J. Clarke’s is my favorite saloon,” DeGroff says of the 128-year-old Midtown institution. He’s called P.J. Clarke’s bartender Doug Quinn the best in New York—and that’s saying something! His drink here is the same every time: “Glenlivet on the rocks,” says DeGroff. “I don’t have a choice because Doug has it on the bar when he sees me at the door!”
915 Third Ave.; 212-317-1616