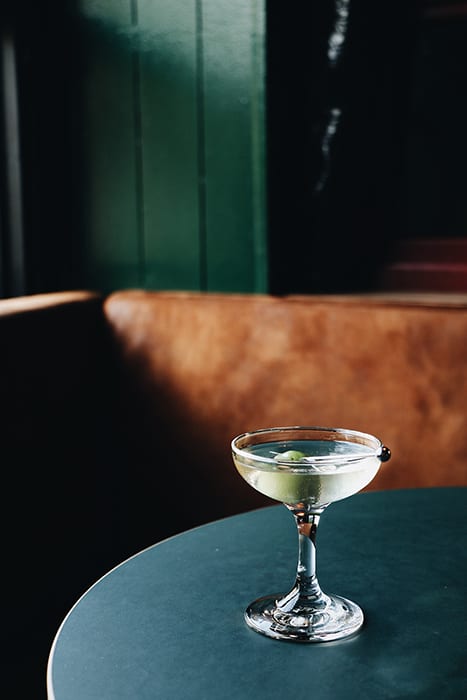 With breweries like Carlsberg and Mikkeller serving as household names throughout the country, Denmark has always been a land of beer drinkers, but in the past five to 10 years, cocktail bars have increasingly brought mixed drinks into the conversation. This trend is especially notable in the capital of Copenhagen, where cocktails reach the same level of quality as the city’s world-renowned food. From bars with a distinctly Scandi approach to others that tap into the city’s more international mindset, there’s a delicious cocktail around almost every corner. Here are a few of our favorite places to grab a drink when in town.

Lidkoeb
Sister bar to early cocktail pioneer Ruby (2007), Lidkoeb opened in 2012 with the goal of focusing on beer and wine, but after popular demand for cocktails, they decided to shift the agenda. Housed in a former pharmacy in the Versterbro neighborhood, the stunning three-story bar has a personality that’s a little brighter and more energetic than Ruby, which can come across as more formal. But despite its more youthful spirit, hygge vibes abound, with a roaring fireplace and soft glowing lights helping the coldest nights feel warm and cozy. Cocktails like the Tyve Tyve evoke fall flavors with gin, cacao nib-infused Lillet Blanc, carrot-parsnip syrup and lemon juice, while others like the Fersken Røg skew brighter with a bubbly blend of mezcal, peach liqueur, lime and Champagne. If you want a true taste of Scandinavia, go off-menu and order a “Nordic Negroni,” a sublime mix of aquavit, Gran Classico and Cocchi Americano.

Duck and Cover
One of the coziest bars in Copenhagen, Duck and Cover offers shelter from the outside world via a subterranean den located down the street from Lidkoeb in the Vesterbro neighborhood. Low lighting casts a moody blanket over the midcentury furniture that accents the various rooms, making it feel like a 1960’s-era living room. Meanwhile, the cocktail list tunes into local flavors with crystal clear precision. It’s not unusual to find drinks made with black currant leaves and gooseberries next to ones with spruce snaps and amber aquavit. For a real taste of Danish goodness, try the rød grød med fløde—inspired by a classic Danish dessert made with red berries and heavy cream, the drink combines aquavit, raspberries, lemon, egg white, and a pillowy float of whipped cream.

Gensyn Bar
Situated in Copenhagen’s Frederiksberg neighborhood, Gensyn Bar’s laid-back attitude makes it a popular spot for local bartenders (perhaps no surprise as the building was previously home to a local pub), who play pool in the back room and enjoy a solid selection of draught beers and whiskies. But it’s the cocktail menu that’s worth noting. Well-made classics like the Caiprinha and Manhattan keep things reliably approachable, while riffs on classics, like the Daiquiri Natural (Plantation 3 Star Rum, Forsyth 57% Rum, Wray & Nephew, Paranubes, Clairin Sajous, lime and sugar) get more adventurous. But you’ll likely want to order at least one Walnut Brown. Called the Best Cocktail in Denmark in 2018 by Bartender’s Choice Awards, it combines rye bread-infused bourbon, Drambuie, coffee liqueur, and bitters.

K-Bar
One of the pioneering cocktail bars of Copenhagen, K-Bar opened in 2002 with Kirsten Holms at the helm, and it hasn’t skipped a beat since. K-Bar consistently draws crowds from the nearby museum and shopping districts. The space is minimally decorated, letting the hospitality fill the void with a warm but easy-going assist. The no-holds-barred cocktail menu is eclectic, defined by ingredients from around the world punctuating modern creations like the Mekhong-Ki-Tong made with whiskey, chili, lemongrass, ginger, coriander, kaffir lime, and soda. Start with a bubbly aperitif like the Petite Louise with Aperol, elderflower liqueur (a Scandi favorite), vermouth, Champagne and rosemary, then wrap with the bittersweet Sunken Garden, made with Cynar, aquavit, blackcurrant rum, Lillet rosé, and bay leaf.

The Barking Dog
It might seem a little odd to find an agave spirits bar in the heart of Copenhagen, but even though The Barking Dog sits over 5,000 miles from the heart of mezcal production in Oaxaca, the bar staff has amassed a stellar selection of bottles that’ll impress even the most discerning mezcal and tequila fans. For cocktail drinkers, this laid-back Nørrebro neighborhood bar offers more than just pours of mezcal, too. A modern list of cocktails captures the soul of agave spirits in drinks like El Chapulin—a vibrant margarita riff with mezcal from San Luis Potosi, paired with Ancho Verde liqueur, lime and syrup, garnished with sal de chapulin, or grasshopper salt—while other original inventions and riffs on classics tap into the spirit of invention. Fans of rhum agricole might find a match in the hair-brained Xocolatl, which brings Mexican rum Paranubes together with creme de cacao and Nordic tonic water, while bitters lovers might find a better match in the Blackbird, a dark spin on the Paper Plane. You won’t find ingredients listed on the menu, so if you can’t parse the drink descriptions, which read like playful puzzles, the friendly bartenders will steer you towards a good fit.