Coffee and Bands: The Perfect Mix 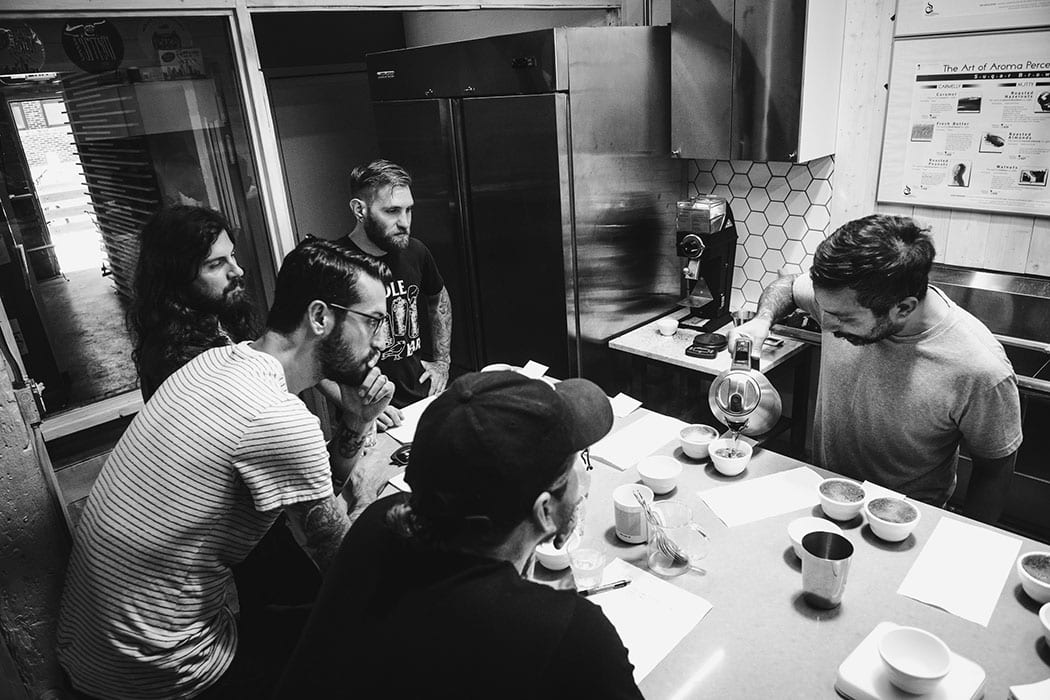 Musicians have long teamed up with breweries for special beer releases, but that spirit of collaboration has also been expanding in the coffee world. Some projects are one-offs, like Intelligentsia teaming up with St. Vincent for a “Bring Me Your Mugs” vinyl and coffee package and La Colombe partnering with Arcade Fire on a coffee to benefit projects in Haiti. Other collaborations are more long-term. Portola Coffee has an ongoing relationship with From Indian Lakes (several of the band members are actually baristas), with the most recent release taking place last year, and Counter Culture has teamed up with the Avett Brothers on multiple occasions, supplying coffee for the band’s New Year’s Eve shows for the past five years and most recently releasing a box set for last year’s album True Sadness.

“Besides helping them stay alert and focused, coffee allows bands something interesting to seek out when visiting new cities while on tour,” says Kyle Hodges, “minister of propaganda” for Dark Matter Coffee. The Chicago roaster has done dozens of band collaborations, and Hodges says there’s a natural creative connection between musicians and roasters. “Our company is made up of musicians, artists and creatives, so working with those types of people is natural.” From indie bands like Margot & the Nuclear So & Sos to punk acts like Descendants and an upcoming release with Metallica’s Kirk Hammett, Hodges says the Dark Matter crew appreciates the level of involvement most bands bring to the table. “Artists put the same attention to detail into making and learning about their coffee as their music and instruments. Their passion is easily noticed and appreciated, as it makes for fun collaborations.”

Metric Coffee founder Xavier Alexander kickstarted Metric’s collaboration series with one of his favorite groups O’Brother in 2016 and recently teamed up with The Devil Wears Prada on a limited-release coffee for their upcoming Chicago show. Alexander worked closely with the band through the entire process. “They said it was a dream come true for them because they love coffee and didn’t know a collaboration was even possible,” he says. The resulting pick was somewhat of a surprise for Metric. “It was funny because for a band that plays music that’s so heavy and in-your-face, they chose the most delicate and pretty coffee,” Alexander laughs. “We all saw the one they picked as complex and layered, like their music.”

Some bands have taken their passion for coffee even further. In August, Chris Guglielmo, Nick Ghanbarian and Vern Smith of Bayside launched their own roastery, Legal Speed Coffee & Supply, in Costa Mesa, California. Seeking out new and interesting coffees has always been part of their touring routine, and since opening Legal Speed they’ve done a few pop-ups at record stores and bike shops, in addition to selling beans online. “The fun part about coffee is everyone appreciates different things, so the possibilities of what we can offer in a roast seem endless,” Ghanbarian says.