A Look Back at Clarence’s Bar 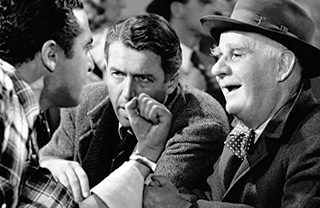 Every bar has a Clarence—or hopefully someone like him.

You remember Clarence—he’s the “Angel Second Class” hoping to earn his wings in the 1946 film It’s a Wonderful Life, the movie your parents made you watch around the holidays, and that you now make your kids watch.

And you may remember the plot: George Bailey is stuck in his parochial upstate New York hometown, running his family’s dull, marginal home-loan business. One Christmas Eve, dull turns to desperate—his business is on the brink of insolvency; George feels he’s failed his family. George leaves his house, gets tanked at a bar, then heads to a bridge to end it all, only to be intercepted by Clarence, sent from heaven in answer to the prayers of many who are concerned about George. Clarence shows George what Bedford Falls would look like had he never been born—a sad town of licentiousness and fallen characters. Chastened, George appreciates his life anew. The movie ends with everyone showering George with baskets of money.

Hollywood often traffics in archetypes, in part because it makes it easier for the audience to relate to their own lives. So Bedford Falls is a classic small town, and George a classic small-town banker. The film also features two archetypal bars—Martini’s and Nick’s—which are actually the same place under different circumstances.

Martini’s is an idealized small-town bar and restaurant, run by the felicitously named Giuseppe Martini, an immigrant George had helped with a home loan. When George stops by on his way to the fateful bridge, Martini’s is filled with holiday spirit. It’s lively and festive—George, of course, is neither, and Martini is concerned. “Why you drink so much, my friend?” asks Martini. “Please go home, Mr. Bailey.”

Every neighborhood has—or should have—a Martini’s, a place where they know you, and they know when something’s not right. In my New Orleans neighborhood, Martini’s is called The Kingpin. I’ve been there when someone from down the block showed up with the Grammy he’s just won and passed it down the bar so everyone could feel how heavy it was and celebrate with him. I was there another time when a neighbor came in agitated about having lost his house keys. Through the alchemy of sympathetic voices and beverage ethanol, the lost house keys miraculously transmogrified from catastrophe to trifling inconvenience.

But in the movie’s George-free alternate universe, Martini’s becomes Nick’s, a very different place. No longer a neighborhood joint, it’s now a honky-tonk with a barrel-house piano player and dancing. Nick isn’t the caring, neighborly type—he’s actually sort of a prick. When Clarence orders a “mulled wine, heavy on the cinnamon and light on the cloves,” Nick has no time for him. “Hey, look mister,” he says, “we serve hard drinks in here for men who want to get drunk fast.”

My neighborhood also has a Nick’s. It’s Le Bon Temps Roulé, a local bar where on Friday evenings there’s a righteous piano player, and folks from surrounding blocks come to shoot pool and smoke and eat oysters. In the back, there’s dancing. The bartenders aren’t as tetchy as Nick, but it’s not the place I’d ask for extra cinnamon on anything.

The Nick’s scene in the movie is complicated for the modern viewer. We know director Frank Capra wants us to find Nick’s bar disreputable and hateful—but it actually looks like a pretty agreeable place, save for grouchy Nick. (As does George-free Pottersville in general: as writer Gary Kamiya put it in a 2001 essay, Pottersville is a “combo pack of Sodom, Gomorrah, Times Square in 1972, Tokyo’s hostess district, San Francisco’s Barbary Coast ca. 1884 and one of those demon-infested burgs dimly visible in the background of a Hieronymus Bosch painting.” He concludes: “Pottersville rocks!”)

After watching It’s a Wonderful Life more times than I care to admit, I’ve concluded that there may actually be a third bar involved. I’ve come to think of it as Clarence’s Bar.
The film’s key message—that every person matters, no matter how humble their circumstances—always struck me as a little too Sally Fieldsian (You like me!) and something of a stretch when it comes to believing a single guy can reshape an entire town.

When it comes to bars, though, this is a bedrock notion. A bar isn’t a bar without the person behind it—it’s just a block of wood. Whether it’s Nick’s or Martini’s, a bar is not defined by the size of the ice cubes or the playlist or the selection of housemade bitters—it’s the people.

I have a Clarence’s Bar in New Orleans. It’s Arnaud’s French 75. It’s hard to imagine it being what it is without one person: head bartender Chris Hannah. Although no one has ever accused him of being a loquacious conversationalist, he’s a good person, so he attracts good people. When he thinks I might like to talk to someone down the bar, he introduces me. He also keeps a photo album behind the bar, filled with pictures of customers and friends. He shows it to people new to town and tells stories about other people who’ve come through the bar. He’s like a sea anchor, invisibly adjusting the heading. That he’s one of the most talented bartenders I know is a bonus—but that’s secondary. I go because of Chris, and because of the people who come to see him.

Every bar needs a Clarence. Who’s yours?