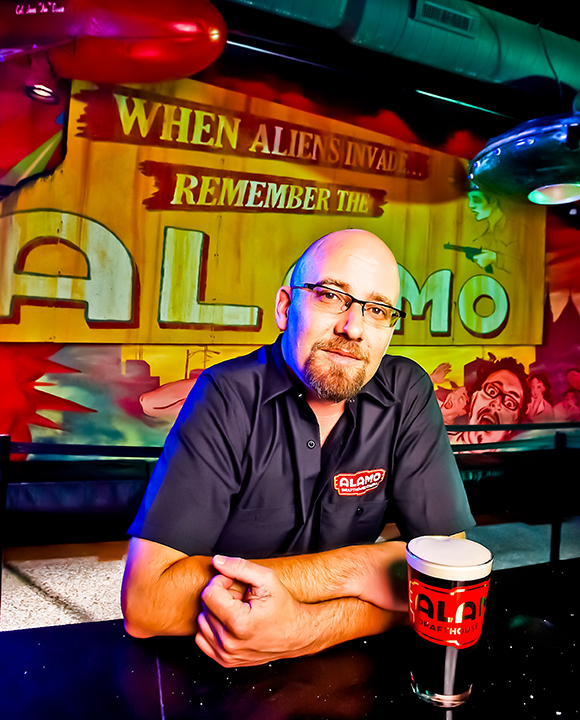 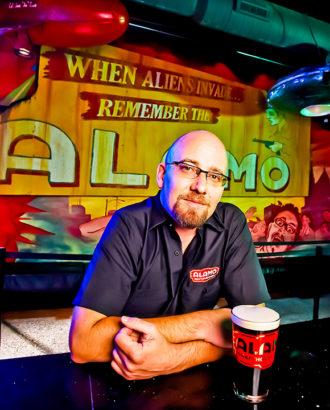 Austinites consider Bill Norris—one of our 2016 Imbibe 75 People to Watch—the bartender who helped spur the cocktail movement in Texas’ capital city. But for the past five years, Norris has been expanding his influence outside of Texas via a different platform: the movie theater.

Channeling his 21 years of experience (he’s also mixed drinks in New Jersey, New York and London), the Alamo Drafthouse beverage director oversees the beer, wine and cocktail selections for every location, from the flagship screens in Texas to the latest venues in San Francisco and Omaha, Nebraska (there are 22 locations open nationwide, with five more slated for 2016). Each location has a unique drinks scheme inside the theater and at its adjacent bars, which Norris often develops in partnership with the bar staff. He also collaborates on playful one-off cocktail lists to match movie premieres, he works with craft breweries on special releases, and he hires local talent and helps them reach their full potential behind the bar.

Norris’ knowledge of great cinema runs deep, so we spoke with him about his favorite moments in movie cocktails. Here are his top 5 drink-centric scenes in film.

Champagne Cocktail in Casablanca
Casablanca is the best movie about a bar ever made, period. While Yvonne’s order of a French 75 could be the choice here, I’m going with Victor Laszlo ordering a Champagne Cocktail, and the barman punching it up with some Cognac.

Dry Martini with an Olive in Carol
An almost brand-new scene, but such a powerful moment of characterization and plot, driven solely through a drink order in Todd Hayne’s beautiful new film. When Cate Blanchett’s Carol has her first lunch with Rooney Mara’s Therese, the tension and story are ratcheted up to a point that, watching, I needed a silky, ice cold martini myself.

The Manhattan in Some Like it Hot
Jack Lemon in a nightie produces a bottle of whiskey to woo Marilyn Monroe. Another of the ladies chips in some vermouth, cocktails are mixed up in a hot water bottle “shaker” and drinks are served in paper Dixie cups, proving that necessity is indeed the mother of invention.

Sweet Vermouth on the Rocks with a Twist in Groundhog Day
I love sweet vermouth, and with the explosion of high-quality vermouth available in the United States, you’re not doomed to drink it exactly the same way as Phil every day. My go-to for sweet vermouth is the Dolin Rouge, but Punt E Mes is great, and Vermouth del Professore is fast becoming a new favorite.

The White Russian in The Big Lebowski
This is almost a cliché, but let’s be honest, White Russian’s are delicious, and Jeff Bridge’s portrayal of The Dude is iconic. Try swapping in Sailor Jerry Spiced Rum for the vodka here for a deeper, spicier version of The Dude’s favorite. That said, I’m not down with the Dude’s powdered creamer variation.