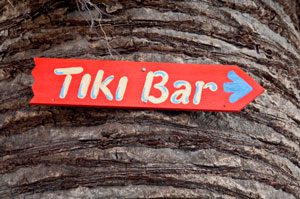 Tiki bars are back in a big way, and there’s no shortage of places to get your fix. From New York City to Los Angeles, with a few surprising stops in between, here are 9 spots that will whisk you away to a tropical paradise via an umbrella-bedecked rum-cocktail express.

Smuggler’s Cove
To say Smuggler’s Cove owner Martin Cate is passionate about rum would be a serious understatement. The menu at his Bay Area bar offers more than 400 bottles of the sugar-based spirit as well as 70+ cocktails that all offer their own little taste of the tropics. 650 Gough St., San Francisco; 415-869-1900

Hale Pele
Under the dim glow of puffer fish lanterns and the watchful eye of wooden tiki totems, this Portland cocktail den makes up for what it lacks in size by going big on fresh tropical island tastes with fresh-squeezed juices, specialty syrups and of course, oversized, flaming rum drinks. 2733 NE Broadway, Portland, Oregon; 503-281-8454

Three Dots and a Dash
Years in the planning, Paul McGee’s Chicago temple of tiki opened in 2013 and has been packed to the brim every night since. The menu is built around classics like the Mai Tai and Pearl Diver, but purists will appreciate the bars collection of more than 200 fine rums from around the world. 465 N. Clark St., Chicago; 312-610-4220

Tiki-Ti
In 1961, Ray Buhen—one of the original 1934 Don The Beachcomber’s bartenders—opened his own place in East Hollywood. Today, Ray’s son Michael and two grandsons, Mike and Mark carry on the torch of this late tiki great’s legendary Los Angeles drink den with more than 75 tropical libations, most of which Ray himself helped popularize. 4427 Sunset Blvd., Los Angeles; 323-669-9381

Forbidden Island
Step into Forbidden Island and prepare to be transported to a perfectly kitschy tiki territory from the ’50s and ’60s—a dimly lit world complete with thatched bamboo huts, glowing puffer fish and velvet Tahitian paintings. With a cocktail menu originally designed by rum man Martin Cate, Forbidden Island’s drinks run the tiki gamut from classic to contemporary, made with fresh-squeezed juices, housemade syrups and Bay Area spirits. And before you leave, write your name on a dollar bill and tack it to the ceiling—it’s an old Navy tradition signaling you’ll be back again. 1304 Lincoln Ave., Alameda, California; 510-749-0332

Psycho Suzi’s Motor Lounge
Midwesterners with a taste for tiki venture to this bi-level lounge resting along the Mississippi River, where with seating for near 1,000 people and more than 20 tropical drinks, you’re sure to stay in good company. 1900 Marshall St. NE, Minneapolis, Minnesota; 612-788-9069