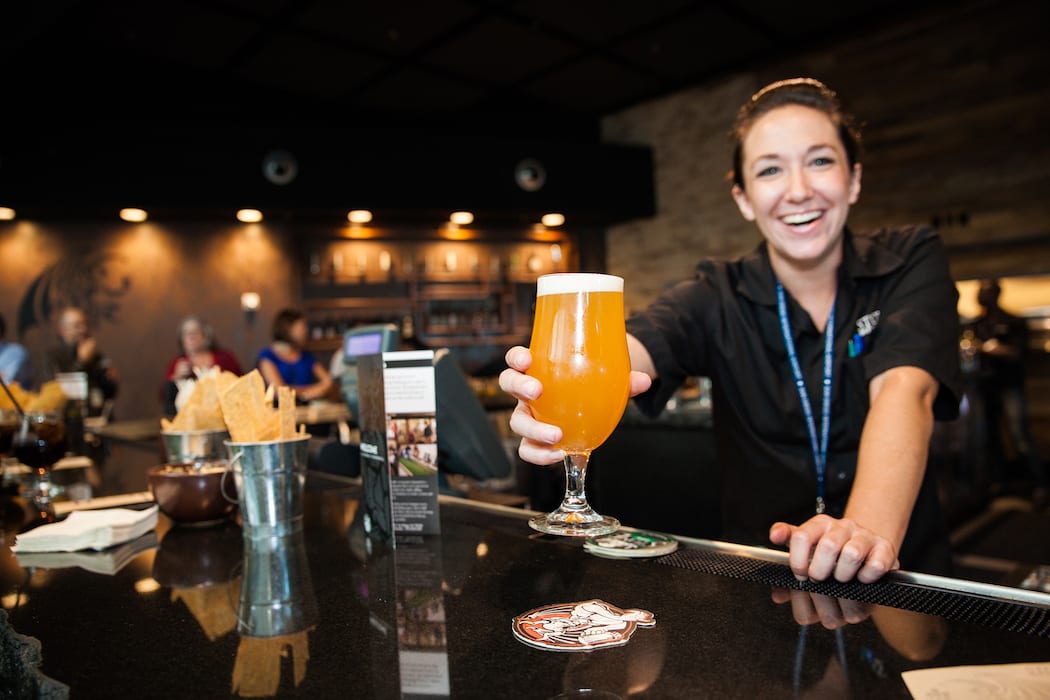 Air travel is not what it once was. Understatement, right? Today, it’s long lines, hefty fees, tiny seats and bad food. In short, an experience that calls for a stiff drink. Fortunately, this is where things have gotten better in some ways. Craft beer, for instance, is taking over terminals from Tampa to Seattle. Whether you’re nervous about a flight, celebrating the start of a vacation or just passing time during a layover, you can do it with a good beer in hand in any or all of the following cities.

Birmingham-Shuttlesworth International Airport (BHM)
Birmingham, Alabama
Birmingham isn’t on a lot of beer enthusiasts’ travel itineraries, but perhaps it should be. Good People Brewing Company opened its airport location in The Magic City in 2013, riding a wave of critical acclaim. According to brewery founder and co-owner Michael Sellers, their high-octane “Snake Handler” DIPA is far and away what’s poured most. At 10% abv, it’s probably responsible for the most inflight naps as well. “We wanted to be the first ones to welcome travelers to our fine city and to be the last thing people see on their way home,” he says. A good portion of the staff is Cicerone-certified, and their heart of dixie core collection—an IPA, pale, DIPA, brown ale, coffee oatmeal stout and American wheat ale—are all on draft.

Cleveland Hopkins International (CLE)
Cleveland, Ohio
Cleveland Hopkins International is where Great Lakes Brewing Co. introduces travelers to its offerings. In addition to a couple of guest pours, the brewery has about a half-dozen of its own beers on draft. Mainstays tend to include the Dortmunder Gold lager and the Edmund Fitzgerald porter. Great Lakes helped pioneer the craft beer movement in the midwest when it opened in Cleveland’s Ohio City neighborhood in 1986.

Denver International Airport (DIA)
Denver, Colorado
New Belgium Brewing Company headquarters is just about 70 miles away from DIA in Fort Collins. The 25-year-old brewery has a hub at Denver International, where iconic beers like the 1554 Black Lager and Ranger IPA are poured. There are seasonals and draft-only options too, like the Hop Kitchen Series (focusing on inventive hop bills) and the Lips of Faith series, a family of old-timey collaboration beers made in a Belgian vein, often with outside ingredients like spelt and malted sunflower seeds.

LaGuardia Airport (LGA)
New York, New York
While there are craft beer options in other metro airports like Newark and JFK, Biergarten at LaGuardia is the most compelling model. Brooklyn Brewery’s Garrett Oliver opened the beer hall in 2013, which features beers from all over the place, including smaller east coast outfits like Greenport Harbor Brewing Co. and Blue Point Brewing Company. Brooklyn Brewery beers feature prominently, as do Belgian beers by the bottle.

Minneapolis-St. Paul International Airport (MPS)
Minneapolis, Minnesota
The ambitious Stone Arch Craft Lab is underway at MPS and set to open this October. Sponsored by the Minnesota Craft Brewers Guild, this project boasts 25 taps focused on area beers. Guild members can sign up to have their beers featured and there are to be educational seminars by brewmasters for the public. Formerly a Chili’s, the lab will help spread the rapidly growing Minnesota beer gospel, a state now deservedly dubbed “the land of 10,000 brews.” Michelle Ranum of Aero Service Group, the firm behind the project, says the lab will stress food pairings that enhance what’s on draft. The two-story vat the lab is built around will serve as a beacon to traveling craft beer fans. “This airport is such a gateway to the rest of the country,” adds Ranum. “Fifty percent of airport traffic is just here for layovers, so this will be a great introduction to Minnesota beer.”

Portland International Airport (PDX)
Portland, Oregon
It’s fitting that “Beervana” would offer not one, but two local brew pubs at its airport. Rogue and Laurelwood each have outposts at PDX, the former offering its flagship Dead Guy Ale and the latter pouring pints of its award-winning Free Range Red, among others. Portland helped jumpstart the trend when Rogue opened its airport pub doors in 2007. In addition to roughly ten beers on tap, Rogue offers John’s Locker Stock, a special rotating beer made just for this location by brewmaster John Maier. Laurelwood’s half-dozen offerings include the Portland Pale Project, which expresses the broad scope of pale ales through different riffs by its brewing team.

San Diego International Airport (SAN)
San Diego, California
San Diego has become an outspoken voice in American beer thanks in part to Green Flash Brewing Co., Ballast Point Brewing and Modern Times Beer. Another key player in that ever-growing reputation, Stone Brewing, debuted its airport incarnation in 2013. Stone’s bar and restaurant in Terminal 2 is set up with 10 taps and enough space for 120 imbibers. The beers—far from shy and often tipping the ABV and IBU scales—feature prominently in the pub’s cuisine. Stone’s director of hospitality, Steve Robbins, says the Terminal 2 spot has exceeded expectations. It was recognized as Airport Bar of the Year by Airport Review News, a decoration Robbins equates to the Academy Awards for airports. And there’s a ripple effect, too: “These offerings give guests a small glimpse into the craft beer movement by presenting them with a taste that will leave them wanting to continue exploring craft beer options, wherever their final destination may be,” he says.