The Ice-Cold Alchemy of Beer Slushies 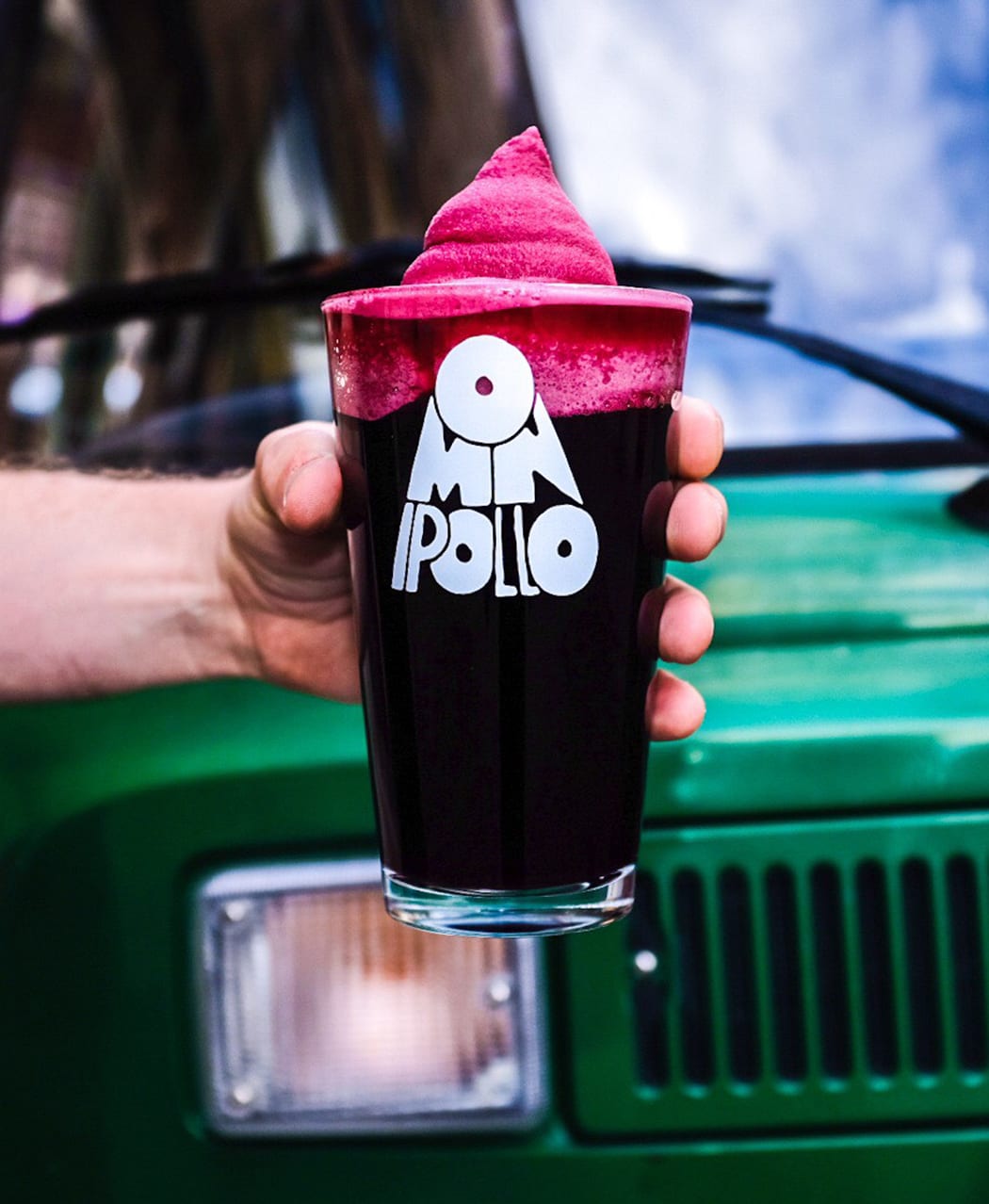 It’s unlikely, though not impossible, that the inklings of the beer slushy came from an arcade game. Think about it: In 1983, Tokyo-based game company Taito released their joysticked hit, Ice Cold Beer. The objective of the game was to maneuver a ball bearing suspended on a plank into a blinking hole while avoiding the other holes on the board. The backdrop? A hefty mug of freshly poured beer with an overflowing head of foam fluffier than a cloud. The holes? Sky-bound carbonation.

Ice-cold beer busted out of the arcade and into tangible form in Japan around 2010, when Asahi introduced its Super Dry beer poured from the tap at an extra crisp 28 degrees Fahrenheit. “Beer on tap is a really, really, really big thing in Japan,” says Kayoko Akabori, co-founder of Japan-made bar supplies store Umami Mart. “When it’s really hot out, they’ll advertise really cold beers. There’ll be a temperature gauge outside [the bar displaying] how cold the Asahi machine is.”

In March 2012, Kirin pushed beer even closer to Arctic climes with the Ichiban Shibori Frozen Draft: a draft beer topped with a multi-inch-thick angelic swirl of marshmallow fluff-like frozen foam. At that time, ice-cold beer was booming in Japan, says Tsuneo Mitsudomi, president of Kirin Brewery of America, and Kirin sought its own take on the trend that also served a practical purpose. Inspired by a frozen smoothie machine found in Italy, Kirin lab techs developed technology capable of whipping up beer—yes, 100 percent beer—into a froyo-like state. “We focused on the function which can keep beer cold, and magical looks,” Mitsudomi says.

Kirin spent roughly five years perfecting the texture and temperature (23 degrees Fahrenheit) of its frozen foam. An unorthodox lid, the layer of frozen foam not only prevents carbonation from quickly escaping, but also insulates the glass for 30 minutes, more time than it takes to polish off the average pint.

The emergence of ice-cold beer came at a time when Japanese beer was losing buzz among younger drinkers in the country: Though the Japanese mainstream beer market is the fourth largest in the world, it has remained largely stagnant since 2013. The novel beer slushy extended a picturesque invite to those who had since turned their backs on boring old beer. And sure enough, the slushy soon infiltrated the world of craft brewing. “My colleague, Karl Grandin, sent me a picture of a beer slushy that Kirin was selling in Tokyo,” says Henok Fentie, the Stolkholm-based co-founder and brewer at nomadic beer production company Omnipollo. “I believe the year was 2015, and we had just released a series of ice cream beers so I thought, what better way to serve these than as soft serves/slushies?”

After some trial and error, Omnipollo took the beer slushy to unknowable heights; if Kirin introduced the concept, Omnipollo made it a craveable superstar. Engineering a topping dubbed “soft serve,” Fentie captured psychedelic colors and layered flavors like pineapple peach passion candy sour and caramel ripple Texas pecan ice cream porter in pint glasses spiraled with his signature beer-made soft serve, also delivered in a rainbow of flavors. “For us, it’s a play with senses,” he says. “We have a blueberry vanilla ice cream beer in our portfolio that when served soft serve completely melts in your mouth. It’s an incredible sensation and one that could not be replicated without the temperature drop.”

Finding that sweet, cold spot takes some tinkering. “You want to minimize the size of the ice crystals that are forming,” says Ruben Dominguez, manager at Oakland beer bar The Trappist. For the past three years, Dominguez has served beer slushies from a rented slushy machine at Umami Mart’s annual Japan Beer Fest. “We were blending the beer in and frothing it up, so we were freezing nothing but the aerated beer foam or head, and freezing that very slowly so you had the tiny, smaller ice crystals that left a nicer texture.” It proved the festival’s quickest item to sell out.

Around the globe, there’s another practical function to something so tongue-numbingly cold: It serves as a balm to culinary heat. “Spicy food, icy cold beer, it was just a natural fit,” chef Ann Redding says of Uncle Boons, the award-winning New York City Thai restaurant she owns with her husband, chef Matt Danzer. At Uncle Boons, the beer slushy takes the form of bia wun, or jelly beer. Unlike other beer slushies, jelly beer is shaped and served in the bottle. A motorized barrel sourced from Thailand is filled with ice, water and salt, the bottles placed within. The whole apparatus gently rocks back and forth with the enthusiasm of a small dingy to agitate its contents. The salted water drops to 27 degrees, while the pressure inside the bottle keeps the beer from freezing over and exploding. Once the beer is removed from the barrel, the bottle is given a shake, then a sharp tap, and ice crystals begin to form within. As the cap is removed, the beer starts to froth and foam, freezing over in a molecular equation most often described as magic.

“The jelly beer thing … it’s a bit of a novelty for sure, but I think it’s fun for people to try,” Redding says. “It’s actually really authentic; if you go to any market outside and it’s super hot in Thailand, it’s just a way to keep beer ice cold.” (Redding, who was born in Thailand, first encountered jelly beer barrels under the guise of popsicle makers, only realizing during a trip back in her adulthood that there was, in fact, beer inside.)

As the temperature of beer dips, the flavor is affected: Bitterness is enhanced and subtler notes muted, so bars that serve jelly beer lean toward malty-sweet Thai beers like Chang and Singha. “Thai beers tend to be brewed in more of the German lager style,” says Jake Worth, assistant general manager at Thai restaurant Sway in Austin, where jelly beer is served year-round. Omnipollo’s Fentie sees the altered profile of a beer slushy as a gateway to experimental brewing. “A temperature drop means less flavor coming through, therefore it’s important to make very expressive beers to avoid a bland experience,” Fentie says. “We generally find that beers with a higher sugar content tend to work better frozen. They have a softer texture frozen.” In summary, flavor-boosting sugars good, hops … better served elsewhere.

While the aesthetic charm of a perfectly crowned beer slushy is undeniable Instagram bait, the off-feed attraction is real, as the style provides a new creative avenue to seasoned beer drinkers, bartenders and brewers. “The appeal is the presentation of something that’s already so familiar,” Dominguez says. “I feel like breweries are popping up left and right, and there are only so many different ways you can make an IPA. I think this was fun and appealing because I was presenting the same beverage that everyone is so familiar with—just in a new format.”

Plus, there’s just something inherently satisfying about frozen beer. “I think it brings out that childish enjoyment of drinking a slushy and doing something new and fun,” Redding says. Fentie, with his lineup of fantastical dessert beers, couldn’t agree more. “One hundred percent, yes,” he says. “We are children, just big children running a beer company.” 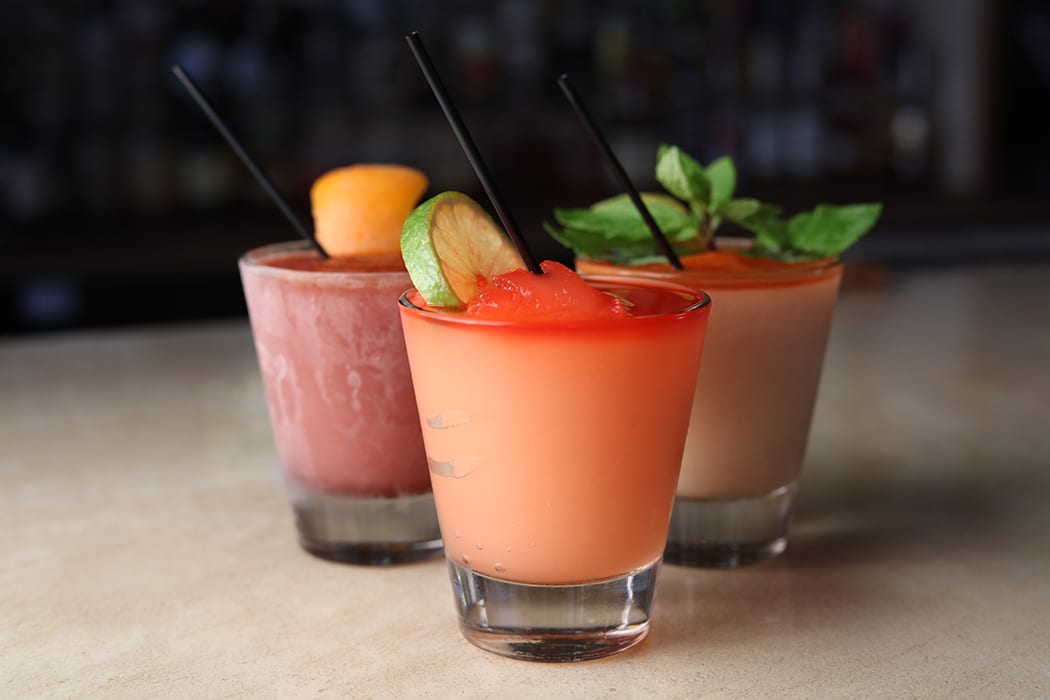