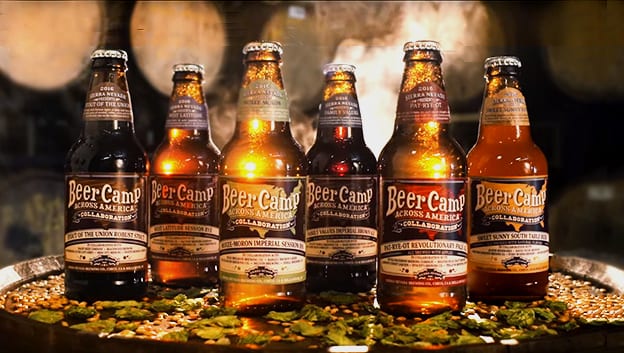 Imagine a craft beer industry softball tournament wherein six captains chose their own teams of heavy-hitting fellow brewers. In many ways, Sierra Nevada’s Beer Camp Across America (BCAA) series is just that. There’s an underlying competitive spirit, sure, but the main objective is to highlight the thriving state of American beer and how expansive it is, in terms of territory and style.

Six teams of five breweries combined to showcase something often overlooked in craft beer: regionality. The series—which just wrapped up and will take its creations on the road later this summer—is a case study of collaboration and geographic personality. Iconic regional ingredients like Hawaiian hibiscus, southern corn grits and Vermont apple cider were used to capture a flavor panorama of each territory. Take the Family Values Imperial Brown Ale, arguably the most extreme example of the terroir-focused series. It was brewed with cocoa nibs from Illinois, wild rice from Minnesota, honey from Indiana and hops from Michigan. And it was brewed by an all-star Midwest cast including Schell’s, Dark Horse, Half Acre, Perennial and Sun King. Per every team in the series, a Sierra Nevada brewer helped out along the way.

Other series beers of note include the West Latitude Session Rye, made with hibiscus and help in part from Hawaii’s Maui Brewing. The Pat-Rye-Ot is a riff on the pale from brewers located throughout what was once colonial America, with Revolution-era ingredients like apple cider. The Stout Of The Union makes the bold claim that a bunch of brewers from southern California can turn out much more than a light, surfy, session beer.

The brewing parameters were fairly loose, affording each team the chance to exercise their collective creative chops. About the only techniques that weren’t allowed related to production scale. It wasn’t feasible, for example, to barrel-age or sour any of the beers from the series.

BCAA started in 2014, the same year Sierra Nevada hit the one-million-barrels-per-year production mark. “We were busy opening our second brewery in North Carolina and felt we had reached a whole new level,” says Bill Manley, the label’s Beer Ambassador. “We wanted to celebrate, so we got together with some of our closest friends to create a variety pack of collaborative beers and take it on the road.”

That year, 12 brewers gathered at Sierra Nevada’s main headquarters in Chico. Manley appreciates the extra wiggle room this go-around, with three teams brewing in California and the other three operating out of the new east coast facility. “No matter how big you get, we’re still really excited to drink beer and talk about it,” Manley says. “All of the experimentation means that craft beer is in a good, healthy place. When it becomes a job, you’re doing it wrong.”

The beers of the series are available in 12-packs at most major grocers throughout the country, as well as select bottle shops and bars. They will also feature prominently at six major festivals this summer. Proceeds from the festivals will benefit non-profits that each team captain has chosen to help elevate the craft beer scene, such as the Florida Brewers Guild and Hop Growers of America, among others.