Mixopedia: A Brief History of the Bar Foot Rail 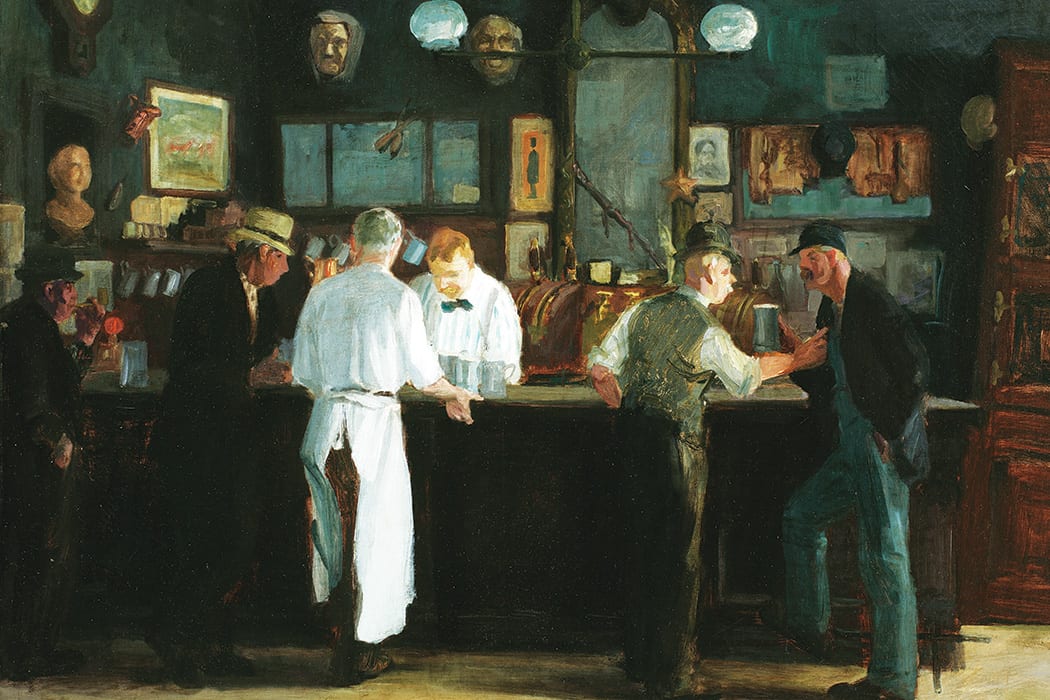 Foot rails in bars are noticeable mostly when they’re absent. You belly up to a bar, start pawing one foot in the air like a dog begging for a treat and find no firm platform upon which to land. You wonder: What kind of place is this?

Foot rails, of course, are those unheralded foot rests that run at ankle height the length of a bar. They’re often tubular and made of brass (brushed or polished), sometimes chromed, and occasionally comprise a long shelf of wood, which, frankly, makes for an unsatisfactory substitute. Lately, I’ve also seen many plumbed together of rustic iron piping, which matches the steampunk, Edison-lightbulb aesthetic favored by trendy bars.

The origin of the foot rail is murky. Some accounts say they’ve been around for “centuries,” but you don’t see them in paintings of taverns. (Then again, you won’t see many bars depicted in early tavern paintings; mostly it’s tables and tabards and genteel debauchery.) But foot rails were certainly flourishing by the end of the 19th century. Failed bars auctioning off their interiors mentioned them in ads, evidently to boost the price. In 1896, a newspaper man named Almyr W. Cooper died in a New York saloon, it was reported, after falling and striking the brass foot rail. (Or possibly not. “Miss Cooper, the dead man’s sister, is sure her brother met with foul play.”)

By far the largest company furnishing bars in the 1890s was Brunswick-Balke-Collender Co., whose mission was “to supply the saloon trade with any and everything pertaining to a saloon outfit.” They employed 3,000 nationwide and had offices in most every major city. Bar owners would order their ornate bars and backbars from catalogs and then add extras. Among these were the foot rails, which could be attached with four different styles of brackets, including one hinged like a pew kneeler, and another without supports connecting to the floor. “A practical saloon-keeper will readily see the advantage of this bracket,” read the catalog description, “on account of keeping the floor clean in front of the bar.” The fanciest foot rail I’ve come across was (and still is) in the venerable high-Victorian Crown Bar in Belfast, Northern Ireland, whose rail is heated.

The painter John Sloan did a series of paintings of McSorley’s Old Ale House in New York City around the turn of the last century, and most of these depict men at drink. (The bar allowed only men until 1970.) His most famous is a 1912 painting that includes a pair of men in what appears to be a lively debate. One stands with two soles firmly on the floor with an accusatory finger wagging; the other man faces him, one leg cocked upon the foot rail. (My reading of body language—a language in which I’m by no means fluent—is that a leg so positioned is a gesture of peace, and such a person is not on the cusp of fisticuffs.)

Foot rails are both altruistic and mercenary. They’re altruistic because they’re installed for the comfort of the drinker. They’re mercenary because the more comfortable drinkers are, the more they’ll spend. A modest investment in a foot rail can evidently lead to a pleasing return.

Turns out, humans aren’t really designed to stand for long periods with feet flat on the floor. This contributes to stress on the spine, and you can feel it in your lower back. A foot rail allows us to redistribute the load on our feet—first one foot, then the other—and alter the tilt of our spines. “Bartenders were probably the first ergonomics experts on the planet,” write the authors of Deskbound, a 2016 book about the hazards of the sedentary life. “A standing-height drinking table that you can lean on, with a place to rest your foot? Genius.” Also genius: A foot rail is not only better for your back, but helps you cut a better figure. Standing flat-footed renders everyone a bit oafish; raising one foot results in a more rakish profile.

Foot rails faded in importance for a simple reason: The workingman’s saloon, where one knocked back a shot or two and then quickly returned to work, were replaced by bars where people lingered. “Belly up to the bar” was not a facile metaphor, but a reasonably exact description of what one did. Then barkeeps found that if they added stools, people would linger and order more. (See: “mercenary.”) Today, the foot rail persists in a feral fashion, sometimes inconveniently. The legs of bar stools bump into them; the feet of customers can get entangled when dethroning, especially if tipsy.

Foot rails may be outdated in many bars, but they remain a brassy bit of genius. They should be encouraged elsewhere. A cook in Germany, I’ve read, had foot rails installed along her counter to aid long sessions of chopping or stirring. Modern versions are now being sold for those who’ve migrated to standing desks. And while I know of no museums that have installed them, I’d wager that foot rails would make an afternoon of admiration less trying on the back.

Genius, it turns out, is everywhere. Sometimes, it’s under your feet.