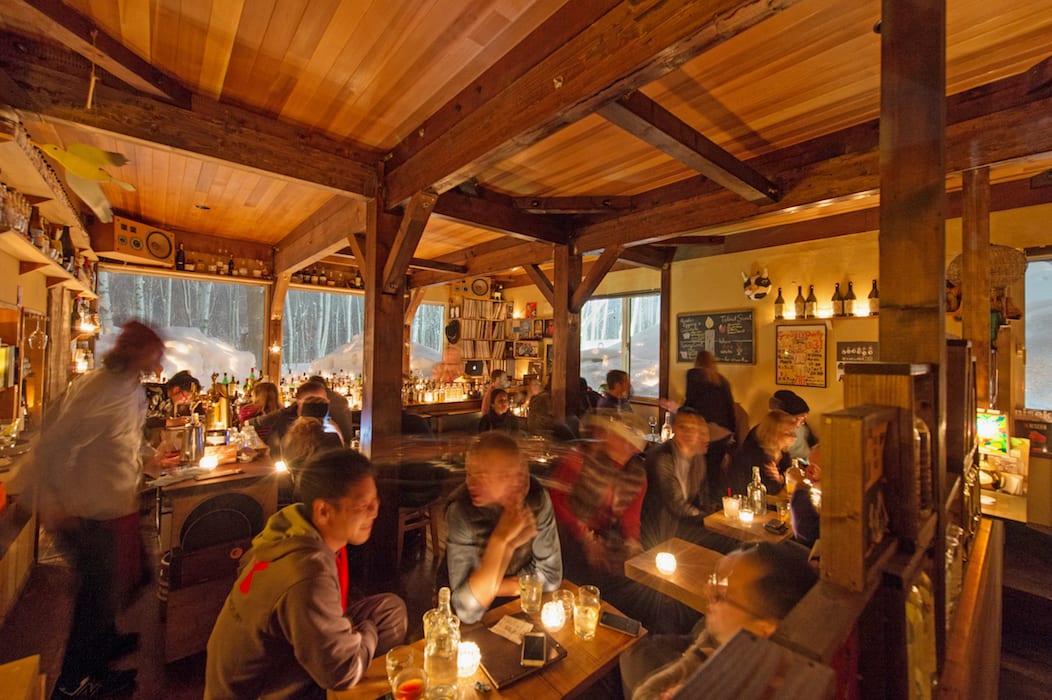 In the 2018 Imbibe 75 issue we highlight the growing drinks scene of Whistler, British Columbia, where by mid-afternoon, spots like Bar Oso and Coast Mountain Brewing buzz with snow enthusiasts looking to relax with a beer or cocktail. Increasingly, bars in ski towns are marrying mountain culture with the cocktail, beer and wine boom. “People aren’t satisfied—nor should they be—just coming to Aspen and seeing $5 Margaritas on an après-ski menu,” says beverage director Christopher Becker, beverage director of Mountain Social, which opened inside the St. Regis Aspen Resort last December.

Après-ski first arose in Norway alongside the mastery of downhill skiing in the mid-1800s. To refuel after such snowy feats, aquavit and potatoes were passed around the table. Soon after, the phenomenon moved out of European homes and into then-emerging year-round resorts in France and Switzerland. By that time, it had evolved into a fine food-and-drink-fueled bacchanalia celebrating “the daily escape from hypothermia on the vaulting terrain above,” wrote Morten Lund in 2007 in Skiing Heritage.

During the 1930s, as Prohibition waned and skiing gained traction stateside, après-ski culture catapulted into America’s growing mountain resort towns like Sun Valley, Idaho. Elsewhere around the globe, it took off later in the century. In Bariloche, at the base of Argentina’s Andes Mountains, brewpub Cerveza Blest opened in 1989 and continues to serve crowd favorites like their coffee-hinted Cream Stout. On Hokkaido, Japan’s northernmost island, Bar Gyu+ is in the midst of their 19th winter season in Niseko Village. Owners Hisashi Watanabe and Ioanna Morelli adapt the menu to play to their diverse customer base. “In December, it’s Singaporean holidays and we serve a lot of whisky; in January when Australian families are seen all over the slopes, we tend to serve a lot of hot cocktails and saké; come February, it’s Chinese New Year and yet again people’s tastes change,” says Morelli. “In March, we see a lot of European and North American guests and serve up cold beers and cocktails.”

Despite different interpretations of the ideal après-ski beverage, what is cross-culturally accepted is the need to wind down with a drink in hand, and American après offerings are starting to catch up to their European counterparts. Becker has watched Aspen’s drinks scene double down on cocktails in recent years, something he attributes to spots like Justice Snow’s and Jimmy’s. “They threw down a gauntlet with these amazing, artisanal cocktail lists that no one was really doing,” he says. “It pushed everyone in town to catch up. Six years later, you can see really fantastic results from that initial push.”

A hundred miles away, Vail’s scene received a serious upgrade in 2015 when The Remedy Bar opened in the Four Seasons Resort. Beverage director Steven Teaver draws on the bar’s peak-side surroundings in classically inspired cocktails that carry mountain flair, like the Magnus P.I. made with scotch, Douglas fir eau de vie and burnt sugar syrup. “I like to take inspiration from a few of Colorado’s notable elements: Summer bounty of fruit and produce that we use fresh and also preserve for use during the winter months,” Teaver says.

Mountain towns aren’t stopping at cocktails. Outside of Aspen, Woody Creek Distillers emerged on the scene in 2012 and has cultivated a reputation for award-winning spirits (many of which are used at Mountain Social). And mountain-made beer has been given new life with breweries like Boneyard Beer in Bend, Oregon, and Broken Compass Brewing in Breckenridge, Colorado.

Meanwhile, in Stowe, Vermont, the liquid revolution arrived in the form of wine. Cork Wine Bar & Market owner Danielle Nichols saw a natural connection between the Stowe lifestyle and organic wines. “Our selections come from small production, family-owned wineries that are conscientious of the impact they are making on the land,” she says. “We feel like this approach mirrors the way we choose to live our lives in the mountains.”