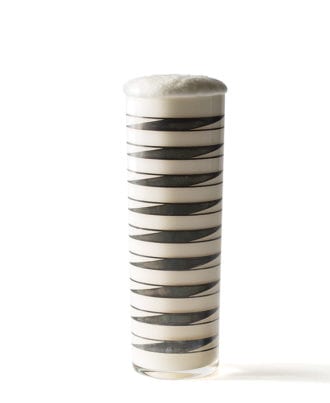 No drink showcases the miraculous shape-shifting nature of egg whites quite like the Ramos Gin Fizz. Topped with an architectural feat of whipped white that resembles a marshmallow after a trip to the microwave, this floral, gin-based refresher was brought to life in late 19th-century New Orleans by Henry C. Ramos and quickly became a citywide standard at Ramos’ Stag Saloon. The Ramos Gin Fizz (originally New Orleans Fizz) is both beloved by patrons for its bloomy nature (some swear by it as a hangover cure) and bemoaned by bartenders for its labor-intensive production. In Dale DeGroff’s book The Essential Cocktail, he notes that as many as a dozen “shaker boys” would be behind the bar at Ramos’ Stag to create a single fizz, with “the shaker going down the whole line, creating a spectacular show for the house specialty.”

At The Sazerac Bar inside the storied Roosevelt New Orleans hotel, approximately 20,000 Ramos Gin Fizzes are put away by patrons every year. Beverage manager Russ Bergeron believes the drink surpasses even the Sazerac itself as the city’s biggest contribution to classic cocktails. “I believe that Henry Ramos’ creation defines the culture of the city more—the brunch culture and what we call ‘eye openers’ on those menus,” he says. “It says a lot about how cocktails are as much a part of the city as the cuisine is, and how they both complement each other.”

Add ice to the glass to chill and set aside. Add all the ingredients (except the soda) to an ice-filled shaker and shake vigorously 50 times. Remove the ice from the glass and strain mixture into the glass from a distance to ensure froth. Top with club soda.

An update on the Old Pal from the Savoy Cocktail Book.