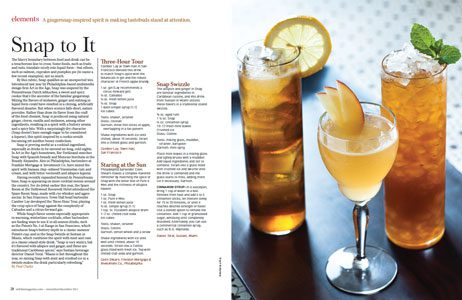 The blurry boundary between food and drink can be a treacherous line to cross. Some foods, such as fruits and nuts, translate nicely into liquid form—but others, such as salmon, cupcakes and pumpkin pie (to name a few recent examples), not so much.

By this rubric, Snap qualifies as an unexpected win. Introduced last year by Philadelphia-based multimedia design firm Art in the Age, Snap was inspired by the Pennsylvania Dutch lebkuchen, a sweet and spicy cookie that’s the ancestor of the familiar gingersnap. Mixing the flavors of molasses, ginger and nutmeg in liquid form could have resulted in a cloying, artificially flavored disaster. But where science falls short, nature provides. Rather than draw its flavor from the craft of the food chemist, Snap is produced using natural ginger, cloves, vanilla and molasses, among other ingredients, resulting in a spirit with a buttery aroma and a spicy bite. With a surprisingly dry character (Snap doesn’t have enough sugar to be considered a liqueur), this spirit inspired by a cookie avoids becoming yet another boozy confection.

Snap is proving useful as a cocktail ingredient, especially in drinks to be savored on long, cold nights. In Art in the Age’s hometown, Bar Ferdinand matches Snap with Spanish brandy and Mexican horchata in the Brandy Alejandro. Also in Philadelphia, bartenders at Franklin Mortgage & Investment Co. have mixed the spirit with banana chip–infused Venezuelan rum and cream, and with bitter vermouth and allspice liqueur.

Having recently expanded beyond its Pennsylvania base, Snap is appearing on more cocktail menus around the country. For its debut earlier this year, the Spare Room at the Hollywood Roosevelt Hotel introduced the Spare Room Snap, made with rye whiskey and agave nectar. In San Francisco, Town Hall head bartender Camber Lay developed the Three-Hour Tour, playing the crisp spice of Snap against the complexity of Calvados and a citrus-forward gin.

While Snap’s flavor seems especially appropriate in warming, wintertime cocktails, other bartenders are finding ways to use it in all-season drinks, such as the Pimm’s No. 3 at Range in San Francisco, which introduces Snap’s buttery depth to a classic summer Pimm’s cup; and in the Snap Swizzle at Sustain in Miami, which combines the spirit with mint and rum in a classic island-style drink. “Snap is very wintry, but it’s flavored with allspice and ginger, and those are traditional Caribbean spices,” says Sustain beverage director Daniel Toral. “Miami is hot throughout the year, so mixing Snap with mint and crushed ice in a swizzle makes the drink particularly refreshing.”