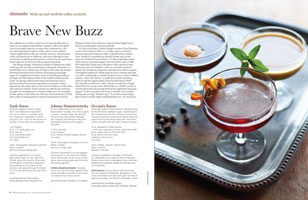 The coffeehouse and the corner bar are natural allies, but at times it’s an awkward friendship. Together, coffee and spirits can occasionally make for an awesome combination—the eye-opening Italian tradition of the caffe corretto and the cream-topped Irish Coffee are notable winners—but because coffee and spirits are so different, with each offering its own, sometimes conflicting interpretation of buzz, booze and beans have long been at their best when sipped separately.

But things change. Yesterday’s baseline of American coffee mixology may have been defined by a sharp jolt of bourbon to lend backbone to a bland cup of Folger’s, but today the border dividing bartenders from baristas is growing increasingly vague. Los Angeles bartenders, such as David Kupchinsky at Eveleigh and Matt Biancaniello at the Hollywood Roosevelt Hotel, are giving coffee’s usual soak-and-strain process a spirituous twist by substituting Italian vermouth or bitter liqueurs for the water; places such as Fort Defiance in Brooklyn and Liberty in Seattle, which operate as cafés by day and bars by night, are working micro-roasted coffees into the evening’s drinks; and at a time when the delicate, floral character of cold-brew coffee is winning fresh converts, bartenders at Eleven Madison Park in New York are using its fruity brightness to flavor powerful spirit-focused cocktails.

At Anvil in Houston, Bobby Heugel recruited David Buehrer, owner of Greenway Coffee Co., to help create a weekend brunch menu that features coffee cocktails with a creative bent. Buehrer’s contributions include drinks such as the espresso-fortified Occam’s Razor; a Coffee Caipirinha made with cachaça, turbinado sugar and iced coffee; and a Coffee Old Fashioned, made with cold-brew coffee and chocolaty Demerara rum. For Buehrer, coffee is a natural match for spirits, but its delicate character and distinctive flavor require a thoughtful approach. While espresso has a robust edge that can add a solid spark to a drink, Buehrer notes it takes a skilled barista—and a bit of time—to pull shots worth matching with an ethereal aged tequila in the Occam’s Razor. More bar-friendly is cold-brew coffee, which not only has a bright, lively flavor but is also more shelf stable, so a bottle can sit in a bartender’s well all evening without the ingredient losing its appeal. “Coffee can add more body to a drink, and a deeper feeling and an edge,” Buehrer says. “It can have such unique flavors that it works really well behind the bar.”