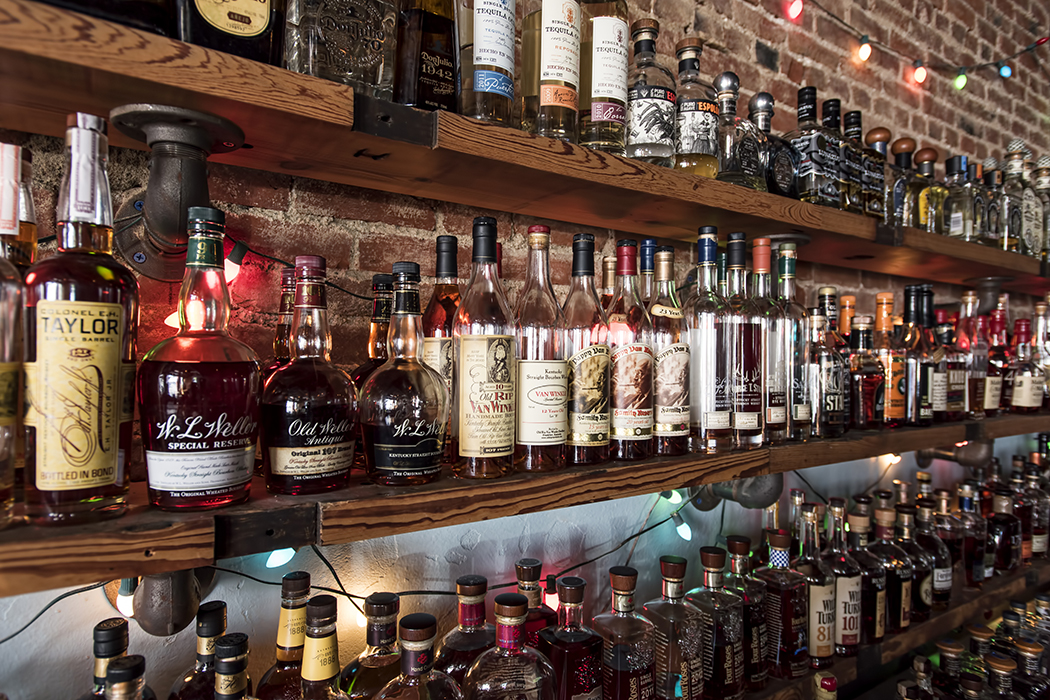 As part of our ongoing National Bourbon Heritage Month coverage (read the first article on essential bourbons here), Larry Rice of Louisville’s venerable whiskey haven The Silver Dollar weighs in on his favorite special occasion bourbons. In his own words, here are the bottles he’d choose for celebrating.

Parker’s Heritage Collection #5, 2011
Parker’s Heritage Collection is a limited release that Heaven Hill does every year, featuring a new whiskey released every time. The 2011 expression is finished in Cognac barrels for 10 years, weighing in at 100 proof. The Cognac definitely comes through on this one with raisin, pecans and grape jelly on the nose. Being non-chill filtered it retained all of its rich dark fruit flavors like plum and over-ripe cherries. At times it reminds me of a dry, rich red wine; finishing with lingering notes of cinnamon spice, plum, cherry preserves and pastries. If you’re celebrating something that would call for a good cigar, this is a fine pour to pair it with.

Four Roses Limited-Edition Small-Batch 125th Anniversary, 2013
The limited-edition small-batch series is a marriage of Four Roses’ best stocks, mixed by Jim Rutledge himself to create one of the most balanced and flavorful whiskeys you’ll pour past your lips. The 2013 release is Jim’s masterpiece. A blend of whiskeys as old as 18 years and as young as 13 years, this is an expression of older stocks that we probably won’t see again. It has aromas of hay, honeysuckle, grass, walnut, berries and nutmeg on the nose, and at a cask strength of 115.2 proof, the subsequent flavors explode with a rich mouthfeel. It has spice up front with other common flavors like cinnamon, nutmeg and pepper lingering throughout the taste and leading into dark sugars, toffee, ripe fruit like black cherries and raspberries. This bourbon is a perfect balance of spicy, floral, fruity and sweet.

Wild Turkey Tradition 14 year, 2009
This is the sleeper hit of the bunch; part of the distillery’s Master Distillers selection, bottled at the traditional (see what I did there?) 101 proof. With notes of straw, nutmeg, melon and orange pith it has unique aromas in the glass. The expected white pepper and cinnamon heavy Wild Turkey spice starts the tasting, leading into flavors of apricot, pie crust, candy corn, orange peel, cocoa powder and cotton candy. It finishes long with a sweet, lasting aftertaste that makes you wish you didn’t have to eat again so this flavor would just stay in your mouth forever. The best part: This is a special-occasion pour that won’t break the bank since it doesn’t have the typical special-release hype surrounding it.

William Larue Weller, 2014
This is one of the most sought-after special releases coming out of the Buffalo Trace Antique Collection. The wheat bourbon is bottled at barrel proof at 70% ABV. The flavor starts out hot so I suggest letting it breath for between 5 to 10 minutes before tasting. Bright green apple peel starts up front on the nose with lemon and orange zest, pencil shavings, grass and rose peddles rounding out the aroma. It has a nice balance of spice and sugar, with dominant notes of cracked white pepper and cinnamon for the upfront spice with candied cherries, molasses and crème brulee on the mid palate, and finishing with hints of lemon verbena, vanilla, taffy and cinnamon. This is a “she said yes” kind of special pour.

Pappy Van Winkle 20 year 2014
I wouldn’t be a special bourbon list without mentioning the ever-allusive, forever-hunted Pappy. If you’re someone who loves extra aged bourbons or tannic, dryer bourbons this is the one for you. The 2014 release specifically has a beautiful balance of tannins and sugar that a lot of older aged bourbons don’t seem to have. With hay, oak, waffles, leather, vanilla and peaches on the nose, it feels like you’re standing in a rickhouse just taking in all of the aromas. Upon first taste, an upfront spice of pepper and nutmeg leads into more herbal notes followed by burnt marshmallows, cooked apple and peaches with a long finish.