Who is Tiki Bob? 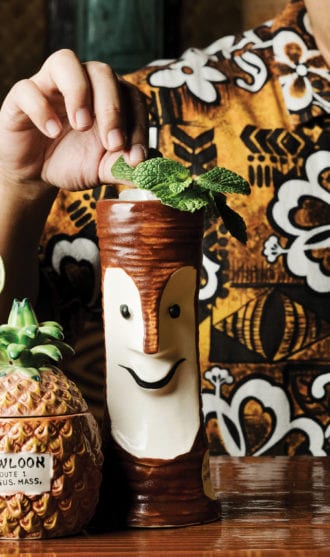 May I introduce you to Tiki Bob?

Oh, I see you’ve already met. That’s right … you met long ago, shortly before that unfortunate episode involving your brother- in-law and the plate-glass window. Did the lawyers sort that out? Good. Yes, of course, you remember Tiki Bob’s face, because it’s so hard to forget: two dots and a curved line. Basically.

Everyone has met Tiki Bob because Tiki Bob is everywhere. It’s one of the most widely copied and duplicated drinking mugs to emerge from that verdant world of cocktail exotica known as Tiki. Over the years, Bob has even escaped this rarified universe and clambered into general awareness. “It’s really the only full-on internet tiki meme,” says tiki authority Jeff “Beachbum” Berry.

Bob was evidently born in 1955, at a San Francisco restaurant called, not surprisingly, Tiki Bob’s. This was the brainchild of Bob Bryant, who for a time had been employed at Trader Vic’s. Then, in what one would like to believe was a fit of pique (although I’m not sure), he opened his own tiki palace a few blocks away. He added his own modernist twist to a tiki aesthetic, then entering its High Baroque phase. His open-faced tiki symbol—which looks a bit like a barn owl in a fun house mirror—became his bar’s calling card, and was even carved into a structural column fronting the bar’s exterior. (Bob’s column still stands today, painted green and overlooking the entrance of a crepe shop at the corner of Post and Taylor.)

Tiki Bob’s restaurant would go on to become something of a sensation. Bryant opened Tiki Bob II in Sacramento in 1957 (with “fanfare that will be echoed from Bakersfield to Eureka,” according to the Oakland Tribune), having first traveled to Pago Pago to bring back “two or three tons of relics, souvenirs and tropical decorations” for adornment. Bryant soon opened another branch in downtown San Francisco called, for inscrutable reasons, Tiki Bob’s Mainland.

“It’s a cute tiki,” notes Berry. “There’s nothing testosterone-y about it. It’s almost the stuffed animal of tiki mugs.”

Bryant’s record was not one of ceaseless success. In early 1959, the local police tried to close him down over what were referred to by Bryant as lunchtime “fashion shows.” (Others called them “panty parades.”) One news account noted that the luncheon crowd “enjoys cheesecake provided by the management”; models essentially paraded through the dining room in their underthings. Lunch service went from 45 to 450 lunches daily, largely drawing “financial district mavens,” a group noted for its keen discernment in all matters of fashion.

The city sent the police over to gauge the level of depravity— Tiki Bob’s had a bail bondsman with $20,000 at the ready when the cops arrived. The constabulary declined to arrest. One report noted “the young ladies wore baby doll hip-length pajamas and nebulous nighties.” Still, the IRS was harder to appease, and briefly locked the doors in the summer of 1959, noting that fashion shows were subject to an additional 20 percent “entertainment tax,” which Tiki Bob had little interest in forking over.

Matters took a darker turn in the summer of 1974, when an unemployed handyman ordered a drink, found himself short by 50 cents, and asked the couple on neighboring barstools if they could help him out. They declined, so he shot and killed them. All three Tiki Bob’s eventually shuttered, but his iconic mug has lived on, and even thrived. At first, the mug mostly populated thrift shops, but as the tiki revival started to take hold in the 1990s, ceramicists dusted off the concept and gave it a new gloss. “Every major mug maker has done a take on Tiki Bob,” says Berry.

Among the most influential and prolific mug makers is Bosko Hrnjak, the California artist credited with reviving the lost arts of carving wooden tiki heads and sculpting modern tiki mugs. Bosko says Tiki Bob may have been the “first tiki mug”—that is, one of the first that was actually called “tiki.” It represented “a very new, modern, sophisticated take on a tiki,” says Bosko. He estimates that he’s produced at least a dozen variations over the years, including a mildly disconcerting Cubist version.

So many Tiki Bobs have appeared, and so many were poorly crafted, that Bosko once swore off making them entirely. “It was getting ridiculous,” he says. “Two dots for eyes and a smile and, voila, you have a Bob.”

But that beguiling simplicity has undoubtedly contributed to its longevity. “It’s a cute tiki,” notes Berry. “There’s nothing testosterone-y about it. It’s almost the stuffed animal of tiki mugs.” Humans are hardwired to protect all things cute.

Tiki Bob remains forever placid and nonplussed, even amid the visual and aural chaos of a tiki bar. At first drink, he’s your stoic and enigmatic friend. You’re a bit unsure if he’s expressing disdain or approval of your lifestyle, but you know he has your back. Then, after two drinks, and three, Bob’s countenance becomes a bit more troubling in one’s mind. You stare at him, but he doesn’t stare back. You realize that Tiki Bob doesn’t judge you because he’s wholly disinterested in you. What’s more, his disinterest is eternal. Tiki Bob has found an inner peace. You are not part of it.

Tiki Bob is not for you. Tiki Bob is for the ages. With acceptance comes calm.