Perfect Day: Where to Drink in Bogotá 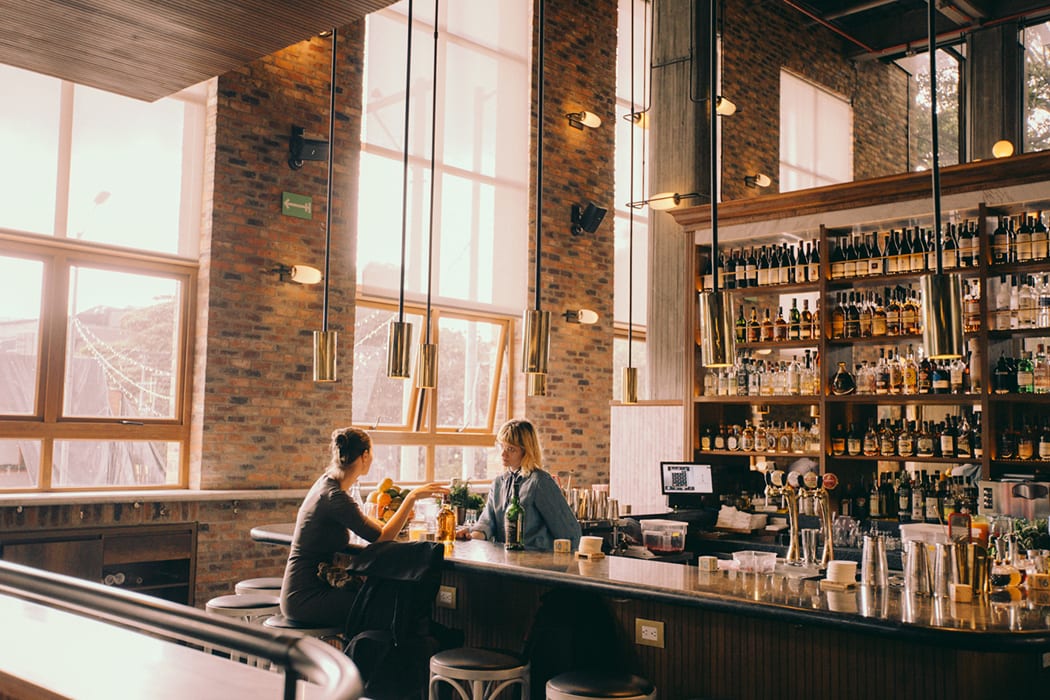 In 2016, Colombia emerged from the fog of more than 50 years of unrest and civil war. Culinary leaders have since worked to rebuild the country’s food and drink culture, and  its capital city is at the center of this rebirth. Bogotá has long been the cultural heart of Colombia (and its largest city, with more than 8 million residents), and its proximity to the nearby Amazon rainforest influences the city’s culinary tapestry. A year-round supply of fresh produce and diverse cultural influences (the country has a mix of Spanish, European, Afro-Caribbean and indigenous peoples) translates into a melting pot of vibrant ingredients, which appear in everything from hot chocolate to aguardiente, fruit eau de vie, beer and cocktails.

American expat Erin Rose, whose bartending résumé includes lauded programs like San Francisco’s Bourbon & Branch and Hard Water, moved to Bogotá two years ago. She now works for the Takami Group, a restaurant collective with some of the city’s best bars, including Black Bear, Cantina y Punto, and Segundo, where she bartends most often. Here, in her own words, Rose outlines a perfect day of drinking through Bogotá.

Breakfast
If it’s not raining, a short bike ride takes me to neighborhood café Mesa Salvaje. Their sunny dog-friendly terrace is perfect for enjoying a Chemex of Colombian coffee and the best toasts. If it’s stormy, I stop at Azahar, where they source and prepare great coffees from local growers that are paid stable, above-market rates. Their café in Parque 93, with its sunny pops of yellow on everything from the floor tiles to the locally made ceramic cups, makes me feel mellow yellow myself (at least until the coffee kicks in).

Market Breaks
I never get tired of visiting Bogotá’s markets—the best place to eat typical Colombian foods. Paloquemao is the biggest and most famous, but I recommend the more intimate Siete de Agosto. Take a break from shopping at Frutería Dary’s for a salpicón, a salad of chopped tropical fruits mixed with papaya and orange juices. One tip: Avoid the radioactive red salpicón colored with an “essencia” at the entrance and head straight to the natural goodness of Dary’s. You can even get one made in front of you with just OJ if you prefer. Two booths down, gotta stop for an arepa de choclo (sweet corn pastry with cheese) straight off the griddle. Another market I love is Samper Mendoza, which specializes in aromatic herbs. Before I go on the hunt, I’ll grab an aromatica de papayuela, cidrón and limonaría (infusion of mountain papaya, lemon verbena and lemongrass in hot water) and a queso cuajada with bocadillo (farmer’s cheese with guava paste) wrapped in a banana leaf.

Lunch
If I have a special guest for lunch, we’re going for the prix fixe menu at Prudencia, currently my favorite restaurant in Bogotá. Located in the historic center La Candelaria, the love and work put into the restaurant by owners (and husband and wife) Mario Rosero and Meghan Flanigan shows in every detail, from the architecture that combines the local bamboo with recycled materials to the wood-oven bread baked fresh each morning to their homemade spice blends. Even seemingly homely ingredients are made with care—smoked banana and maracuyá (passionfruit) ketchup anyone? And they always have a killer vegetarian option. If I’m on the run, sandwiches! Bogotá is sandwich and burger crazy right now—there’s a new place opening every week. I recommend Ugly American’s decadent burger selection that unites the best of gringo excess with hard-to-find ingredients from local producers (who knew someone was making Colombian cheddar?); Guerrero, whose sandwiches singlehandedly convinced me I could enjoy a portobello mushroom after years of mutual dislike; or La Cosmica’s fried chicken or cauliflower delights with crinkle cut fries and a local brew to wash it all down.

Afternoon Pick-Me-Up
The lull of mid-afternoon is the perfect time to relax with a tea at Taller de Té and chat about herbal medicine with co-founders Lala Herrera and Laura Cahnspeyer. They create their own infusions from local Colombian plants. For a little jolt of energy (“and human connection,” says Lala), I go for the Ayu, which blends hand-toasted coca leaf from the Santa Marta mountains with dried feijoa fruit and ginger, or the Cacao Vital, with cacao husk, mint and the caffeine-rich Amazonian plant guayusa. Or I head to El Sindicato, a small bar in the party-hearty Zona T that has the largest selection of microbrews in Bogotá, for beers and people watching with my co-bartenders. Right now I’m loving Cerveceria Non Grata’s MandarIPA, an IPA made with mandarin orange. The crazy geniuses of Non Grata lugged 26 liters of water on foot to be blessed at the Pope’s appearance in Bogotá last year so that they could make a beer with holy water. I am still anxiously awaiting its release.

Happy Hour
Before I head to dinner, I’ll pop by one of our spots to visit the bartenders. I’m lucky I work for a group with good bars! I usually order one of the cocktails that features a local ingredient, like the El Coyote with mezcal and coca leaf at Segundo, a mango biche (green mango) margarita at Cantina y Punto or a Life Aquatic with gin, feijoa, grapefruit and rosemary at Black Bear. When I am craving a great Manhattan or a whiskey de maleta (a bottle brought in someone’s luggage, in some cases mine, from a foreign country), I visit Pedro Escobar and José Sosa at Nueve and Ocho y Cuarto. One of the few Bogotá bars with a thorough grounding in classic cocktails, not to mention their mouth-watering tropical take on cacio y pepe that replaces the pasta with shaved hearts of palm. And they have an extensive wine collection. I don’t know how they fit it all in.

Dinner
For a tasty dinner with great cocktails and general merriment before the real rumpus starts, I head to Mesa Franca. Tom Hydzik makes great cocktail specials with viche, an unripe sugarcane distillate from Colombia’s Pacific coast, and chef Ivan Cadena’s creative use of local ingredients in his dishes make every dinner here memorable. Thursday nights they invite a local DJ to spin salsa and Colombian music. For fancy, it’s gotta be Leo, Bogotá’s most celebrated restaurant. The tasting menu is a deep dive into Colombian ingredients mixed with modern techniques but it’s the drink pairing that thrills me to the core. Laura Hernández-Espinosa, who directs the beverage program, has hunted down ferments of local fruits like corozo, vino de coca, guava wine, feijoa eau de vie, tomaseca and other traditional Colombian beverages. You have never tasted anything like this and it will make you wonder why everyone is still drinking the industrial “Colombian” rum and aguardiente that is imported from Panama and Ecuador.

Post-Dinner, Pre-Dawn
It’s not a night out in Bogotá if you don’t dance. Clubs like Boogaloop, Latino Power and Metropolitán feature local artists that blend classic styles of Afro-Colombian music with house and electronic influences. At Metropolitán, the dancing is better fueled with a bottle of viche curado, viche infused with medicinal herbs and spices. On the nights when nothing but New Order will do, I head to Asilo, where the $3 entrance fee gets you a beer and an eclectic night of new wave, disco, salsa, punk, and arty video clips projected on the wall. By now we’ll probably pay the exorbitant entrance fee at current electronic darling Video Club and we’ll dance until 6 am.