Where to Drink Beer in Vermont 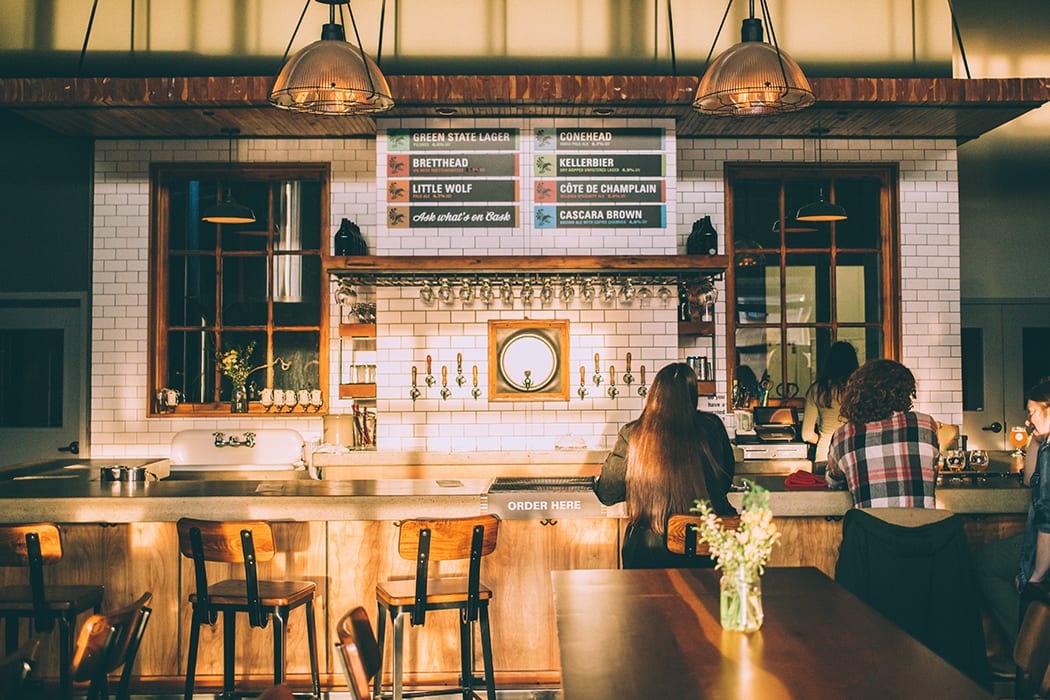 For many people, Vermont’s beer scene evokes visions of a single, golden-hued treasure: Heady Topper IPA from The Alchemist. Lines form early on release days for the coveted brew, which is widely regarded as one of the most delicious hoppy beers made in the States. But let’s be honest—Vermont’s got a lot more going on than one very good IPA.

In fact, there’s so much happening in the state’s beer scene that the Hotel Vermont in Burlington has a full-time beer concierge to help visitors make the most of their travels. Matt Canning moved back to his hometown after forays in the restaurant and hotel industries in Boulder and Northern California two years ago to launch the program. Every other Wednesday from May through October, he leads the The Hops and Malts of the Matter Brew Tour, a trip that takes hotel guests (only) on a trip around the neighboring towns, visiting breweries and brewpubs from Burlington and Greensboro to Waterbury and back.

The Vermont beer scene is anchored by what Canning calls “the big three” breweries—Alchemist, Hill Farmstead and Lawson’s Finest Liquids. And while part of his role as concierge is to showcase these breweries, he also works hard to shine a light on smaller operations as well. “The misconception is that the Vermont beer scene is one big hop bomb, and although hoppy beers are gaining a lot of attention (as they are all over the country) there is a full range of styles being brewed in Vermont,” he say, citing spots like Four Quarters, Foam Brewers and House of Fermentology as particularly worthy of attention. “What makes the beer scene unique is the rich history of brewing and artisanal culture in the state. The best beers are brewed on a limited scale with limited distribution, often not even leaving the Northern part of the state.”

Here’s a peek at one of Canning’s typical beer tours, including his favorite picks on where to go and what to drink while you’re there.

Hill Farmstead Brewery, Greensboro, VT
Canning calls Hill Farmstead “one of the best breweries in the world” as they brew the whole spectrum to perfection, from dry, crisp lagers to juicy double IPAs and mixed-fermentation farmhouse ales. “I am not aware of any brewery who executes with that range with such finesse and style,” he says.
Recommended beers: Go on Wednesday for specialty and vintage releases. You also can’t go wrong with the more readily available Mary, a crisp German Pilsener balanced perfectly for middle-of-the-day sipping. Double Citra is a DIPA brewed exclusively with Citra hops that tastes juicy and soft, and Arthur, a farmhouse saison, is what Canning calls “the best representation of Hill Farmstead’s farmhouse yeast.”

Juniper at the Hotel Vermont, Burlington, VT
The lobby restaurant and bar at Canning’s place of employment features twelve local beers on draft, including rotating lines from Hill Farmstead and microbrewery Lawson’s Finest Liquids, plus coveted cans of Heady Topper and Focal Banger from The Alchemist. Bonus: live music three days a week and a killer back patio with a warm fireplace and picturesque views of Lake Champlain make the experience an unforgettable one.
Recommended beers: “Everyone knows about Heady Topper, but Focal Banger is the single-hop IPA (Citra) forward offer from The Alchemist that is only available in select restaurants,” Canning says. “At 7% ABV it is more palatable and ‘sessionable’ than Heady.”

BlackBack Pub, Waterbury, VT
This cozy spot could be Canning’s favorite pub. “The subterranean hangout has the most sought-after beers on draft in Vermont. Hang out at the oval shaped bar in snow pants of swim trunks and enjoy fresh beer (they only serve from 1/6 barrel kegs) in the most authentic of Vermont atmospheres,” he says.
Recommended beers: Fiddlehead Brewery’s bold Double IPA known as Second Fiddle; Frost Beer Works highly-respected Lush, also a hefty Double IPA.

Lost Nation Brewing, Morrisville VT
A staple of the beer tour, this top-notch brewery specializes in Belgian-inspired brews that mostly come in under 6% ABV, and has a great outdoor biergarten for summer sipping. “Lost Nation makes one of the best American made Gose out there,” Canning says.
Recommended beers: The Wind, the Citra dry-hopped Gose fermented on grapefruit; Saison Lemoille, dry, tart and fruity beer made in the traditional Saison style.