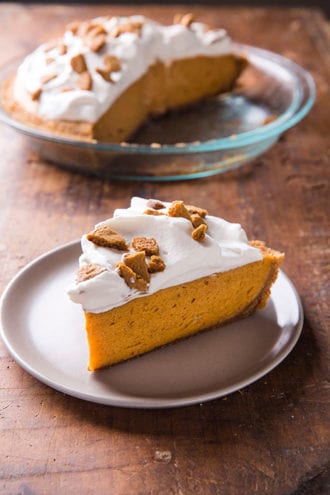 Looking to switch up your usual pumpkin pie this holiday season? Try this recipe from America’s Test Kitchen, which uses a chiffon pie base to create a lighter, mousse-like texture that comes together easily in the microwave and calls for a healthy glug of rum (it’s the holidays, after all).

For the crust: Adjust an oven rack to the middle position and heat oven to 325 degrees Fahrenheit. Process cracker pieces, sugar, and ginger in a food processor to fine, even crumbs, about 30 seconds. Sprinkle melted butter over crumbs and pulse to incorporate, about 8 pulses. Sprinkle the mixture into a 9-inch pie plate. Using the bottom of a dry measuring cup, press crumbs into an even layer on bottom and sides of pie plate. Bake until crust is fragrant and beginning to brown, 12 to 18 minutes, then remove from the oven and let crust cool completely on wire rack, about 30 minutes.

For the filling: Sprinkle gelatin over the rum in large bowl and let it sit until the gelatin softens, about 5 minutes. Microwave the mixture until it is bubbling around edges and gelatin dissolves, about 30 seconds. Let cool until slightly warm, about 110 degrees. (It will be syrupy.)

Meanwhile, microwave the pumpkin purée in a bowl until heated to 110 degrees, 30 seconds to 1 minute. Transfer the warm pumpkin to a food processor and add the brown sugar, cinnamon, and salt. Process until completely smooth, about 1 minute. Scrape down the sides of the bowl and process again until no streaks remain, 10 to 15 seconds. Transfer the pumpkin mixture to the bowl with the gelatin mixture, stir to combine. Stir in cream.

Using a stand mixer fitted with whisk attachment, whip the egg whites on medium-low speed until they are foamy, about 1 minute. Increase the speed to medium-high and whip whites to soft, billowy mounds, about 1 minute. Gradually add the granulated sugar and whip until glossy, stiff peaks form, 2 to 3 minutes. Whisk one-third of the meringue into pumpkin mixture until smooth. Using a rubber spatula, fold the remaining meringue into the pumpkin mixture until only few white streaks remain.

Spoon the filling into the center of crust. Gently spread filling to edges of crust, leaving a mounded dome in the center. Refrigerate pie for at least 4 hours or up to 24 hours. When ready to serve, spread whipped cream evenly over the pie, following domed contours. Sprinkle gingersnaps over top. Serve.