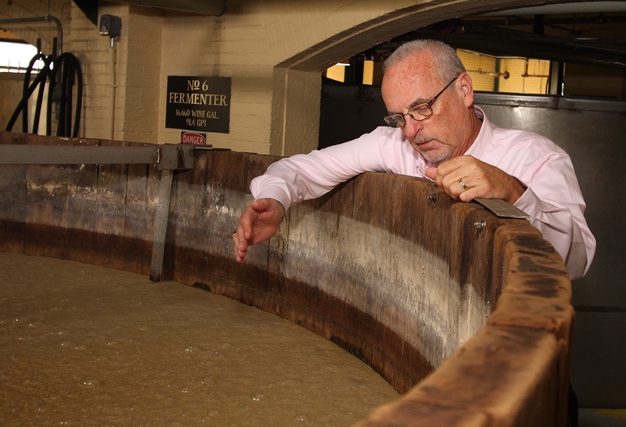 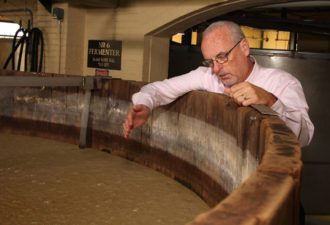 Jim Rutledge is about as southern as southern gets. Born and raised in Kentucky, and the master distiller for Four Roses—where he’s worked for more than 40 years—bourbon practically runs through his veins, and he knows just about everything there is to know about the classic southern spirit. Here the bourbon Hall of Fame-r chats with us about whether it was love at first sip, how he takes his whiskey and what southern food he’d be lost without.

Imbibe: Do you remember your first sip of bourbon? Was it love at first taste, or something you later developed an affinity for?
Jim Rutledge: It may be because of selective memory, but I don’t recall my first sip of bourbon. I’m sure I was a “few days” under the legal drinking age, and I suspect it was not a good experience. I think I first started developing an appreciation for bourbon when I began my career in Seagram’s R&D and especially a few years later as a distillery shift supervisor.

Imbibe: You’ve worked with Four Roses for more than four decades—what’s been one of your most memorable experiences there?
Rutledge: This is truly a difficult question. Even after nearly 45 years, I have memorable experiences with the people, and new friends, I have an opportunity to meet and talk with at every bourbon dinner, tasting event, etc. The darkest time in my career was when Seagram departed the world of alcohol beverages at the end of 2001, but ironically, very soon after was my most memorable experience when I first asked representatives of our new owner, Kirin Brewery Company, if they would be willing to return Four Roses Bourbon home to the U.S., and the immediate response was “yes.” We’re now in 44 states and experiencing significant growth.

Imbibe: You wear a lot of hats at Four Roses—is there ever a moment when you think, “This is why I love what I do!”
Rutledge: I’ve enjoyed my entire career, but being part of a team that is putting Four Roses back on the map in the U.S. has made these last few years exceptionally special, and no matter which hat I’m wearing, I love what I do.

Imbibe: How do you take your bourbon?
Rutledge: When I was first asked how I mix Four Roses bourbon in a cocktail, my immediate response was, “It does improve the taste of ice.” When I’m working an event, I generally drink bourbon on the rocks. I can stretch one drink much longer that way when I’m working a long evening event. As an after-dinner drink, or if I’m relaxing at home, I prefer having my bourbon neat.

Imbibe: If you had to guess, how much bourbon do you drink in a week/month/year?
Rutledge: I’m a lightweight when it comes to alcohol consumption. I enjoy nosing the aromas and sipping bourbon. I have a drink or two at many events and maybe a drink every week or two at home. Over the course of a year, I probably average three or five drinks per week. When I evaluate bourbon at work I use my sense of smell more than taste, and I generally spit when tasting to minimize consumption.

Imbibe: And when you’re not drinking bourbon, what’s in your glass?
Rutledge: Diet Coke.

Imbibe: Bourbon is synonymous with the South, and as a born and raised southerner, are there other flavors of the region that you couldn’t live without?
Rutledge: That’s an easy one—fried chicken!

Imbibe: Right now bourbon can be made anywhere in the United States. Do you think name-protection regulations should be put in place stating that true bourbon can only be produced in Kentucky?
Rutledge: 95 percent of bourbon produced is homegrown in Kentucky, but bourbon has been declared America’s only native beverage alcohol, and I believe the small boutique distilleries that are springing up and producing bourbon across the U.S. are good for the business. However, there are initiatives being taken by some people to declare—as bourbon—any type of whiskey made in the U.S. I am absolutely and totally against anything and everything to do with changing the integrity and credibility of bourbon as a unique category within the various whiskies of the world. Bourbon has a long-standing and colorful history, and specific rules and regulations govern what it takes to be classified a “straight bourbon whiskey,” and the requirements to be classified as bourbon should never be lessened. In recent years people around the world have begun to realize there is indeed another whisk(e)y (other than scotch)—and it is Kentucky/American bourbon—and our industry is in the midst of dramatic recognition and growth, domestically and globally. Unfortunately, some distillers of other type whiskies would like to capitalize on the name “bourbon,” which, if successful, would ultimately destroy the integrity and credibility of the bourbon whiskey category. I’m very proud to be part of the bourbon industry, and I’m proud to be a purist and traditionalist when it comes to upholding and maintaining the existing requirements to be classified a bourbon whiskey.