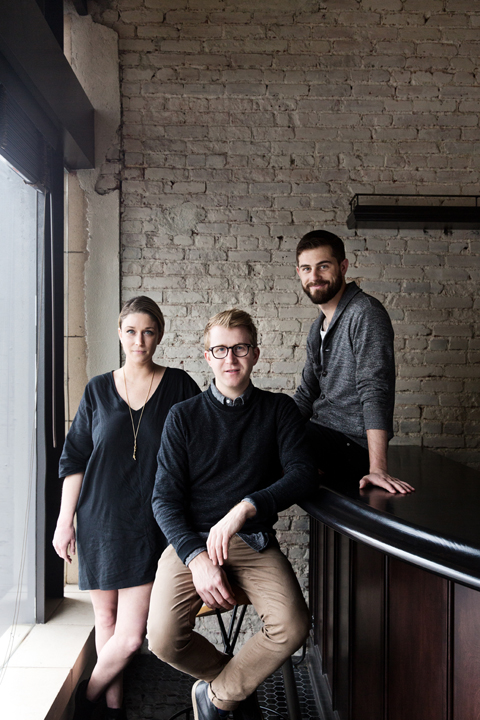 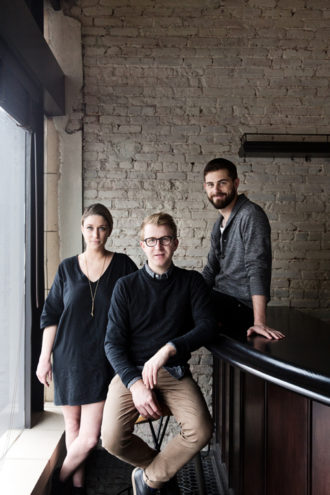 David Kaplan and Alexander Day have opened some of the most iconic bars of the moment, from Death + Co in NYC to Honeycut in LA. We chatted with them about opening bars in the two very different cities, and how they’ve managed to work their bar magic time and again.

Imbibe: You’ve opened bars in New York and LA. What do you do differently in each city?
Dave Kaplan: In New York, people live in tiny spaces, so they live their social lives in bars. You don’t meet your friends at each other’s places—bars become your living rooms. On the other hand, in LA people live in larger spaces and they like to be home, and to have friends over. To open a bar there, the challenge is getting people out of the house. Give them a reason to leave the comfort of their home and go out—people are looking for something they can’t get at home, and often for some kind of entertainment element.

Imbibe: Did you feel like there was a big learning curve there?
DK: Oh, yeah. We took three years to open Honeycut, and I still feel like we didn’t give it ourselves enough time to learn the city. I think we underestimated the differences. First we thought we wanted to open in Culver City, and then we looked at place around Hollywood and the West Side. But we finally settled on downtown because we really liked what was going on in that neighborhood, and the space was so perfect.

Imbibe: Tell us about the new spot you’ve opened in LA. What was your vision?
DK: It’s two bars actually, which we hope is part of the appeal. The Normandie Club is 75-80 seats, and the Walker Inn is a 26-seat, very intimate environment. We’ll take reservations and they’ll be completely different bars—different service styles, different staff will work in each bar. That was a way for us to create a certain level of programming, and interest and a dynamic sort of spot, while being able to focus our attention on cocktails and service. Honeycut is obviously a focus on cocktails and service, but first and foremost, it’s about a great party. It’s about being an incredible party, without letting any of the other elements of hospitality fall by the wayside. You should walk away from a night at Honeycut being like “first, it was an amazing night, and amazing party. Also, the drinks were great.” At Normandie Club and Walker Inn, we have two different ways to exercise what a cocktail bar is. We have Normdandie Club, which is really a cocktail bar for the neighborhood. It’s not a “neighborhood bar,” but it is a cocktail bar for the neighborhood—it’s first come first served, plenty of standing area. It’s meant to somewhat emulate a New York bar in that it is that common ground, that meeting place. We have almost completely floor-to-ceiling windows, we have wood blinds, but it lets a lot of light in. It makes you feel like you’re part of the neighborhood. We wanted to celebrate that—almost like bringing a little piece of New York with us. At Walker Inn, we’re saying, How do we think of cocktails in terms of programming? How do we change what this place is? How do we consistently, continuously exercise that creativity within cocktails and give people a reason to come back once a week, or once every two weeks, because they know that things are going to change?
Alex Day: The neighborhood you’re in is so important and so valuable in Los Angeles. In looking at Koreatown, we discovered that the identity of this neighborhood, the amount of people living here and also the amount of people moving here, led us to a conclusion that the type of bar that we would build in New York would be quite appropriate here. There’s a need for people to find a place to socialize. That’s an important part of it. To create the kind of beverage program from start to finish that includes a heavy emphasis on hospitality, that we would expect anywhere. Like Dave said, Honeycut is a party, and we wanted to explore the other side of our bars—to embrace another type of experience that we love so much.

Imbibe: Would you ever have opened Honeycut in New York, or was it obvious that LA was the right place for it?
DK: In the beginning, it was a New York-based idea. It was two years before we moved to LA, and when we first moved, we had a very clear, fully thought out concept of what we wanted to do here. It was actually for the most part a complement to Death + Co. It was sort of “Death + Co. Los Angeles.” We were very married to it. One of the reasons it took us so long to do anything here is that we were so stuck with that idea. We were looking for four walls and a location that complemented that idea instead of being receptive to great spaces. And so when we found the opportunity for the space where Honeycut is, we said “Alright, there’s this great opportunity—what would we want to do here? We need to rethink how we are approaching LA.” And that’s when we had the idea—what do we think about doing Honeycut here? Nitecap [in NYC] was different. We had the opportunity for the space and we built out the idea around the space. With Normandie and Walker Inn, we didn’t have a pre-built concept. We met with Eric Needlemen and Cedd Moses—our partners here as well as on 151 and Honeycut—and they said, “We have this opportunity, do you guys have anything in mind for it?” And we said, “Yeah, we do, but give us a week to think.”

Imbibe: Tell us about the hotel element of the new spot.
DK: They hotel component is associated with the Walker Inn. Directly above it are 10 hotel rooms, which are attached to it, so they will have a similar environment. We are working to have that phase of the project open in roughly a month, depending on how comfortable we are with Normandie Club and it being up and running. So those rooms are really in some ways associated with the larger hotel that we are in, but they’re in some ways separate—it’s a whole wing of its own. We’re exploring different ways to do great beverage service inside those rooms to draw the feel of the rooms down into the bar, and vice versa. All of those elements are yet to be defined in specific ways just yet. We’ve been hugely inspired by what Jeffrey Morgenthaler has done [in Portland] at the Ace Hotel and with Clyde Common, and elsewhere throughout the world—London has a lot of great examples too. The Ace in LA, too. We’re looking to do something unique, and not steal from those guys too much.

Imbibe: Based on your experiences in LA thus far, what would you say defines the city’s drinking culture? Has in changed since you’ve been there?
DK: Most places in LA are free-standing, not residential, which I think is unique to LA. Many major metropolitan cities have a much higher percentage of density then LA’s scene. That means that almost every establishment in LA is a destination. Everyone has to drive—or get there somehow. Uber has actually helped change the way that LA drinks. It has been amazing. The dirty little secret of LA is that everybody would drink and drive. It was bad and scary. A year and a half ago, people from New York would ask me “How do people get around? How do they go out?” and I’d say, “Everyone drinks and then drives. Which means a few things—people are usually fairly measured, so they don’t drink as much. They go out for shorter periods of time. They’re still obviously breaking the law, and there’s a very scary level of safety in that. Now, almost everyone I know takes Uber or Lyft. Everyone takes a car service to get around—it’s cheap, it’s easy, it’s safe, it’s fast. That has really changed the way LA drinks. It’s still not the convenience level of New York, but it’s changing rapidly.

Imbibe: Anything else on the horizon for you guys?
DK: No more bars. We’re pretty full up. We’re looking forward to NOT opening any more bars in 2015 after Normandie and Walker and focusing on everything we have and continuing to celebrate those places and make them better. Hopefully travel a little bit less.
AD: One final note on The Normadie Club and Walker Inn is that we’re in an incredibly privileged position with our staff. We have what we believe are some of the best bartenders and hospitality professionals in LA as well as having been able to recruit some people from out of town. The people behind the bar are going to be making some waves.