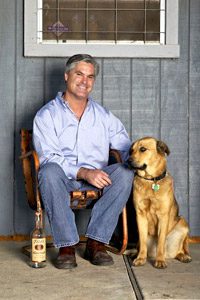 Yes, his name is Tito Beveridge. Destiny? Coincidence? Either way, the founder of Tito’s Vodka has fittingly made a name for himself in the spirits biz with one of the most successful vodka distillers in the country. Beveridge opened Texas’ first licensed distillery and launched his eponymous vodka in 1997, setting new industry standards for those in the Lone Star State and beyond. Here, Beveridge chats about accidentally igniting his arm hairs, why his wife won’t let him drink vodka Martinis and why he decided to pot distill vodka in the first place.

Imbibe: Was there a specific moment when you decided to start a career in distilling?
Tito Beveridge: Oh, definitely! I had worked in the oil, gas and mortgage industries around the same time I’d been infusing vodkas for my friends as Christmas presents. When rates went up, it killed my business and left me at a point of wondering what to do next. I saw this guy on television who said that if you’re trying to figure out what to do in life you need to take a sheet of paper, draw a line down the middle, and on one side list things you like to do and on the other side list what you’re good at. And then you basically build a job where you’re able to incorporate as many things from those lists as possible. I realized I’d been working all these other jobs so I could basically go out and eat and drink well. I was trying to make money so that I could enjoy the hospitality industry. So I thought it’d be genius if I got in the hospitality industry. After looking at my sheet I said, “I’m going to get into the liquor business.”

Being the first distillery to open in Texas, was there anyone you could go to for advice?
It was all trial and error! Mind you, I was starting off before the Internet was around. I tried the library, but it was almost like they’d had a massive book burning during Prohibition. I couldn’t find anything.

Any distilling disaster stories from those early days?
When I first got into distilling I’d put some high-proof spirit on top of an empty 55-gallon drum to see how it burned, figuring it would light just like gasoline. I struck a match and threw it at it, but the match went out. So I went to strike another match and all of a sudden I realized my eyebrows and arm hairs were on fire—it was burning so hot it didn’t even make a flame. So now in the still room we have huge shower heads connected to the water main, so if anything happened, you’d be deluged with water. I’ve tried to mentally train myself that if I ever caught on fire, I would just turn that thing on and put myself out. Then I’d leave it on, run out the door and hope for the best. But thankfully that hasn’t happened.

Was there a moment when you realized that Tito’s was becoming a success?
We’re coming up on our 18th year, and a lot of people think we’ve found overnight success, but in reality it has been 18 years of steady pounding your head against the wall. Running a company is this multifaceted thing where you always feel understaffed, underfinanced and that the odds are against you. But I really enjoy the industry—it fits my personality, and I’ve always looked at it as a labor of love.

Why did you choose to focus on vodka?
I’d always liked drinking vodka. I used to drink a lot of whiskey and tequila, but vodka was always my first choice.

What do you think differentiates Tito’s from other vodkas?
I basically make the vodka I like to drink. Since I was the guy making it, bottling it and selling it, I realized I couldn’t make something for somebody else. It was just fortunate for me that my palate falls into the bell curve of what vodka drinkers like. I’m a South Texas, Hill Country boy—I don’t understand the luxury goods market, so I won’t enter it. I ask why people would spend six more bucks for a glass bottle, when it’s the juice inside that counts. It may help with the first sale, but it’s what is inside that they’re going to come back for. I never went to business school, so I never really understood what it is you’re supposed to do—I just did what I thought was right.

Tell us about the pot distillation and corn base—two things pretty unique when it comes to vodka production.
When I decided to get into the spirits business, there were tons of other vodkas on the market, so I had to think about what I could do to differentiate myself. I started researching and learned that most vodka is made in column stills. At the time, single malts, Cognacs and a few tequilas made in pot stills, but no vodka, so I built a pot still from scratch and started brewing little six and a half gallon carboys of experimental batches with different grains and sugars. Ultimately, I preferred corn.

How do you like to drink your vodka?
I either drink it with water or with seltzer and a slice of lime and orange. Sometimes I’ll switch around and pour some in iced tea, lemonade or an Italian soda—basically I like it with something that also hydrates. My wife says she doesn’t like me drinking vodka Martinis because after a few I start dropping f-bombs around the kids.

With new Texas distilleries popping up and growing craft beer and wine industries, what do you think draws people to Texas to craft these beverages right now?
Back when I was raising money, people kept telling me I couldn’t do it in Texas. But I think other now see my success and think, “If that knucklehead can do it, anyone can.” I also think we just got everything off to a good start with high marks from the get-go. I’d seen what happened in the Texas wine industry and how the first products that came out kind of gave the whole industry a black eye. Now they’re making really good products, but I think it’s been hard to overcome the initial stigma. When new people call me up and talk about wanting to start a distillery I tell them they only have one shot to make it so good that the customers say it’s better than anything else already out there.

What do you love most about the work you do?
I’d say that number one is walking around the distillery with a couple of test tubes in my back pocket making sure all the batches are coming along—it’s my first love. I’m Scottish, Irish, German, Welsh and Polish, so walking around tasting booze in a distillery for a living must be in my heritage somehow. And then there’s the social side of the business—I’m a people person so there’s something to be said for having cocktails, meeting people and buying them drinks.

So if you weren’t distilling, what would you be doing?
There’s really nothing else I’d rather do. I think this business has kind of ruined me and made me believe that the guy I saw on TV was right—if you find something that you love to do and that you’re good at, you’ll probably work harder at it than everybody else because it never actually feels like you’re working.