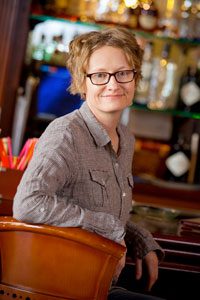 Juniper has gin. Barley makes beer. Behind every bottle of booze you’ll find a bevy of botanicals, and fusing the drinks world and plant kingdom into one is botanist, cocktail enthusiast and author Amy Stewart. In her latest release The Drunken Botanist (featured in our January/February 2013 issue) Stewart explores the mysterious and intertwining plant-drink connection through flavorful history lessons, anecdotes and recipes. Here, she chats with us about the crossover between the cocktail and plant communities, why we drink plants in the first place, and the best botanicals for growing your own cocktail garden.

Imbibe: What made you want to combine cocktail culture and the plant world into one book?
Amy Stewart: I’ve been a botanical writer for a long time, but I’ve always been a big cocktail enthusiast as well. When I was working on Wicked Plants, I had a chapter called “The Devil’s Bartender,” which covered how poisonous plants had been used in alcohol over the centuries, and that got me thinking about all the interesting plants that have ended up behind the bar. So I started making a list and it really took off from there.

Any long-forgotten botanicals that you came across that were popular way back when but fell out of favor over time?
Just about anything that comes out of the ground has been put into alcohol at one time or another, and a surprising number of medieval ingredients—like artemesia and wormwood—are still in use today. But one ingredient you don’t see much of anymore is maidenhair fern. Jerry Thomas’ original Regent’s Punch called for a capillaire syrup, which was originally made with maidenhair fern, and people trying to reconstruct vintage cocktails might be interested in re-creating maidenhair fern syrup. It’s actually a houseplant, so it’s pretty easy to get a hold of, but having also written a book about poisonous plants, I often warn people to be careful with certain ingredients! Maidenhair ferns are very good at cleaning up contaminated soil and will actually pull arsenic out of the ground. That doesn’t make them dangerous plants, but it does mean that if it’s just growing on a vacant lot somewhere, you may not want to pick it.

Any plants you came across that don’t exactly taste great on their own, but transform once in the glass?
Yes! So many of the herbs we use in alcohol are either just barely edible on their own or not a lot of fun to eat. Like sweet woodruff—it’s this sweet little nothing plant that looks like a groundcover and has a light vanilla fragrance. It’s not something people would eat, but in Germany they make May wine from woodruff harvested in early spring.

So how do you think people first decided that poor-tasting plants would fare better in alcohol?
I think there were two things going on. One was that a lot of these botanicals were used for medicinal purposes. But plants don’t keep very well, and dried herbs can lose a lot of their essential oils and oxidize. So if you were an apothecary or early physician, soaking plants in alcohol was an easy way to preserve them. But then some of it was also about hiding the taste of really bad booze. We sort of have this nostalgia for the old days in the cocktail world, but we’ve never had it better than we do right now.

You’ve said every great drink starts with a plant. What will we find in your garden and glass?
For the past few years I’ve been working on a cocktail garden that exclusively grows ingredients that can be used in drinks. Some of those things are pretty obvious—like mint—but even with the mint there’s a special cocktail twist. There’s this variety of spearmint called “mojito mint” that is grown in Cuba—and as you know we can’t just export things out of Cuba anytime we want—but Canadian tourists coming back from Havana have been known to pull a sprig of mint out of there glass and bring it back with them. It’s now made its way to the nursery trade and anyone can get hold of it. And then I have all the sort of herbs and edible flowers, peppers and tomatoes, and ingredients for things that I really like to try and make. Sloe gin, for instance, I love, and so I’m growing sloes, and I’ve got blackcurrants for cassis—basically very cocktail-specific plants that are really fun to grow and don’t need a lot of space.

What sort of plants are more forgiving when it comes to planting a cocktail garden?
It’s really about what works in your climate and with the space you have. I recently came across these miniature berry bushes that are designed to grow in containers, which is great for making single drinks. But if I was in Southern California or Miami or New Orleans I’d be growing sugarcane—there are tons of heirloom varieties that aren’t grown by the sugar industry, but that tropical gardeners know about. Even just having it as a garnish in a Mojito I think would be so cool.

So what are some of your favorite flavor combinations?
I like savory drinks as well as ones that play up more vegetal and spicy flavors. So in the summer I love cilantro, tomatoes, pepper and celery, which are great not just with vodka or gin, but also play well with tequila. I also love fruit in drinks, which is a great way to use up a surplus crop. In summer peaches and bourbon are a favorite combination, and my strawberries, blueberries and raspberries usually end up in any sort of drink that calls for rum.

Any other tips for those hoping to become their own Drunken Botanist?
Obviously grow things that you actually like to drink, but at the same time, be open to surprises. One of the biggest surprises for me was when somebody gave me some red venture celery to plant. I’d never thought I’d wanted to grow celery, but it turns out to be fantastic to always have it on-hand in the garden, and especially one that’s such a unique variety. So I think it’s about finding things that are uniquely suited to cocktails, but cocktails that you want to drink!