Chris McMillian on How to Make a Mint Julep 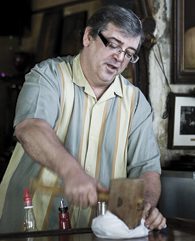 Chris McMillian is a bartending institution—a walking, talking library of cocktail lore and history. A veteran of many of New Orleans’s finest and most historic bars, he’s also a constant presence at the Museum of the American Cocktail, which he helped to found.  Here are his thoughts on everything from the virtues of hand-cracked ice to the love lives of ancient Greek gods to why it’s perfectly fine to drink a Julep in the morning.

Imbibe: What first attracted you to the Mint Julep?
Chris McMillian: Well, you know, I collect literature about drinks and drinking. I think we [bartenders] all do; at some level, it kind of goes with the territory. And of all the drinks you encounter, none evokes the kind of written or oral response that the Julep does, with the possible exception of [Bernard] DeVoto and the Martini.

Imbibe: Speaking of which, there is that wonderful piece by J. Soule Smith that you so often recite when making a Mint Julep. How long did it take you to memorize that?
CM: I don’t know. There was a time when I read the text directly from paper, and over time it kind of sunk in. I still forget lines to this day. To me, it just—well, we all know the dark side of drinking, and for me, this expressed everything beautiful about drinking.

Imbibe: What are some of the classic mistakes you’ve seen people make when creating Mint Juleps?
CM: Well, I wouldn’t phrase it exactly that way. I think it’s more a general approach to making drinks. It’s not so much any main thing as it is all the cumulative things you do that add up to a good drink, [like] the proper service vessel. Metal acts a conductor; glass acts as an insulator. So since cooling a drink is heat transfer, you radiate the heat away from the drink more quickly and efficiently through a metal container—hence, the metal [Julep] cup. Crushed ice: The more surface area you have, the more quickly and efficiently you will cool—typically, with a greater level of dilution, but because of the almost magical combination of the cup and the ice, the ice really maintains its coldness over a long period of time in the cup without too much dilution. And the dilution’s not really going to hurt that bourbon, either. I think the handling of the mint itself is a huge area. We see it especially with the Mojito—the bourbon’s a little more forgiving, because of its robust nature—but with rum, you really see the delicate nature of mint. I think many bartenders think they’re demonstrating their skill by showing off their muddling technique, but you’re really just supposed to delicately release the oil of the mint, and if you over-extract it, you start to release chlorophyll or vegetal matter within the leaf, which is bitter.

Imbibe: What’s the best way to get perfect crushed ice?
CM: I hand-crush my ice. I have a Lewis bag and a large mallet. While I have access to a crushed-ice machine at work, if I had to leave the bar every time I needed to go get crushed ice, it would be a disruption to service, and if I kept crushed ice in the well, it would slush up and become wet. And the coldness and dryness of the ice at the inception of the drink is really one of the key elements of its success. Like people say with everything else, “fresh is better.” From the moment you crush it and take it out of its cold environment, ice is going to start to dilute and melt down. I don’t know if you’d call it cracked or crushed. I’d call it crushed. I pound the shit out of it with that mallet.

Imbibe: So walk us through making a proper Julep.
CM: I take my silver Julep cup, I add a small amount of simple syrup, less than a quarter of an ounce, into the bottom of the cup. I then add the mint—five, six sprigs. I don’t think you can use too much mint. I think the main danger, like I said, is the over-extraction of the mint, and the more mint you use, the less extraction it requires. So I put it in the bottom of the cup. I then gently muddle the mint against the interior of the cup, trying to cover all of the interior surface. The small amount of syrup I placed in there almost acts as an adhesive, so that as I muddle, the oil that’s being expressed combines with the sugar, which is then adhering to the interior of the glass, creating a mint-oil-and-sugar rinse, if you will. I then crush the ice and put it in the glass. Have a nice cap on it, extending maybe 10 to 20 percent above the top of the glass, even more, like a snowball or a snow cone. Because the minute you put that room-temperature alcohol on there, the ice is going to diminish in volume dramatically and rapidly.

At that point I pour my bourbon in until I get to about 1/8 of an inch to 1/4 of an inch from the top—it depends on the size of the cup, but about three to four ounces—and then I top it with simple syrup. I like to put the sugar on afterward, à la Soule Smith, so you don’t have to get to the bottom of the drink in order to get to the reward. That is, to me, one of the most compelling qualities of the Julep: Every sip is different from the first, because it’s a built drink as opposed to a homogenized drink. I don’t typically stir my Julep up. That means that as the sugar sinks to the bottom, it’s going to be much more intense in bourbon at the top, and much sweeter and more minty at the bottom. Each sip progressively takes you there and each sip is different from the one preceding it. Few drinks have that multidimensionality, building to the crescendo—which I think is the payoff of the Julep—of the bourbon and the mint together.

And then I take a large bunch of mint, slap it to release the oils and enliven the senses through the fragrance, and garnish the drink. I then take a small straw and place it right in the mint itself so that when you reach down to take a sip, you really have to nuzzle your nose in the garnish so you get that additional olfactory stimulation. You know, the more senses you involve in an experience, the more intense an experience it’s going to be. And then, traditionally, you would wrap the cup in an Irish linen napkin, so as to keep your hand warm and your cup cool.

Imbibe: How much simple syrup do you use?
CM: I kind of judge that by the individual. If I’ve served them other drinks and I see they like a little more sweetener, I might add more. If it’s somebody who’s a whiskey lover, I might use a little bit less. One of the complaints about Juleps from many people is that they’re often oversweetened. We can probably say three-quarters of an ounce or an ounce total. You’re looking for a little more sweetness as opposed to less, but the bourbon itself is a naturally sweet spirit. I guess it’s intuitive, at some level. You know, I’m a regular measurer in cocktails. I’m a great believer that if you want a drink to taste the same every time, you have to make it the same every time. And yet the Julep is one of the drinks that I do not measure, because of the nature of the quantity of whiskey and the intensity of flavor; you really have to tailor that to the tastes of the individual you’re serving. But if I were writing Chris McMillian’s recipe, I would say somewhere around an ounce. From time to time, I will vary the simple syrup I use. One of my favorite variations is peach syrup. Bourbon and peaches are a naturally complementary pairing—that’s the basis for Southern Comfort. It adds just another subtle flavor dimension on a classic combination. And in fact, peach brandy was one of the most common base materials for the Julep during the 19th century.

Imbibe: Do you have a favorite Julep story?
CM: Mint herself was a Greek goddess, a minor river goddess, in fact. And Pluto, the god of the Underworld, was much enamored of her—not to the pleasure of his wife, who in punishment unjustly turned the innocent maiden into, essentially, grass, so she would be eternally trampled under the feet of everyone. While Pluto could not prevent this, he made it so that the more you trampled her, the sweeter she smelled. And today there’s a mountain in Greece named in her honor: Minthe. I think it’s part of this mythological connection—the Julep itself dates to Persia. Here we have Greek mythology and ancient Babylon intersecting with the New World. You know, you could do the Julep Monologues, based on the quantity and quality of written material that this drink has inspired since its introduction.

Imbibe: The sad thing about this conversation is that now we want to make a Mint Julep, but it’s 8:30 in the morning.
CM: Well, you know, that was their origin—the earliest references were in Virginia, where servants would bring them on silver salvers while you were still in bed. You would consume two to three Juleps before arising, to fortify you against the malaise that was supposed to occupy the ether and make people sick. So if you’re in the mood, you can go ahead and indulge yourself and feel perfectly okay about it!