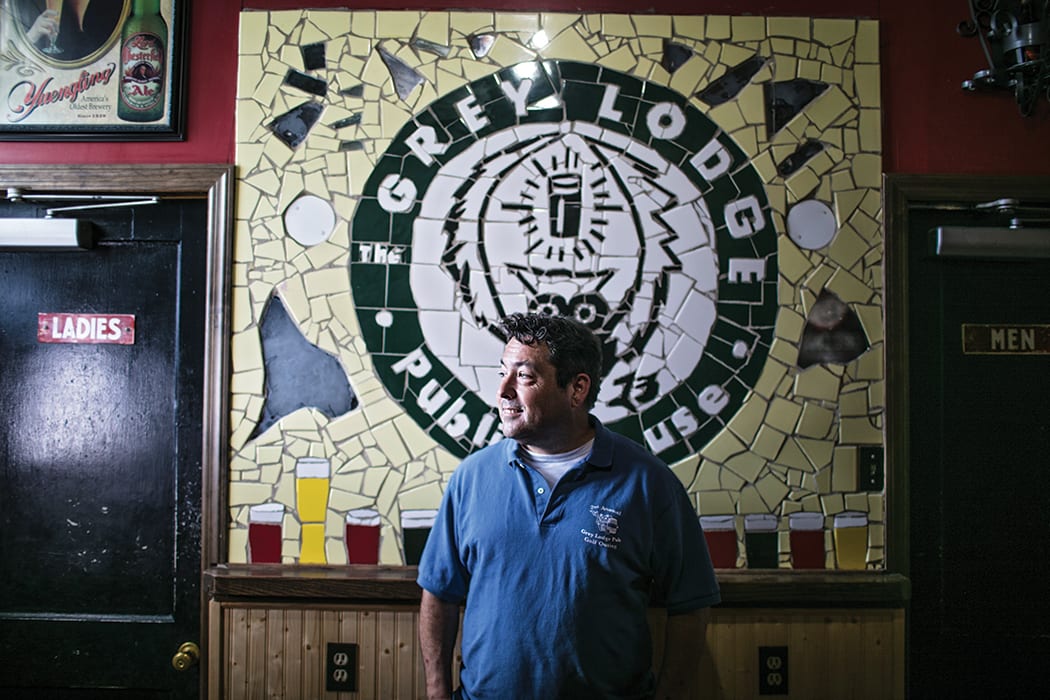 Bellefonte is a small town in the hills near the center of Pennsylvania. There was a German place there, Schnitzel’s Tavern, in the old Bush Hotel, one of the first places in the area to be wired for lights. I would go 30 miles out of my way to get a Köstritzer and a plate of their smoked trout, and I recall nights when a dozen of us would lift mugs out on the stone patio on the brink of Spring Creek, laughing and calling for more beer. The Bush Hotel burned to ashes 11 years ago; apparently some of that wiring was never updated. Friends in the area called with the news as it happened; they knew. That was a bad day.

I went to grad school in Pittsburgh, and my buddy Jay Harper took me to Chiodo’s in Homestead. The ceiling was festooned with hard hats from the mills, brassieres, a baby stroller, belts of machine-gun ammo, Steelers helmets … and in 1984, you could get a 750 of Chimay Red at the bar. I think it was $5. I went back a lot; ate the Mystery Sandwich; met old Joe Chiodo, who’d run the place since 1947; and helped cajole the Mendelssohn Society into singing the Hallelujah Chorus one night when they’d stopped in for a post-rehearsal beer. But Joe retired in 2005—he would die only two years later—and the bar was razed. There’s a Walgreens there now.

I had my first non-mainstream beer—an Altenmünster pils; I still have the bottle—in 1981, at the Lauzus Hotel in Lancaster. Old Wilhelm Lauzus ran the place in the taproom of the former Rieker Star Brewery, and there was still some faded glory: mosaic floor, pressed-tin ceiling, heavily carved backbar. I took girlfriends there (including the one I later married), we recited poetry there, we drank there after weddings, and after funerals. Then Wilhelm died in February of 1985. I went to his funeral; the minister spoke of the green shoots of barley that would sprout in the spring. The bar was never the same, and it eventually closed.

I toured The Lion brewery in Wilkes-Barre with a few friends back in 1993; there was no “tour” at the time, but they took us through, and then suggested we walk down the street to Dukey’s Cafe and have some fresh drafts. It was untouched, a relic. Old tap knobs, 7-ounce glasses, cracked leather barstools and a patina of old nicotine on the ceiling. We stayed for hours, and dropped by whenever we were in the area. Around 2003, Dukey’s was bought, and cleaned, and gussied up with fergodssake lace curtains on the windows. “Jesus,” my friend Les said, “they should rename it ‘Daisy’s.’ ” We never went back.

But some bastions remain. In 1996, I got an email from a guy who called himself Scoats. I should come see his bar, the only beer bar in Northeast Philly. After two more emails, I went to the Grey Lodge. Scoats was an eccentric guy, and the bar would reflect that: tile murals in the bathrooms, a memorial wall of regulars who have died (I’ve been to two of their funerals), and events like Friday the Firkenteenth, a cask-ale blowout that happens every Friday the 13th. I took a priest friend of mine there once, and in between pints of IPA, he did blessings of the throat, and people solemnly lined up for it. Don’t worry. I was just at the Grey Lodge last week, and Scoats is healthy. It’s good to still have a favorite place to go.

Lew Bryson
Lew Bryson has been writing about beer and spirits full-time since 1995. He’s a senior drinks columnist for The Daily Beast and the author of Tasting Whiskey, a broad survey of the world’s whiskies.