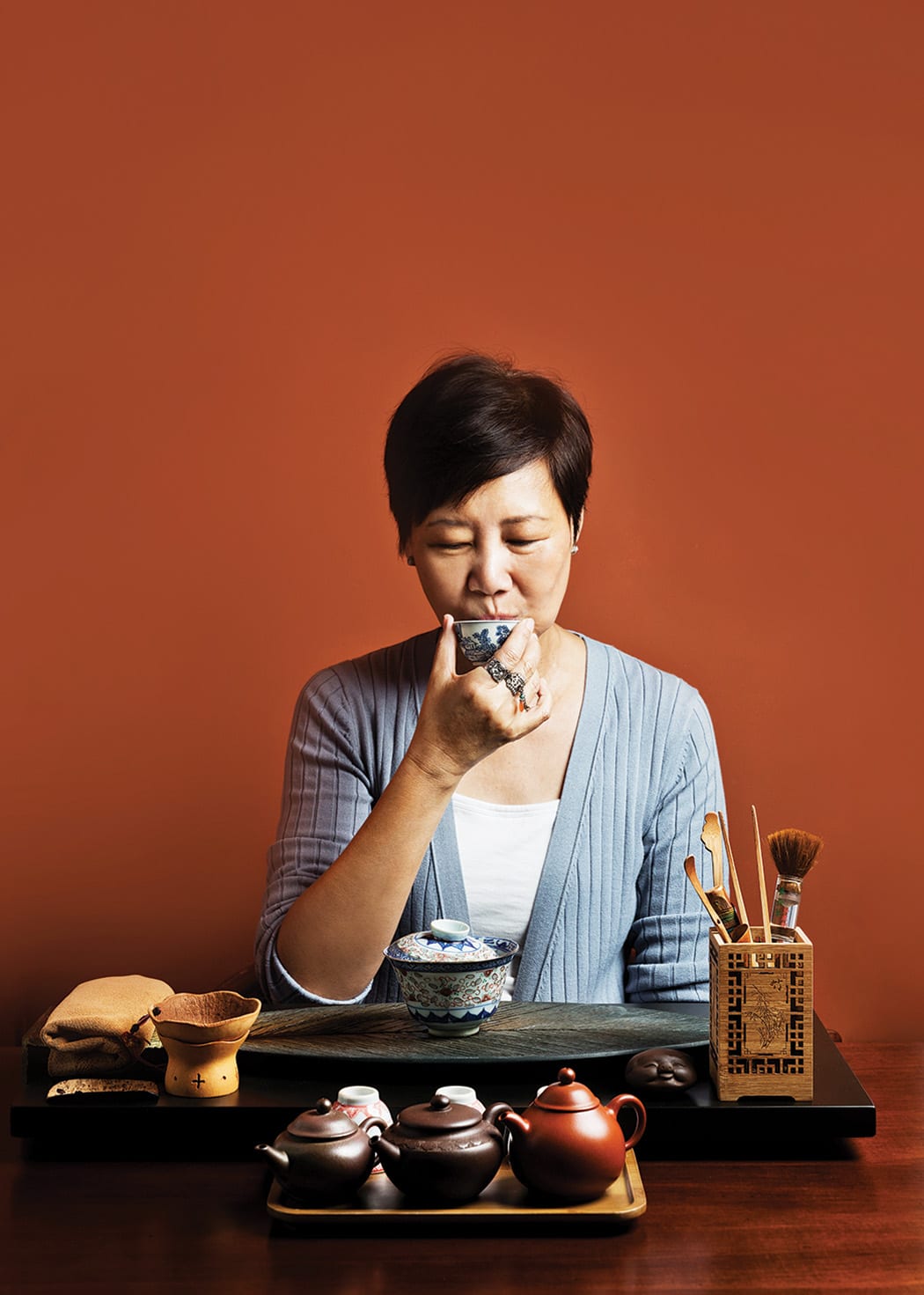 There’s a new tea from Linda you need to try,” a friend texted me in 2016. “Unusual sweetness and very good for the price. I’m buying 10.” The linked tea, sold on Linda Louie’s online store, Bana Tea Company, was a pretty little thing with flowers on the package, and called Enchanting Beauty. As is common with pu-erh—a sun-dried greenish type of tea produced exclusively in China’s southwestern Yunnan Province—the leaves were compressed into a dense cake and decorated with an artistic wrapper. The product copy promised notes of bamboo and ginger flowers. The 3.5-ounce disc, more a cookie than a cake, cost $27. A good price indeed by Bana standards, where celebrated vintages of pu-erh regularly go for hundreds or thousands of dollars a pound. Practically an impulse buy.

Chinese teas are often given baroque names like Enchanting Beauty; see also Iron Goddess of Mercy and Longevity Eyebrow. But this one could win any pu-erh beauty pageant. The leaves steeped to a luminous gold. My first cup gave me the distinct impression of pastry cream shlooping out of an eclair, and each sip had a weighty opulence like Sauternes. Repeated brews of those leaves drew out eggier qualities: first a crème brûlée, later an egg custard tart. The Enchanting Beauty was a dessert tasting menu packed into a tea cake.

This is the thing about Linda Louie’s teas—there’s always more going on than you think. You wouldn’t guess it from browsing her website, resplendent in Web 1.0 design, or her spare social media pages. Bana teas aren’t poured in high-flying restaurants and cafés that tout specialty tea programs, and the site rarely makes online best-of lists. Louie does little marketing; her business is mostly word of mouth. But in the tiny world of American tea enthusiasts, who congregate on blogs, Reddit forums and private Slack channels, Bana is considered one of the most impressive sources of pu-erh tea in the Western market. Louie’s teas are not for beginners, and that’s exactly how pu-heads like it. “There’s something about pu-erh that attracts connoisseurs,” Louie says from her home-office tea room outside Los Angeles. “Other teas grown elsewhere can be really good, of course, but they won’t give you the mouthfeel and body feel that pu-erh offers, a kind of satisfaction. It can become a tea drinker’s lifelong obsession.”

A slight 64 years old, Louie has the bearing of a younger Madhur Jaffrey. She speaks with the same cool deliberateness, and her casual confidence keeps me at ready attention. Louie and I have corresponded for years and met in person before, but I don’t want to miss a word of her lesson.

Before starting Bana 12 years ago, Louie was a high-ranking administrator in Los Angeles’ superior court. She’d been drinking tea seriously since the 1980s, when her sister and brother-in-law began sending her loose leaves as gifts from his travels across China. “Every day at work, I would drink different kinds of tea all afternoon,” she says. One rabbit hole led to another, and she started reading books and scholarly texts on tea’s history and manufacture. Then, in 2003, something happened. “I can’t explain it, but I felt like I needed to do something more with tea. I thought, if I don’t do it, I’ll regret it on my deathbed.” She set a five-year exit plan and gave notice that she’d be taking an early retirement. “I didn’t have a grand plan or a lot of money,” she says, but through family in Hong Kong she had some distant connections to someone in the local tea business, which at the time was hot with pu-erh fever. In 2008 she booked a ticket with hopes for the best.

Just like wine and spirits in the West, tea in China is subject to wild trends, and thanks to speculative interest from collectors in Taiwan, Hong Kong and Guangdong dating back to the 1990s, pu-erh prices were ballooning ten thousand fold. To understand why, it helps to know how pu-erh is made.

In the tiny world of American tea enthusiasts, who congregate on blogs, Reddit forums and private Slack channels, Bana is considered one of the most impressive sources of pu-erh tea in the Western market.

Fresh pu-erh leaves are processed similarly to many Chinese green teas. After a brief withering, farmers toss the leaves in wood-fired woks to deactivate enzymes responsible for oxidation—browning in the leaf akin to a bruised banana, which if left unchecked would transform the leaf into tannic, malty black tea. But where green teas are cooked at a high temperature to completely shut off these enzymes, pu-erh is fired with more moderate heat, so the leaves’ chemical activity doesn’t stop completely. Drying the tea in the sun allows a host of bacteria and fungi to survive on the leaves, even once they’re totally dehydrated. The short version of this biobabble: Pu-erh is alive, and over time, microbial and chemical activity in the leaves mellows and enriches the tea’s flavor, transforming it from a bitter, vegetal brew to something rich and sweet, with layers of dark fruit and old books. In other words, pu-erh can be aged, and while local tastes in Yunnan skew toward drinking pu-erh fresh and green, collectors may sit on their stock for decades before brewing their precious tea—or selling it, in some cases at vastly appreciated prices. Louie carries tea from as far back as the 1970s. Antique cakes from the ’50s routinely sell at auction for tens of thousands of dollars.

Vesper Chan, the owner of Best Tea House in Hong Kong, is one of the stars of the pu-erh boom, and back in 2008, Louie approached him to study the art and science of tea in general and pu-erh in particular. Chan taught classes to hundreds of students, but took an immediate liking to Louie. “I think he saw my determination to learn,” Louie says. After hours of private lessons, she mustered the courage to ask if she could join him on his trip to Yunnan in the spring, to meet with farmers and study pu-erh at its source. He agreed, and by March, Louie found herself in some of the most revered tea gardens in Yunnan. Bana Tea Company came into being later that year.

Yunnan Province is considered to be one of the ancestral birthplaces of the Camellia sinensis tea plant, and even after decades of rapid development spurred in large part by the pu-erh boom, the region’s remote mountains are still a primordial soup of biodiversity. This extends to the tea trees, which grow wild in the tropical forests interspersed with other plant life and if left unchecked might live for hundreds or thousands of years. A select few truly ancient trees are protected by local governments; picking new leaves is prohibited in some cases, and the trees are fixtures of local pride and, increasingly, tourist attention. Like every other tea-growing region, Yunnan is also full of plantation-style bushes, which are grown from clonal cuttings, packed in dense rows for high yields, and pruned short for easy picking. But leaves from rare untamed and older trees command the highest prices for their rich flavor, complex mineral composition and sassy fortitude. They’re trees that have earned their place in the world.

This is the type of tea Louie loves to drink and share, the kind, she explains, that delivers a brew with unmatched intensity, thickness and aftertaste and can endure dozens of steepings, even when the tea is young and green. Pu-erh nerds are especially drawn to old- tree teas for the somatic effects that can accompany their vivid flavor. These include a powerful cool sweetness that lingers in the throat, a gentle or fiery warmth that can radiate through your body, and even a kind of natural high. The effect is different for everyone, and requires its own kind of practice, similar to the mental and physical self- awareness that meditation can help one achieve. For those just wading into the pu-erh pool, it’s best not to get too wrapped up in the whole thing; the more expectations you have, the more the experience eludes you.

Like any fast-growing industry, pu-erh has its share of charlatans: crafty smugglers who sneak pedestrian tea leaves into famous regions under cover of darkness, then sell their stock to unwitting travelers at inflated prices; merchants who’ll scrape tea cakes along the road to give their wrappers a weathered appearance, simulating an antique; farmers who misrepresent the age of the tea trees they pick from, because for the first time in their lives, they have an opportunity to improve their standard of living. Half a world away behind a language barrier, American tea sellers are particularly susceptible to misleading their customers—unknowingly and otherwise. “People say it’s easy to get cheated doing business in China if you don’t have the work experience under your belt,” Louie says. “It’s easy to make wrong decisions. But I spent 27 years managing and dealing with all sorts of people before I went into tea.”

American tea websites often go above and beyond to tell the story behind each of their teas in hopes of making a connection with potential customers passing by. Bana’s descriptions are far more spare. Louie prefers to let the tea speak for itself, and since her customers trust her palate, many don’t mind spending three or four figures on a tea they’ve never tasted before. “Age,” Louie continues with a barely perceptible smirk, “can be a good thing.”

Editor’s Note, October 7, 2020: In the original version of this story, which ran in the July/August 2019 issue, Linda Louie was misidentified as a high-ranking clerk in Los Angeles’ superior court. Her role at the court was high-ranking administrator. 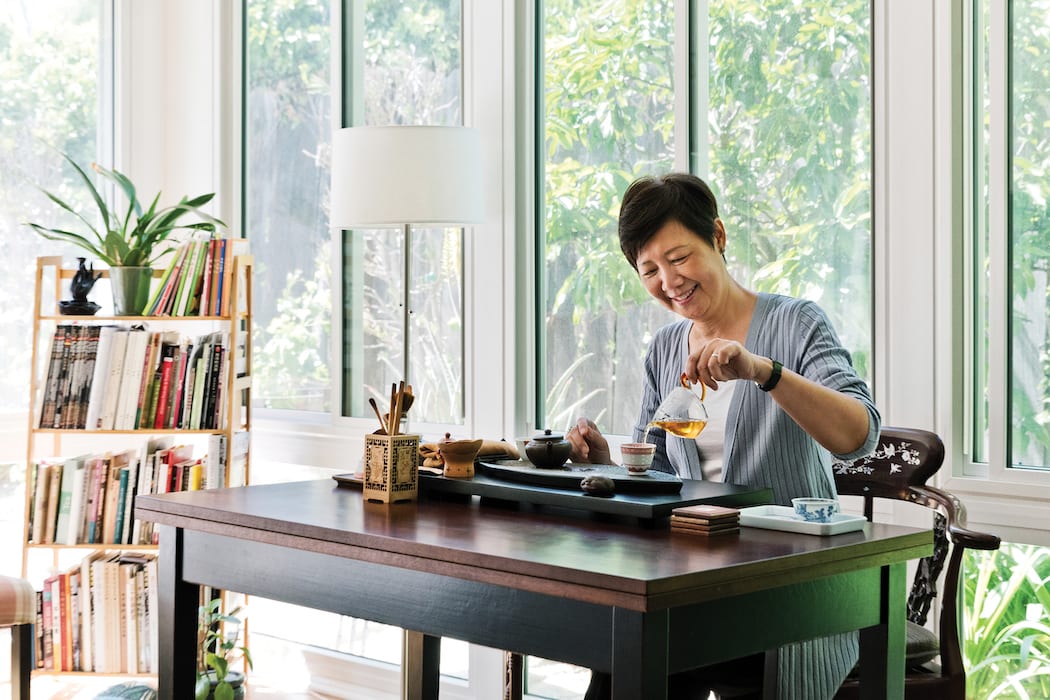 Get to know one of the world's most prized teas. 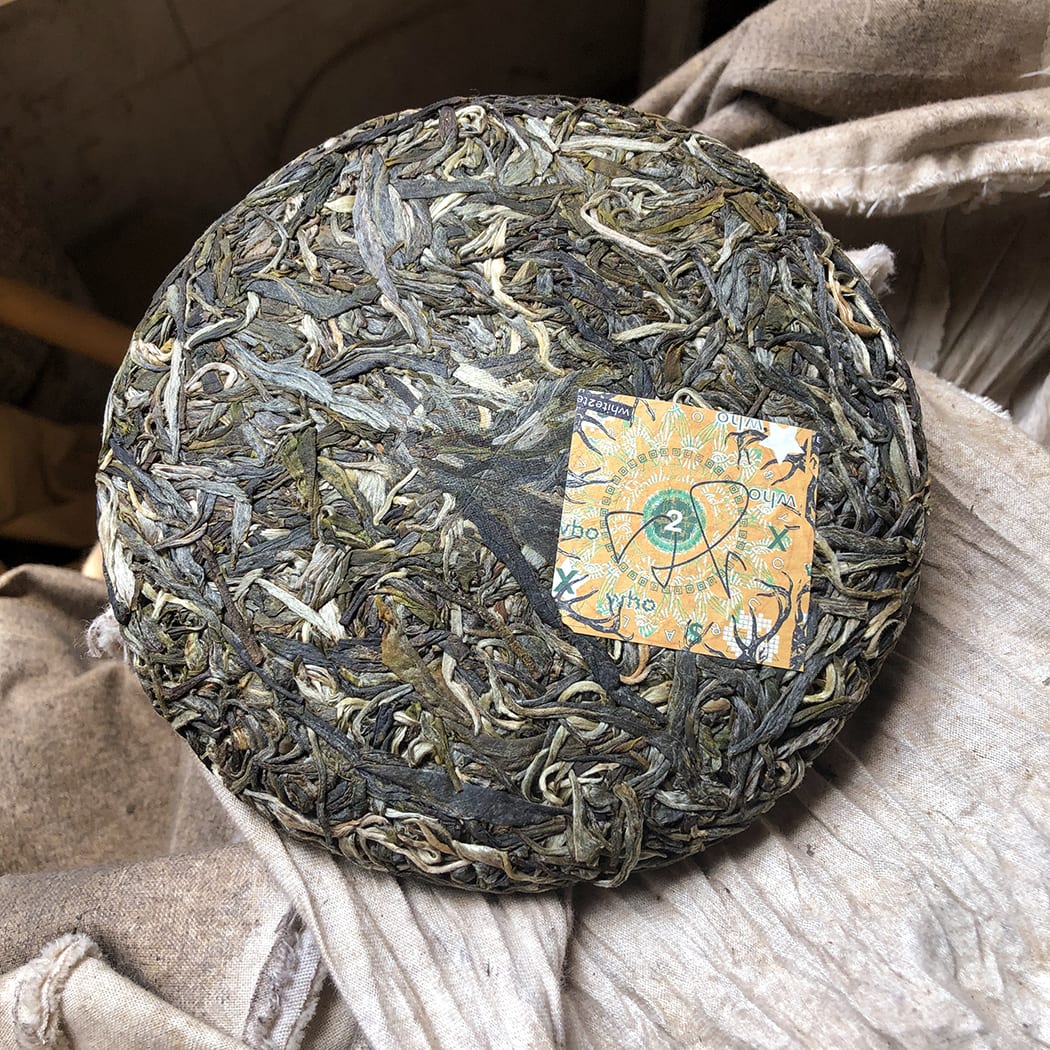 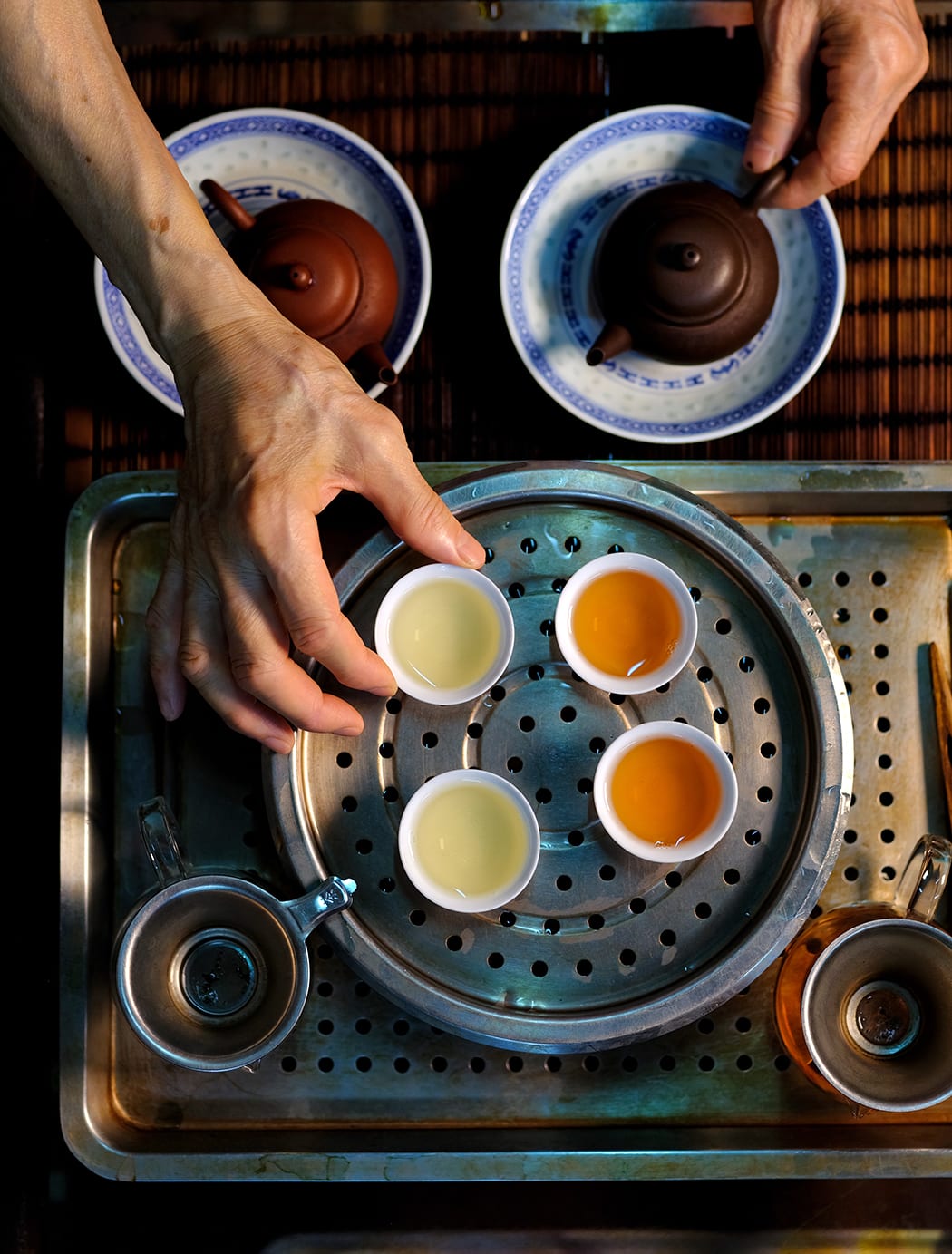