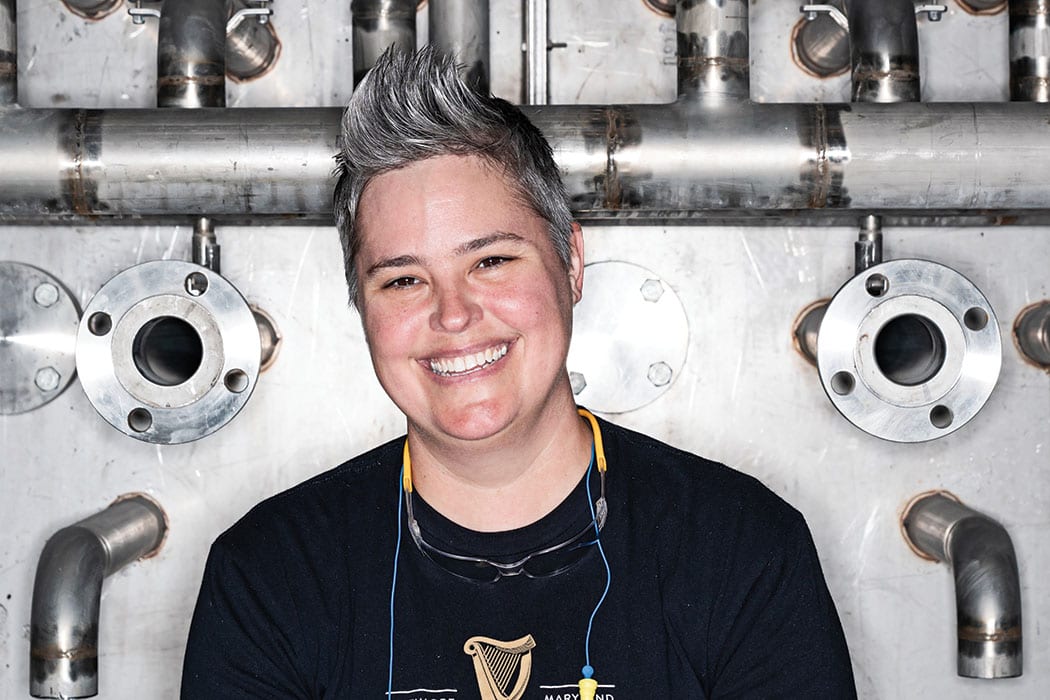 Hollie Stephenson might have America’s best-traveled deep fryer. Over the past decade, Stephenson has ported her appliance, her hush puppies recipe and her wife, Rebecca, cross-country a couple of times. They traveled from Washington, D.C., to Stone Brewing in San Diego before relocating to Asheville, North Carolina, where Stephenson set Highland Brewing on a fresh course. Now, as head brewer at Baltimore’s experimental Open Gate Brewery & Barrel House, Guinness’ first U.S. brewery since 1954, Stephenson is bringing the Irish icon beyond the stout, brewing citrusy IPAs and witbiers fermented with Guinness yeast. “We’re able to experiment in whatever ways we want,” Stephenson says.

Brewing is profession two for the Georgia native, who attended Ohio’s University of Akron on a basketball scholarship. “Being a gay kid in the South, I wanted to get as far away as I could,” says Stephenson, who finished college in D.C. While working as a lobbyist, she would unwind at the Black Squirrel bar, where she fell for craft beer and into a new career. She attended brewing school in England and signed on at Stone, in 2011, as an assistant brewer. “I got to learn when the industry was at its height of growth,” Stephenson says. At Stone, she discovered a knack for brewing’s practical and physical work, climbing to a supervisor role. But at Highland, where Stephenson came on as head brewer in 2015, she unlocked another skill: recipe formulation.

Highland is known for the malty Gaelic Ale, but modern customers craved hops, not grains. “The whole industry was forced to make changes,” Stephenson says. “It took a long time to say, ‘Okay, we need a West Coast IPA.’ ” She relied on her precise, recipe-intensive cooking skills—she’s killer at cheese grits and Latin cuisine—to develop a piney and tropical IPA that became the AVL and the orange-y Mandarina IPA, beers that brought the brand fresh buzz. “It’s exciting to see the role the beers played in the continued evolution of Highland,” says Stephenson, whose crisp pilsner also entered the year-round lineup.

Now at Guinness, Stephenson still tiptoes the tightrope between the past and future, taking something old and making it freshly brewed. “We brought Harp and Smithwick’s yeast over and put those in American craft beer for the first time,” she says. She’s aging beer in spirits barrels and is eager to play around with yeast strains isolated long ago, when Open Gate was a Seagram’s bottling plant. “There are literally hundreds and hundreds and hundreds of swabs of things, like, ‘This came from Jerry’s lime that he was squeezing into tea,’ ” Stephenson says of the banked yeast. (Parent company Diageo owns Seagram’s and stores the yeast at its Chicago technical center.)

Stephenson savors the freedom of operating a pilot brewery for experimental beers, and a production rig. Today’s taproom exclusive could be tomorrow’s national release. Will folks clamor for an oatmeal pale ale fermented with Smithwick’s yeast? There’s only one way to find out. “If you don’t put it out in front of people, they’re never going to change their minds,” Stephenson says.