The one thing I didn’t expect to notice when I returned to Boedecker Cellars’ winery was the one thing that hit me first: the aroma. Last weekend’s bright fragrance of sticky-sweet grape juice had been replaced with the effervescent essence of fermentation. The air was almost fizzy, like the tiny bubbles that tickle your nose when drinking a glass of Alka-Seltzer, and laced with nuances of black cherries and lavender. Half of the 20 tons of Pinot Noir grapes evenly distributed in neat rows of four foot-by-four-foot bins on the winery floor were actively fermenting. Walking past, I could hear them quietly hiss as the yeast converted the grape sugars into alcohol, releasing the whispering carbon dioxide along the way. With bins strategically placed less than a foot apart on the winery floor, it was obvious that forklift-driving lessons were out of the question. This weekend, I was to be schooled in the art of punch-downs and pump-overs, which is wine-speak for extracting color and character from the grape skins and circulating the juice from the bottom of the bins to the top. 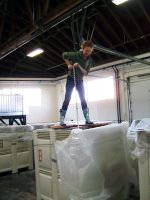 Labor-intensive but rewarding, punch-downs require you to take what looks like a long metal plunger and literally punch down the cap of grape skins that rise to the surface as the juice starts its fermentation process. I grabbed my plunger, headed to the first bin and, like a kid scaling a jungle gym, tucked my foot into the small ledge halfway up the bin and pulled myself to the top. For a moment, I thought I would fall into a vat of fizzing grape juice, but I quickly found my balance and pushed the plunger into the mix with all the upper body strength I could muster. The aromas of sweet grape soda and ripe blackberries wafted up to my nose as the skins were pressed back into the juice. 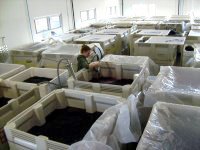 Pump-overs require less acrobatic skill, but more of an ability to untangle yourself from yards of hosing, while you pump juice from the bottom of the bin over its cap on top. An elongated cylindrical metal colander, known as a torpedo, is placed deep into the bin of juice, and the top of the torpedo, rising just barely above the surface, is attached to a long hose. With the help of an electric air compressor, that hose sucks and strains the juice through the torpedo at the bottom of the bin and pumps it out a spigot and onto the cap, aerating and circulating the juice from the bottom to the top.

With about 30 bins in the winery—most getting punched down and pumped over at least once a day—after three days I was tired and ready for a shower. By weekend’s end, purple wine stains traced every crack in my dry hands, and bruises from failed attempts at scaling wine bins dotted my shins. I left exhausted, but exhilarated, and ready for a nice, cold … beer.

Stay tuned for next week’s report on turning red grapes into white wine.