Freddie Johnson Has a Story to Tell 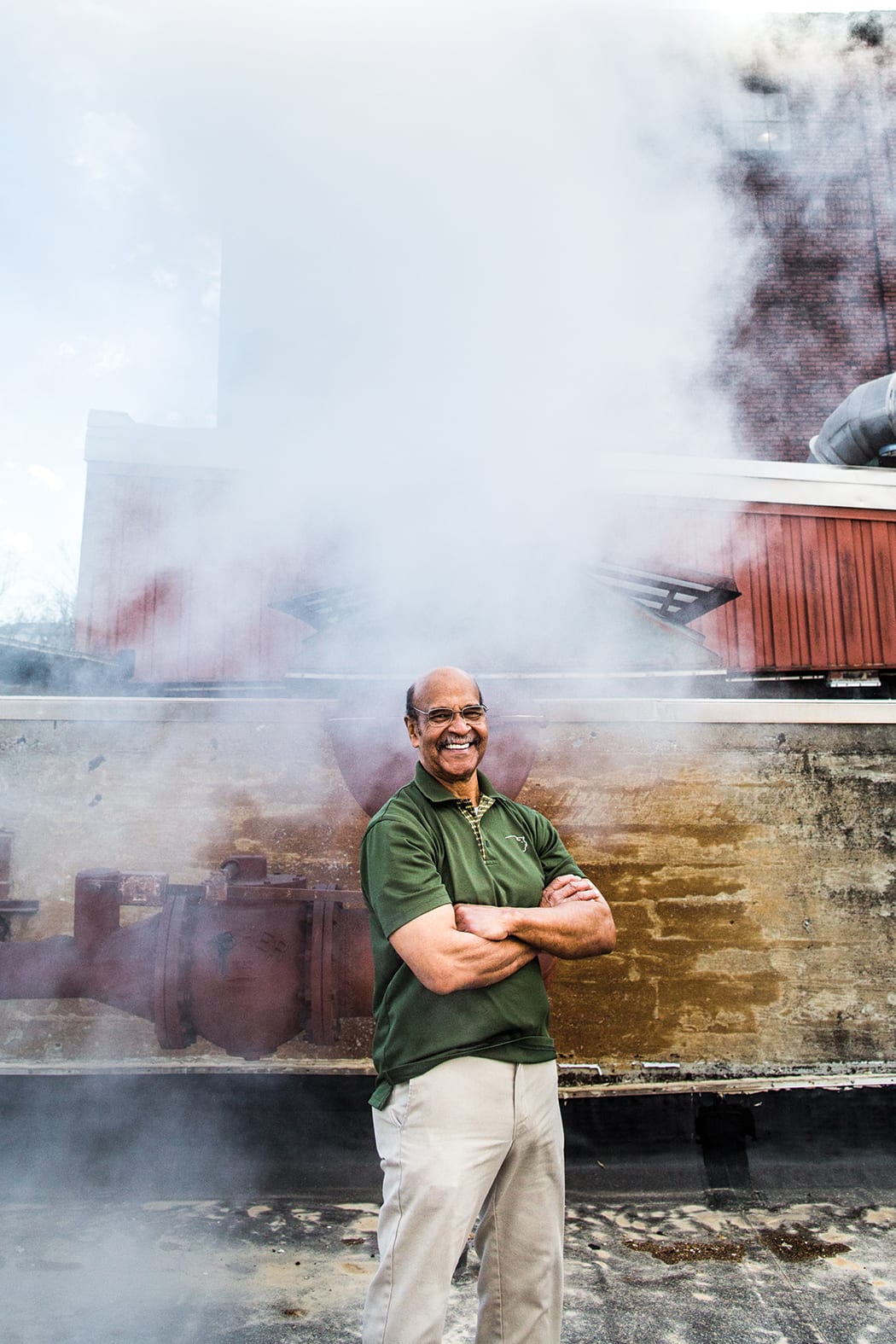 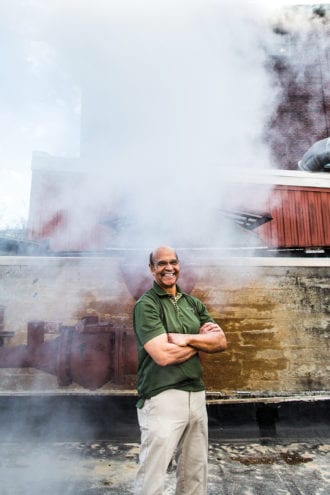 Freddie Johnson is holding court in front of Warehouse C at the Buffalo Trace Distillery in Frankfort, Kentucky. “This building goes back to 1860,” he tells a group of some 30 tourists, “but the original material—the wood structures holding all the weight—goes back to 1797. It holds 24,000 barrels of whiskey. A full barrel of whiskey is 550 pounds. So that is over 6,000 tons of whiskey on timbers that go back to the 1700s! And this warehouse still produces some of the highest rated whiskey in the world.”

Johnson is a celebrity tour guide. This isn’t a title one can apply for—it’s earned. In Johnson’s case, he earned it over 16 years of leading groups. (During my visit, a white-haired gentleman walked past, saw Johnson, and excitedly announced to all: “Oh! He’s a great guide! We had him when we were here eight years ago!”) Johnson’s renown was enshrined last September when he was inducted into the Bourbon Hall of Fame, the highest honor conferred upon those working in Kentucky’s distilled spirits industry.

Johnson, still in front of Warehouse C, is now talking about the people who built it. “Their passion was making whiskey, but they were actually architects,” he says. “They were structural engineers, they were chemists, they were biochemists, they were arborists, they understood the rotation of the earth and the density of materials.” Bourbon makers, he says by way of wrapping up his soliloquy, had to be talented in a whole slew of fields.

Much the same might be said of the best tour guides. They know facts and data, they know history, they know how to tell a story, and they know how to wrap it all up with a neat bow. But most of all, they know how to leave visitors not just crammed with information, but with a deep emotional connection to the place. They also have to do this while walking backward.

Johnson brings an extra dimension to the mix: authenticity—he’s the third generation of his family to work at Buffalo Trace (formerly Ancient Age). His grandfather started here in 1912, and Johnson says he was the first African-American warehouse manager of a major distillery. Johnson’s father also had a 42-year career here doing just about everything that needed doing, from managing warehouses to filleting fish at company cookouts. Johnson has fond memories of visiting the distillery with his granddad and dad when he was young. He recalls fishing in the river that runs along the property, then scrambling up ladders to peer through holes when he got bored. (“I looked like a little groundhog,” he says.) He wasn’t allowed in any buildings until he was five (“barrel danger”), and then was captivated by everything he saw. “That was when I really got excited about all the things that went into making whiskey,” he says.

He assumed he’d follow the family into the business when he came of age. But when he graduated high school in 1963, the bourbon market was vectoring into a slump, and the distillery was laying off rather than hiring. Meanwhile, he’d shown an aptitude for “electricity” in school (“They didn’t call it electronics back then,” he says), and he went on to win a 4-H competition for a circuit breaker–like device he’d devised, which led to a visit to Washington, D.C., which in turn opened his eyes to career possibilities in a new and growing field. “That trip made me realize the world is bigger than Frankfort, Kentucky,” he says. He went on to study electronics, followed by a 31-year career with AT&T’s Bell Labs in New Jersey and elsewhere, helping the telecom giant develop successive generations of technology.

Around 1999, he got a call from his father with bad news: He was terminally ill with cancer. Fulfilling a long-ago promise to care for him if he was needed, Johnson took early retirement and returned home to Kentucky to be with his dad. While there, Johnson looked to get involved in various business ventures and community activities, so his dad suggested he ask the distillery about becoming a guide. He was hired, but he’d begun preparing for his tours even before formal employment, in part by exploring the grounds with his dad while listening to his stories and those of his co-workers. “He’d say, ‘remember this’ and ‘don’t forget that,’ and ‘tell this on your tour,’ ” Johnson says. “And I realized then what he was actually doing was handing off the baton. It was him being so proud of being here, and he didn’t want that to end when he passed away.”

Johnson is a natural entertainer. He often leans in to the group to share tales and facts, as if he’s revealing a terrific secret. “The top floors of the warehouse produce the bottom-shelf bourbons in the store,” he says at one point. “Your more economical brands—you know, plastic bottles, screw caps, Friday nights when we didn’t have much money—those are the ones that burn your nose. Those are the tannins!”

Johnson’s voice has a bright timbre and often skews higher, which allows the information to float over the persistent din of various machinery and venting steam. And that seems to arise from some scarcely contained enthusiasm, about sharing one more story with his new friends. “Heads up!” he says ebulliently more than once. Not as a warning for low beams, but to encourage people to gather in, as he’s about to share another insider’s tip.

He also displays a knack for connecting personally with people on the tour—he learned one visitor in our group was named April, and so he often singled her out in his patter, as in, “Let’s pretend April wants a drink. What is she going to order?” And he seamlessly telescopes from abstract ideas to well-told tales only to return to a broader, birds-eye view. “There are subtle things and obvious things,” he says, beginning one excursion into how flavors form in the barrel. Everyone leans in.

Johnson is a virtuoso—he embodies the philosophy of Sazerac CEO Mark Brown (which owns Buffalo Trace), who often reminds people that the liquor business is actually part of the entertainment industry, competing for dollars against movies and television.

“Ready? Come here!” he says, as he leads the group into a dim and redolent barrel warehouse. (Johnson seems incapable of speaking a sentence unpunctuated with an exclamation mark.) “I want you to just take your hand and rub over these barrels as you head down through here, and you’ll notice something. They all feel different.”

Johnson talks about how white oak might vary by location and age, and also how the pressure and the whiskey moving in and out can cause the cask heads to warp. “Check this out!” he says as he demonstrates the proper fingertip grazing technique to feel the wood grain, then leads the way out the door to the next destination.

Johnson is 73 years old but has the bristling energy of someone much younger. He says he still loves giving tours, which can take him from the 1873 O.F.C. distillery (the so-called “Bourbon Pompeii,” with its unearthed fermentation tanks), to describing the next generation technology—a new GPS-enabled distribution center, which curbs paperwork and allows shippers to get in and out in 15 minutes, far quicker than before. “We’re in the middle of something old and something new, so I’m like a conduit, helping people understand where we’ve been and where we’re going,” he says. “I’m just as excited about bourbon now—even more so—as I was when I was younger.

“When people come in, it’s not a distillery,” he adds later, drawing out the word distillery. “We give them a chance to feel emotionally connected by letting them see, touch and feel the very things that make that product what it is.”

Today’s tour is starting to wind down, and we’re headed out of the bottling plant on to what’s next. “Cool beans!” he says, another of the verbal tics he uses to let visitors know one segment of the tour is ending, and he’s about to start another. He sets off at a good trot down a pathway. “If you’ve got your camera, I’m going to show you a cool spot!”