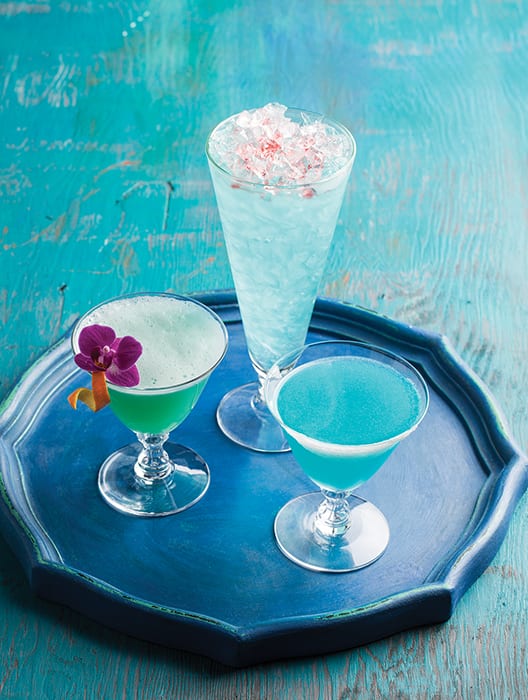 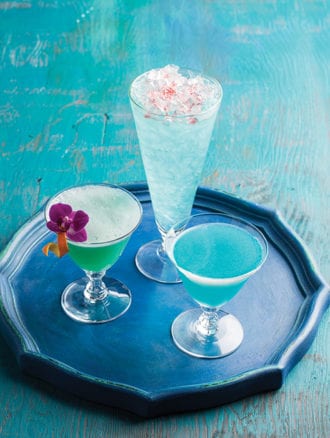 When Isaac Newton laid out his third law of motion, that for every action there is an equal and opposite reaction, he probably wasn’t considering the cocktail renaissance. But as overtly serious cocktail bars became the norm in the early years of this century, a more lighthearted approach beckoned. Enter the Corpse Reviver No. Blue, the cocktail that many pinpoint as patient zero behind the comeback of an ingredient that had become synonymous with the schlocky, gimmick-laden drinks of past decades: blue curaçao. “It was a reaction I had to the super-seriousness that went along with the cocktail revival,” says Jacob Briars, who created the drink in 2007 and now serves as the global advocacy director for Bacardi. “The more serious the bar I was in, the more pleasure I took in ordering a blue drink.”

Briars’ creation—simply a classic Corpse Reviver No. 2 that swaps in the blue-tinted, orange-flavored ingredient for the traditional Cointreau—has held up for the past decade because its playful aesthetic actually delivers tried-and-true flavors. “It tastes broadly and very much like a classic cocktail from the 1920s and ’30s—it just happens to be blue,” Briars says. “That probably allowed it to be the Trojan horse for blue drinks getting a little bit of respectability again.”

Joaquín Simó, co-founder of Pouring Ribbons in New York City, which has featured blue drinks such as the Sno-Cone, recalls other early blue beacons of hope—from originals like the Shark, a drink from John deBary during his time at PDT, to cleaned-up disco drinks like the Blue Hawaii, which Portland, Oregon, bartender Jeffrey Morgenthaler revamped at Pépé le Moko. The blue boom was buoyed by the 2015 arrival on the U.S. market of Giffard’s Curaçao Bleu, which showcases the bright, clean citrus notes and soft bitter backbone of the hybrid bitter orange Citrus aurantium, found on the liqueur’s namesake Caribbean island. The product helped fuel a blue revolution, Simó says, “because you weren’t stuck using a really crappy, really bad triple sec.”

With a quality option available, more bartenders have opened up to the blue stuff. “It has an association with bad drinks from the ’80s because of the sugary fake mixes it was paired with,” says Gaby Mlynarczyk, who serves a Blue Lagoon riff at Accomplice Bar in Los Angeles. “Pair it with something fresh and good quality, though, and it becomes a must-have behind the bar.”

Whether it’s used half-ironically or not, blue curaçao brings bartenders and drinkers back to the main reason for going out to a bar—to have fun. “Ultimately, the job of a bartender is to help a guest have a fantastic time,” Briars says. “Every time I served one of these drinks or ordered one for somebody, their eyes would light up and they’d start smiling or laughing.”

Suomi 100
Pine, spruce or juniper needles collected during a summer hike can be directed into this alpine-accented cocktail with a deep blue tinge.

Prepare a chilled glass by moistening half of the rim with a cut lemon wedge, and dipping the rim into superfine sugar. Shake all the ingredients with ice, then strain into the prepared glass.

Forest Syrup: Combine 1 cup of granulated sugar with 1 cup of water in a saucepan over medium heat, then bring to a boil, stirring to dissolve the sugar. Add a handful of pine, spruce or juniper needles and remove from the heat; let steep as the syrup cools, then strain before use. Keeps refrigerated for up to 1 month.

“Blue Lagoon”
Blue drinks had their bad days, but Gaby Mlynarczyk cleaned up one classic recipe and serves the new-and-improved version at Accomplice.

Shake all the ingredients without ice for about 5 seconds, then add ice and shake again until chilled. Strain into a chilled glass and garnish.

Pineapple Syrup: In a blender, combine 1 cup of simple syrup (1:1) with 8 oz. of chopped pineapple (Accomplice roasts the pineapple beforehand to deepen the flavor, optional) and ¾ oz. of vodka to stabilize. Blend on high until smooth, then strain and bottle. Keeps refrigerated for up to 2 weeks.

Jake Emen
Jake Emen is a freelance drinks, food and travel journalist based in San Diego, but most of his time is spent on the road in search of the best food and drink the world has to offer.