Drink(s) of the Week: Best of the Oregon Brewers Festival - Imbibe Magazine Subscribe + Save
Skip to content

Drink(s) of the Week: Best of the Oregon Brewers Festival 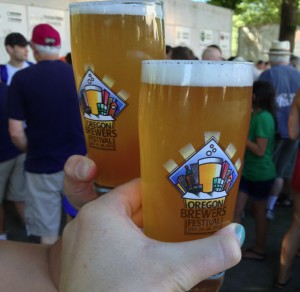 It’s that time of year again—beer under the big top at the 26th annual Oregon Brewers Festival. Held along Portland’s downtown waterfront every July, it’s one of the country’s largest and longest-running beer fests, bringing together more than 80 brewers from around the country to pour some of their best beers. Running though Sunday, there’s still plenty of time to head down for a pint (click herefor event info). Not in the area? No problem—though many of the brewers use the fest as an opportunity to showcase some one-off suds, others instead opt to pour kegs of their most popular brews. Here are five of our favorites that make it beyond festival tents into bottles and cans across the country.

Anderson Valley Summer Solstice Cerveza Crema
Boonville, CA, 5.5% ABV
If cream soda and a mellow pale made a beer baby it would taste like this golden cream ale from northern California’s Anderson Valley. Crisp yet creamy, expect clean notes of caramel followed by just a hint of hop spice. Available in cans, it’s a great go-to for summer.
Boulevard 80-Acre Hoppy Wheat
Kansas City, MO, 5.5% ABV
Love a hearty wheat beer and a hopped-up IPA? Thanks to this hybrid brew you don’t have to choose between the two. Combining a bouquet of hop varieties (including New World favorites Nelson Sauvin, Cascade and Summit) with malted, unmalted and pale malts, this American pale is bright and snappy, with a distinctive touch of toast.
Dogfish Namaste
Milton, DE, 5% ABV
A collaborative brew with Italy’s Birra del Borgo, this riff on the traditional Belgian-style wit bier is spiked with dried orange, fresh lemongrass and ground coriander. With a low ABV to boot, this is one summery refresher we could sip all season long.
Great Divide Colette Farmhouse Saison
Denver, CO, 7.3% ABV
Saisons are the traditional beer of summer, and this farmhouse ale from Denver’s Great Divide is a delicious example of the style. Brewed from a mix of wheat, barley and rice, and fermented with four different yeast strains, it’s got all the fruity, tart refreshment classic to the style, but with a little added oomph all its own.
Surly Brewing Overrated West Coast IPA
Brooklyn Center, MN, 7.3% ABV
Its name may be poking fun at West Coast brewers’ affinity for über-hopped IPAs, but this brew from Minnesota’s Surly is no joke. Brace for a four-hop bite, followed by a quick palate-cleansing sweep of crystal malt sweetness.