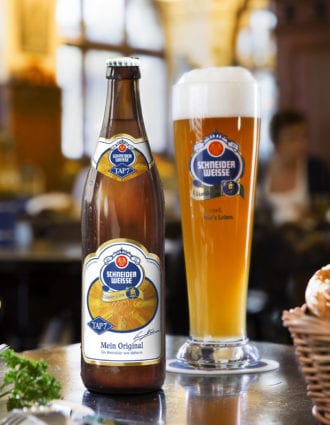 For this installment of our Imbibe 75 Drink of the Week series, we asked Aaron Hulme, co-owner of San Francisco new-age Bavarian beer hall Radhaus to recommend a favorite brew. With a tap list spanning Germany’s famed beer styles, from helles to pilsner, Hulme is currently fueling up on a classic: the Schneider Weisse “Tap 7” Original. “It is the original wheat beer style from Munich that was resurrected by Georg Schneider in 1872,” says Hulme. “The brewery has since passed through his family’s seven generations that still run it today—all of them named Georg Schneider.” Along with his brother Matt, Hulme visits to brewery as often as possible (Radhaus’ tables and chairs are sourced from Schneider). The Original is an exemplary German hefeweizen, providing sips filled with warming nutmeg and banana bread. “Radhaus serves this beer with reverence for its history, and excitement about its future,” he says. Available in specialty beer stores and groceries nationwide.