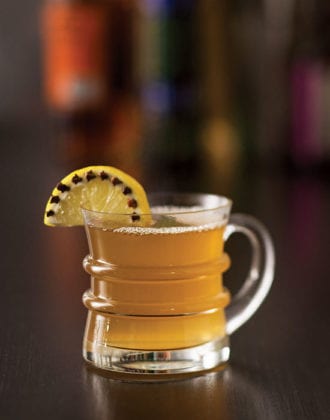 Simple, classic and warming to the core, the classic hot toddy holds a kind of reverence as both historic warmer and folk remedy, rivaling chicken soup in its ability to soothe the sick. Versions have circulated for centuries, from 19th-century bartender Jerry Thomas’ Irish Whiskey Punch with hot water and lemon oleo saccharum, to the flaming spectacle of the Blue Blazer. Jim Meehan, a native Midwesterner and partner in PDT in New York City and Hong Kong, is no stranger to cold-weather cocktails, and his recipe for Hot Whiskey is an easy-to-mix hybrid of a couple of Thomas’ recipes, drawing inspiration from a trip to Ireland. “I saw a patron sipping this toddy the locals called ‘hot whiskey’ in a pub in Galway on a chilly rainy day, and I ordered one without hesitation,” he says in his book, Meehan’s Bartenders Manual.

To make the drink, preheat a tempered mug, then add 4 oz. of hot water, 1½ oz. of Irish whiskey, and 1 oz. of honey syrup. Meehan makes a slightly richer syrup using two-thirds honey to one-third water, but he says sweetening with sugar, agave or maple syrup works just as well.

The key to this cocktail is the garnish—toss it in the drink. As Meehan says, “… If you combine hot water with alcohol, heady fumes will evaporate from the glass, repelling all but the most intrepid imbibers. The lemon floats to the surface, blocking the steam from billowing up, and the heat from the water enhances the cloves’ aromatics.”

Tip: Opt for a bold, flavorful whiskey (Meehan uses Powers Irish Whiskey), or substitute any pot-distilled spirit of personal preference. Likewise, hot tea can be used in place of water, and spices like nutmeg or cinnamon can be added to taste.

A delicious homage to Charleston.