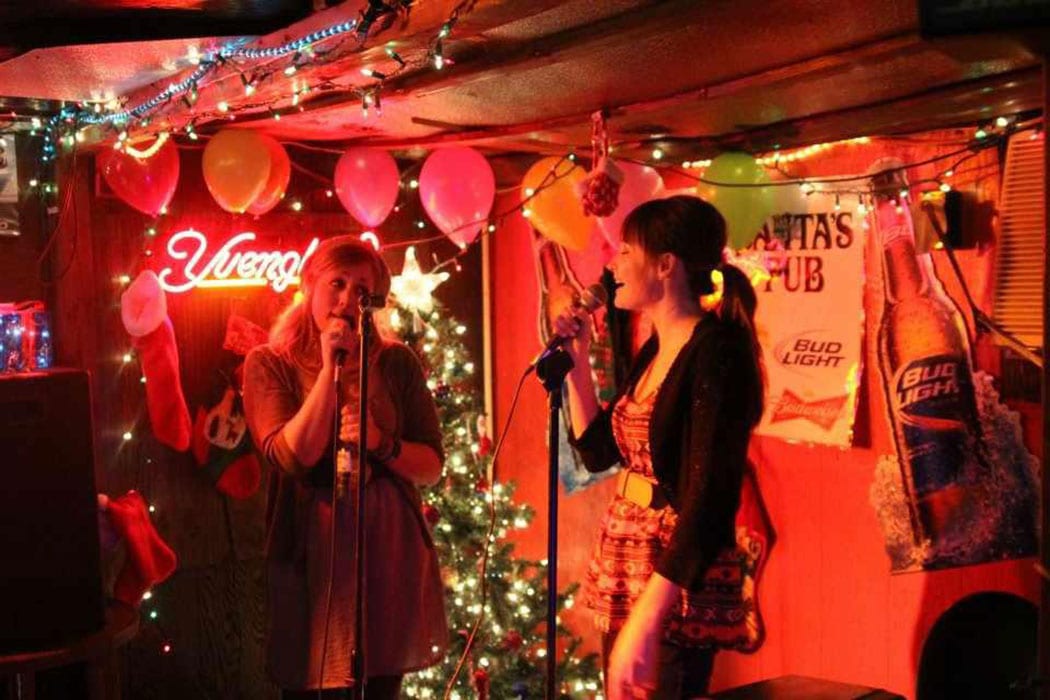 Music City has its fair share of great karaoke bars and gritty hole-in-the-walls, but few fuse the two concepts together as perfectly as Santa’s Pub, a tiny, smoke-saturated bar that, as its name suggests, is always decked out for the holidays. “Santa’s Pub is hands down the best dive in the country,” says recent transplant RJ Cooper. The James Beard award-winning chef, motorcycle enthusiast and dive bar devotee (now helming the kitchen at Henley) has spent plenty of time scouting the city’s best dives since moving to Nashville in 2016, and Santa’s Pub is his favorite. “I was skeptical at first, but a musician friend of mine took me there, and we drank beer and I watched him sing karaoke and we had a great time.”

Located  in the quickly growing Wedgewood Houston neighborhood, Santa’s Pub is a short drive from the daiquiri-centric bar Hemingway’s and the acclaimed Corsair Distillery. A mural of Santa Claus on a motorcycle marks the doublewide trailer that houses the bar, and inside the cramped space, Christmas lights, tinsel and various other holiday paraphernalia stick out haphazardly around rafters and rusty nails. The beers are cheap and most people smoke there. “It’s like being in someone’s basement, with tables you’d find in a bingo parlor,” Cooper says. “Downing beers, smoking cigs and singing all night long—it’s a one-of-a-kind spot.”

The bar is cash-only and the menu is no-frills: $2 beers, $3 wine coolers and soda. The mic warms up for karaoke seven nights a week, and unlike some of the city’s other well-known venues, the vocal crowd at Santa’s isn’t overrun by aspiring musicians. The sign-up sheet encourages a democratic atmosphere with a simple, “Everyone’s a star,” written plainly in red permanent marker. “From bachelorette parties to people in suits, chefs and major music artists, it’s such random people, but it’s totally a Nashville bar and a Nashville scene,” says Cooper. “The karaoke can be everything from the worst thing you’ve ever heard to a major country music artist to Kid Rock. It just depends on what night you hit and who’s out—I’ve even been there when a Grammy winning artist (who shall remain nameless) was there singing karaoke!”

Aside from the holiday vibes and rowdy renditions of trashy pop songs on repeat throughout the night, one of the biggest draws of the bar is the owner, Santa himself. His actual name is Denzel, and he opened Santa’s Pub in 2011 after running bars since the ’70s. Today he runs the ship with his wife Angelina. At Santa’s, he’s found his niche. “He looks like Santa Claus, and he probably knows every artist in Nashville,” Cooper says. “He’s a gruff, older man who tells great stories, but it depends on his mood on that day. He could be in a great mood, or be grouchy, but he deserves it all.”

Just remember to behave within the walls of the doublewide, because there’s not much tolerance for shenanigans. On the website, one of the house rules is to “be nice,” and inside, plenty of reminders decorate the walls, including the to-the-point sign that reads, “no cigars and no douchebags.”

“I’ve been to dive bars all over the world, and I truly have never had more fun than hanging with Santa at Santa’s Pub,” Cooper says.