Revolutionaries aren’t supposed to be endearing. But for Houston bartender Bobby Heugel, rocking the boat of the liquor world happens with a handshake and a smile.

The co-owner of Anvil Bar & Refuge—which quickly became the toast of the cocktail world following its 2009 debut—Heugel is a James Beard Award-nominated bartender and a tireless businessman, playing roles in such rising culinary destinations around Houston as Underbelly, a restaurant specializing in Houston cuisine; Hay Merchant Craft Food & Beer; Blacksmith, a cutting-edge coffee bar; and the soon-to-open cocktail bar Julep. But while establishing a modest empire of highly acclaimed bars and restaurants would be enough for many entrepreneurs, Heugel also has a higher purpose: to change the way bartenders and their patrons think about what they drink.

Chefs such as Alice Waters helped spur the food movement into locavore-oriented, socially conscious action beginning in the 1970s, and today the idea of eating sustainably is second nature to many. Heugel hopes to help move the bar business and spirits industry in a similar direction. “We buy and sell spirits and brag about how much we know, but we very rarely talk about the people,” Heugel says. “That’s something we need to start correcting: we need to recognize the value of the people who make the spirits, and how they often make them in places so much less developed than what we see in the U.S.,” referring in particular to the farmers and laborers who contribute to the production of tequila and mezcal in Mexico, and to those who make rum in Latin America and the Caribbean.

Tall, rail thin and impeccably polite, Heugel’s soft-spoken sentences tumble out at a rapid pace, and he evinces a sense of focus and studied determination. Heugel didn’t aim to be a bar owner. After completing his master’s in international communication at Illinois State University, he chose to take a break from his career path—which included contemplating both a PhD and working overseas as a peacekeeping negotiator—to come to Houston to follow a relationship and indulge his interest in bartending. After meeting Kevin Floyd and Steve Flippo—who came to know Heugel via his opinionated blog, Drink Dogma—the trio decided to put their cocktail curiosity into action, and they opened Anvil in March 2009.

It didn’t take long for Heugel and his partners to discover that running a bar entailed much more than serving drinks. “Bars and restaurants really serve as vehicles for discussing bigger issues that face cities,” Heugel says, noting it’s particularly true of places like Houston, which are transitioning into having vibrant, livable downtown areas with exciting dining and drinking destinations. “You can go out and have a great cocktail, but there are all these things that people take for granted just to get that Manhattan,” he says, such as the Byzantine regulations that independent business owners must navigate. “Every one of those things is a possible talking point.”

Heugel and his partners began engaging these issues in earnest when they started working on Underbelly and Hay Merchant in 2010 and faced repeated challenges in Houston’s parking regulations. “We faced six months of undue delays because the city wouldn’t give us a straight answer about parking requirements,” he says. At issue were regulations stipulating how many parking spots restaurants and bars were required to provide their patrons; not only did requiring more parking increase the costs for small business owners, but it also ran counter to ideas such as urban density and mass transit that are at the core of many revitalizing downtowns. “That trained me to become a real pain in the ass about the issues,” Heugel says. He and his partners realized others were encountering similar hassles, and they organized among the city’s restaurants and bars to encourage participation at hearings. “We’d have 100 bartenders and chefs showing up at city council meetings, and in December 2011, we wound up shutting the regulations down,” he says (though the proposed regulations resurfaced this past January).

During one of the effort’s evening planning meetings at Heugel’s garage apartment, the group of around 12 independent bar and restaurant owners realized their potential power, and the opportunity to make a lasting contribution to the city. The outcome was OKRA—Organized Kollaboration on Restaurant Affairs—a group aimed at engaging in charitable, community- oriented projects in Houston, with Heugel as its current president and a roster of around 25 members. OKRA gave Heugel an opportunity to fulfill a goal he’d had for years. “Even before we opened Anvil, I told Kevin I wanted to open a nonprofit bar one day, and he was like, ‘Yeah, sure Bobby.’ ”

A nonprofit bar, Heugel reasoned, would direct its proceeds to local charity and community groups and give bartenders the opportunity to talk with guests about some of Houston’s more pressing issues in a casual, non-pushy atmosphere. Last December, Heugel realized his vision—OKRA’s Charity Saloon opened in an historic building in downtown Houston.

While Heugel was leading his City Hall fight on parking regulations, a bigger problem was brewing in Mexico. At issue was a potential change in laws governing the use of the word “agave” for making and selling distilled spirits; opponents of the controversial measure included small producers of artisanal mezcal and other agave spirits, who feared the regulation—which had support from some of the largest tequila and mezcal producers—would drive them out of business. The issue attracted the attention of American bartenders, including Heugel, Phil Ward at Mayahuel in New York, Misty Kalkofen at Brick & Mortar in Boston and Ryan Fitzgerald at Beretta in San Francisco. Together with academics and other supporters, these bartenders joined the Tequila Interchange Project, or TIP, with Siembra Azul Tequila founder David Suro Piñera as its president. TIP joined with small distillers in Mexico on the front-line defense against the new rules, organizing other American bartenders and visiting Mexico to testify against the change, in an effort that ultimately proved successful last October.

Heugel says that chefs and the culinary world are far ahead of bartenders in terms of educating themselves and their guests about the social, environmental and economic issues related to food and drink. “That’s different from the local-food movements; some of the spirits we’re proud of serving will always come from these countries, and we have a responsibility to understand the impact we have on those places.”

What’s needed, Heugel says, and what TIP proved viable, is a set of purchasing guidelines for bar owners and bartenders that emphasizes economic and environmental sustainability, and social justice among spirits producers. After working closely with other restaurant and bar owners, and speaking on the issue at events including Tales of the Cocktail in New Orleans and Portland Cocktail Week, he says it’s not such a far-flung idea. “Sommeliers have standards under which they buy wine, and sometimes that includes ethical standards; spirits buyers need to do the same,” Heugel says. “It doesn’t have to be the most limiting standard in the world, but we’d do better to at least have something, because that would start the conversation with spirits companies on how they produce them.”

Anvil’s accolades and Heugel’s cocktail cred give him a powerful pulpit from which to advocate. “Bobby makes it all so accessible, and he also infuses his message with a little humor,” says Misty Kalkofen, who joined Heugel for a presentation on ethical guidelines in the spirits industry at Tales of the Cocktail last summer. “It’s a fine line—Bobby can educate without coming off like a jerk, and it engages people, and makes them want to learn more.”

Heugel says his approach to activism is similar to the way he introduced Houston drinkers to classic cocktails in 2009: provide a little information and the opportunity to learn, and let the guests proceed at their own pace. is perspective is still present on Anvil’s menu, which is paradigm-shifting and modestly grounded at the same time. Featured drinks might include envelope-pushers, such as an alluringly bitter Campari Alexander or a cocktail made with fenugreek-infused rye whiskey, but at its foundation is a list of 100 essential cocktails that Heugel initially compiled as a training tool for new staff, but that now functions as Anvil’s de facto populist manifesto. The list includes such craft-bar standards as a Sazerac and a Georgia Mint Julep, but it also features déclassé-yet-delicious renderings of drinks, such as the Long Island Iced Tea. “The bar experience shouldn’t be something that’s dogmatic,” he says, noting the irony that he assembled the educated yet pretense-free list while publishing a blog titled Drink Dogma. “Long Islands and Blue Hawaiians are ways of saying, ‘They’re just drinks!’ It’s okay for them to be fun, and if I have a recipe for an awesome Long Island and people love it, I’m going to put it on the menu.”

Whether he’s talking about the problems of monoculture in agave fields or the merits of a decent Manhattan, the key for Heugel is giving a guest the option to engage. “We’re not going to push you to order something, but there’s an eagerness to share information with people willing to listen,” he says. “There’s activism and enthusiasm in our company, but we don’t force you to do things the way we do; we just hope we’ll have the opportunity to share.” 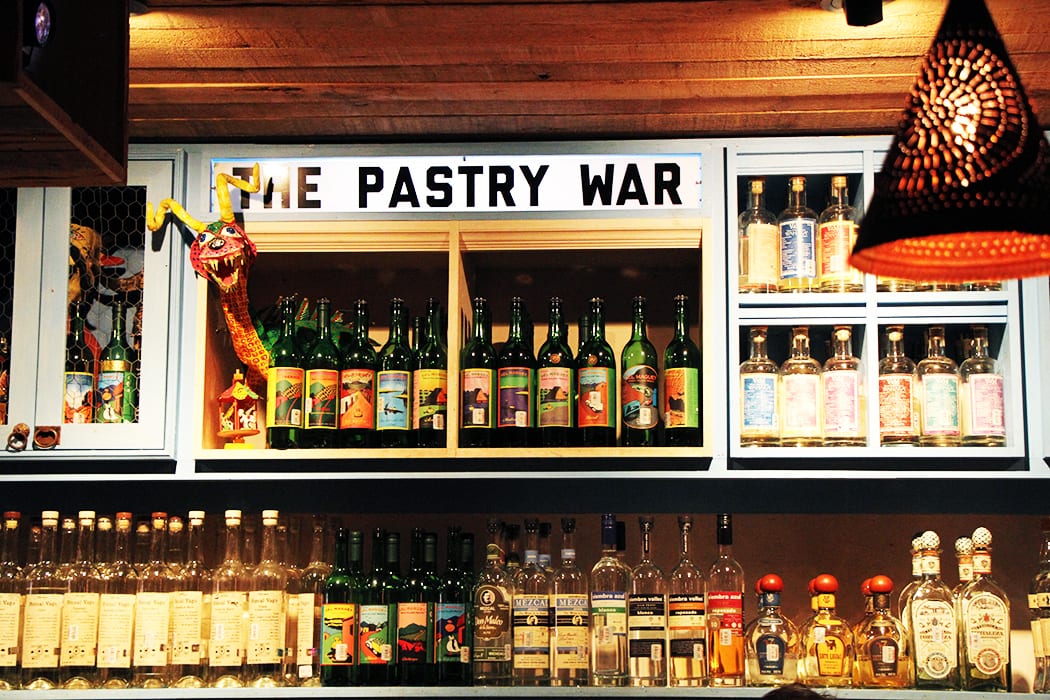 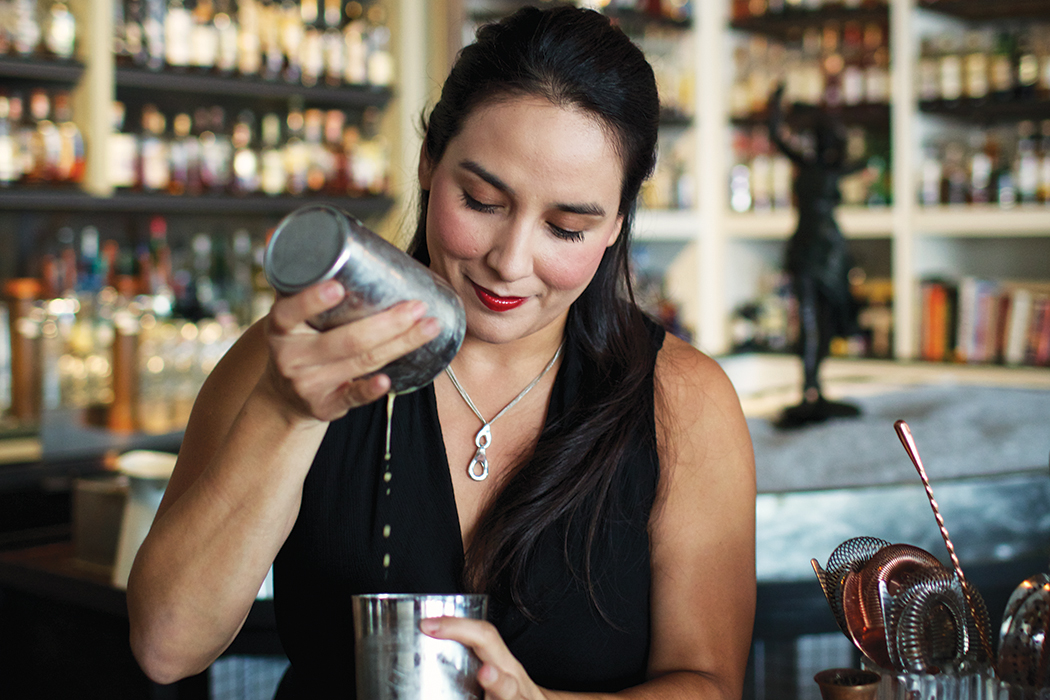