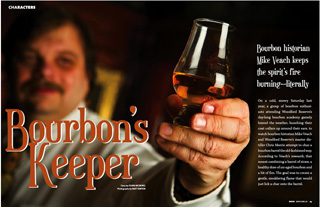 On a cold, snowy Saturday last year, a group of bourbon enthusiasts attending Woodford Reserve’s day-long bourbon academy gamely braved the weather, hunching their coat collars up around their ears, to watch bourbon historian Mike Veach and Woodford Reserve’s master distiller Chris Morris attempt to char a bourbon barrel the old-fashioned way. According to Veach’s research, that meant combining a barrel of straw, a healthy dose of un-aged bourbon and a bit of fire. The goal was to create a gentle, smoldering flame that would just lick a char onto the barrel.

The process didn’t work exactly as theorized, but class participants did learn a valuable lesson: Too much straw plus too much bourbon equals a little too much fire. Still, as buckets of water were brought in, the look on Veach’s face—more delight than defeat—indicated there would be another barrel-charring experiment. “It doesn’t take a whole lot of straw, as we found out,” Veach says with the sobriety of a lab scientist. “The second time we used a half-full barrel of straw.” The barrel-charring is now a regular event at the academy.

Veach is a special collection assistant at the Filson Historical Society in Louisville, Ky., and the only professional bourbon historian in the country. He has spent almost two decades sifting through the personal papers of bourbon’s royal families and studying the distilling industry and culture of the time to clear up mysteries, dispel myths and answer any hows and whys that might catch his imagination. His energetic approach has earned him the respect of the bourbon industry and a place in the Kentucky Bourbon Hall of Fame. The one person outside the bourbon-making industry to receive the honor, Veach’s name appears alongside names like “Pappy” Van Winkle, Col. Albert Bacon Blanton, Bill Samuels of Maker’s Mark, and several members of the Beam family. “Mike really takes joy in making discoveries that add to the general history of the industry,” says Morris, who has known Veach for 16 years. “A lot of bourbon connoisseurs look up to him.”

Perhaps more impressive is that he has kept that support even when taking on some of the industry’s best-loved folklore, like how bourbon—which is essentially corn whiskey aged in charred oak barrels—originated. Popular legend credits Elijah Craig, a Baptist minister and distiller living in Kentucky in the 1790s, as the father of bourbon. The story goes that a fire at Craig’s distillery burned many of his barrel staves. Too frugal to throw them out, Craig used the staves anyway, turning the charred sections to the inside of his barrels so no one would see. He poured in his corn whiskey and shipped it down the river to New Orleans. By the time it arrived, the whiskey had developed a new sweet flavor, and bourbon was born.

It’s an intriguing tale, peppered with the drama of fire, the allure of whiskey and the quirky charm of a bourbon-making preacher. There’s just one thing wrong. “It’s probably not true,” Veach says with a good-natured smile. Even in a pressed shirt and tie, Veach has a rumpled academic air about him, with none of the stuffiness. Inherently shy, he speaks haltingly at first, but once he gets into telling a story, dates and facts flow quickly.

“There’s no doubt that [Craig] made whiskey,” he says. “As a matter of fact, I have seen court cases where he was being sued by the government for not paying his tax during the whiskey rebellion.” But the earliest reference to charred barrels Veach has found is in a letter from 1826, 30 years after the legendary fire.

Written by a Lexington, Ky., wholesaler to a distiller in Bourbon County (where bourbon was supposedly invented), the letter ends with: “It is suggested to me that if the barrels should be burned upon the inside, say only a 16th of an inch, that it will much improve [the whiskey].”

“This is someone in Lexington, telling a distiller in Bourbon County how to make bourbon,” Veach says. “If Craig created bourbon [in the 1790s] why did it take 30 years for somebody to start writing about charring barrels?”

So who did invent bourbon?

John and Louis Tarascon were French businessmen who set up a warehouse and mill on the falls of the Ohio River to conduct trade between Louisville and New Orleans. Veach’s theory is that the brothers bought whiskey and put it into charred barrels—as opposed to the uncharred barrels that whiskey was normally aged in. Why would they think to do that? Because cognac is aged in charred barrels and the Tarascons hailed from a part of France not too far from the Cognac region. And records at the time show that the people of New Orleans wanted cognac, not whiskey.

Veach suggests an experiment in support of this theory: “Pour yourself a glass of bourbon, a glass of scotch and a glass of cognac. Taste the three and see which ones taste the most alike. What you’re going to find is that the bourbon and the cognac taste more alike than bourbon and scotch.”

In addition to sifting through the documents of bourbon’s past, Veach does a fair amount of another kind of primary research: tasting bourbons old and new, often side-by-side. “It’s not just academia that he excels in,” Morris says. “On top of being a historian, he is a pretty keen judge of whiskey.”

Ask Veach what his favorite bourbon is and he’ll tell you, democratically, that it depends on what he’s doing, the time of year, or his mood. But he’s quick to offer examples. “On a cold winter’s night with a little bit of snow in the air, there’s nothing better than a Weller’s Centennial. It’s got a nice caramel-y apple type flavor that is just fantastic,” he says. “On a hot summer day, I like Old Forester Signature, 100-proof, mixed about half-and-half bourbon and water.”

Much like a wine connoisseur, Veach describes bourbons with a combination of flavor cues. And, of course, he likes to get his hands on the old stuff—the really old stuff. “I once had some I. W. Harper, distilled in 1936 and bottled in 1941, that was very good, with [notes of] citrus fruit and caramel with a touch of sweet spice,” he recounts. “I like fruity bourbons with rich caramel and vanilla flavors.”

Veach regularly offers a bourbon tasting for six at fund-raising auctions for nonprofit organizations, especially those with historical missions. “I’ll bring four or five good bourbons to your house or wherever you want to have it, and we’ll taste these bourbons and talk about them,” he explains. “After I’m through, you keep what’s left in the bottles for your bar.”

The tastings are usually made up of new bourbons, but one held in December included an 80-year-old bottle of Old Charter. It’s one of several bottles—all different, all from the Prohibition era—given to Veach by a member of the Filson who found them while cleaning out his family home.

To hear Veach tell it, his career as a bourbon historian is a happy accident—an unplumbed field of research he lucked into when, as a graduate student studying medieval history he accepted an internship with United Distillers. But he seems to have found a comfortable home among the Colonial families of the South and their native spirit. And the respect he’s earned from the industry flows both ways. “I’ve yet to meet anybody in the bourbon industry, either alive or dead, that I dislike,” he says. “I simply consider myself a lucky person to be able to what I do today.”