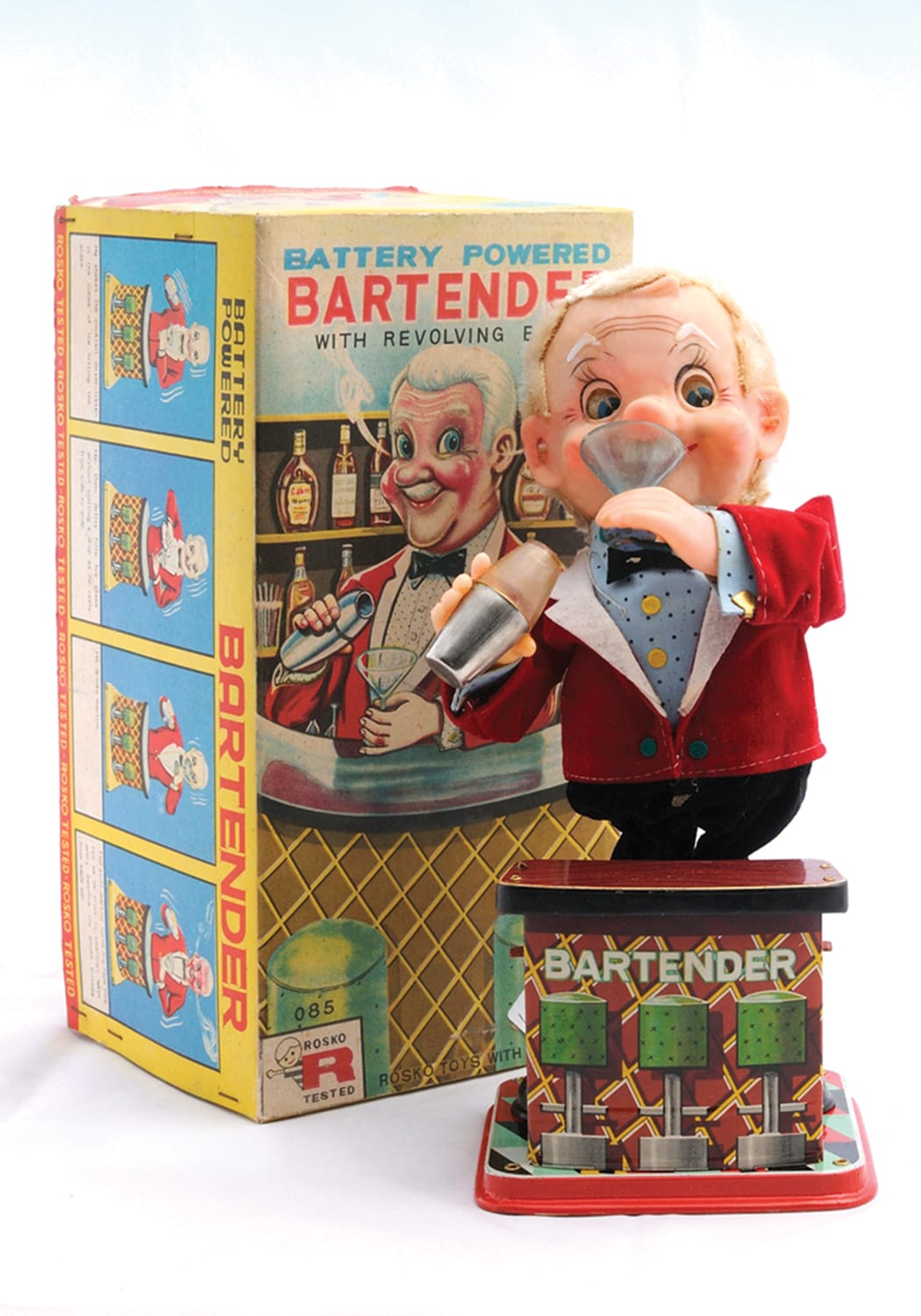 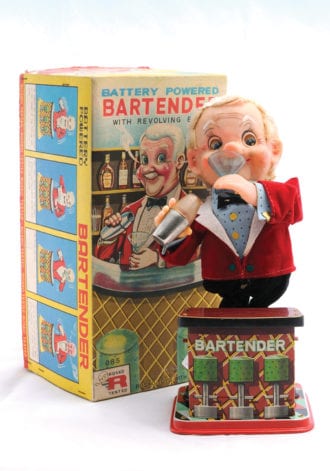 The one cocktail story that every newspaper, magazine and website is required to publish at least once every other year is “10 Essential Items Every Home Bartender Must Have.” You’ve read these. I’ve read these. But I’ve found not a single one can be trusted, because I have yet to see a list that insists that every home bar must have a Battery Powered Bartender.

To be fair, the Battery Powered Bartender hasn’t been made for about 50 years. But even the moderately enterprising can find them on eBay, often in working condition and still in their boxes.

The Battery Powered Bartender originally came in two models: Rosko and Charley Weaver. Rosko was the original. Rosko wasn’t actually his name, but people called him that because he was made by Rosko Manufacturing in Japan. The company also made other quirky automatons out of stamped tin and small gears in the 1950s and ’60s. These included Battery Powered McGregor (a tartan-wearing Scotsman who puffed a cigar); a Neapolitan balloon blower; a bear that drank coffee; Josie the Battery Operated Walking Cow; and one monkey that shot billiards and another that maniacally clapped cymbals.

Rosko the Bartender was just shy of a foot tall and had white hair and a bushy white mustache. He wore a black bow tie and a red dinner jacket with white lapels. When a switch was flipped, the grating sound of grinding gears would kick in, and Rosko would jerk his cocktail shaker up and down several times with his right hand before pouring it into the Martini glass in his left. He’d bring the glass up to his mouth, while at the same time his face would pulsate with a crimson glow (thanks to an ingeniously placed bulb), then his lips would smack mechanically and noisily. Finally—whoa!—smoke would come out his ears.

(The Charley Weaver version did much the same, although it was modeled after a befuddled-but-canny country bumpkin, a television role created in 1959 by the actor Cliff Arquette. Charley Weaver was famous mostly for one-liners on Hollywood Squares and never played a bartender as far as I know. As such, this stands as a landmark in the history of random celebrity licensing deals.)

I’ll admit that my fondness for Rosko the Bartender may stem in large part from my own childhood. My grandparents had a Rosko, which they kept on a shelf in their bar, built in an alcove off the kitchen. They had a well-polished mahogany bar and glass shelves behind it filled with cut-glass tumblers and Martini glasses. Guests always gravitated to the bar, avoiding the living room that smelled like mothballs and sadness. Here I would sit my 6-year-old self on a barstool amid the mayhem, where I’d be served a glass of ginger ale with a cherry. If I were patient, someone would eventually bring down Rosko for my entertainment.

Rosko was part of a goofy culture of cocktails that thrived in the middle of the last century. My grandparents also had a clock that read “No Drinking Until After 5” and on which every number was a “5.” This was the era of coasters and cocktail napkins featuring pink elephants with stars circling around their heads, which I interpreted to be the universal symbol of inebriation. At the homes of my parents’ friends, I saw two-foot-high street lamps topped by globes that read “BAR,” and below which were slouched and sodden figures in Charlie Chaplin-esque outfits, sometimes with X’s for eyes. At night, we’d watch The Andy Griffith Show, and my favorite moments were when Otis Campbell, Mayberry’s town drunk, appeared—in the words of uptight deputy Barney Fife—“smashed, buzzed, tiddly, gassed, off the wagon and back on the sauce, or just plain drunk.”

So why is having a Battery Powered Bartender essential to the home bar? Because it’s what separates home bartending from professional bartending. It’s a herky-jerky reminder that you don’t need shirt garters and cuff protectors and etched mixing glasses from Japan to do it properly.

But in an era when the bar scene has become more professional and serious about itself, home bartending has remained much as it has for a half-century, when my grandparents were mixing up Canadian Club highballs and hauling out the Battery Powered Bartender to remind everyone—including any kids who might be in the room—that social tippling at home is neither science nor art, but a form of social entertainment, a way that families and friends can connect.

So you can have your elaborate outdoor kitchens clad in slate and state-of-the-art home theaters. I’ll take a simple alcove bar equipped with a toy bartender who has smoke coming out of his ears any day.