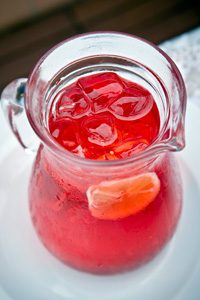 It’s a key ingredient to any good party—the cocktail. But what’s the best way to streamline serving drinks to a thirsty crowd? For those of us who want to spend more time mingling and less time mixing, batching out cocktails ahead of time is a good option. Here are a few pro tips to help you do it right.

Know your proportions. You don’t have to be a math major to mix up recipes large enough to serve a crowd. But instead of busting out the calculator, break the drink down by proportions. “It’s the easiest, most effective way to ensure your bigger-batch cocktails taste the way they were intended,” says Chicago-based cocktail consultant Todd Appel.  Think about it: how quickly can you multiply 3/4 ounces by 12 and then convert that into cups? Not so easy, right? Instead, think about ingredients in terms of their proportions in the finished drink—for example, a cocktail comprised of 1 1/2 oz., 3/4 oz, 3/4 oz. breaks down into a ratio of 2-1-1. Once you figure that out you can easily apply the same proportions to ounces, cups, gallons, etc., making even on-the-fly mixing a cinch. “Even if you only have a juice glass on hand,” adds Appel, “if you know the proportions you can mix the drink without exact quantities.” Talmadge Lowe, the Los Angeles-based cocktail caterer behind Pharmacie, also puts the proportions principle to practice and lets guests customize their own cocktail once he has the base of the drink built. His suggestion? Batch out a pitcher of Whiskey Sours with 1 part each of whiskey, fresh lemon juice and simple syrup, then put out several different flavors of bitters for guests to dash into their own drinks.

Consider punch. “By design, punches are meant to be batched,” says co-founder of San Francisco-based Bon Vivants cocktail company, Josh Harris. “The proportions are measured out for you,” he says, “and they eliminate the added step of someone having to shake and strain each drink.” Simply build the punch in a large punch bowl, add a large ice block, and let guests serve themselves. Both this Barbadian Gin Punch and this Groom’s Fish House Punch are designed with crowds in mind. “With punch,” says Harris, “you can just set it and forget it.”

The dilution debate. Depending on who you ask, you’ll get a different response on whether or not to add water to a pre-batched cocktail to account for the dilution of ice that comes from shaking or stirring a single drink. Some bartenders argue that dilution simplifies batching cocktails like Manhattans and Negronis and eliminates the need for each to be individually stirred with ice—just combine ingredients, add water, chill and serve. If you do go this route, you can determine the amount of water to add by weighing a single serving of the cocktail you’re planning to pre-batch before and after you’ve stirred with ice—the difference in weight is the amount of water that makes it into the finished drink. From there you can multiply by servings you’re planning to batch and add accordingly. In the opposite corner, other bartenders will argue that not only can adding water quickly lead to mathematical error (making for a messy, and expensive mistake), but the cocktail won’t be as cold as it would be if stirred with ice.

Avoid eggs. Unless you’re mixing up a big batch of egg nog, reserve eggs for single-serving drinks. They require an armload of shaking to incorporate into a batch of drinks and might separate from the rest of the ingredients.

Use flavored syrups and teas. Want a quick and easy way to infuse layers of flavor into your pre-batched drinks? The answer for Harris is simple—simple syrups. “You’re probably already making a simple syrup,” says Harris, “so why not throw in some fresh mint or some other herb for added flavor?” Teas are another great way to amp up the nuance. “We add tea in all our big-batch recipes,” says Harris, “they offer both dilution and flavor.” Not to mention the end results will impress your guests. “Think about it,” Harris says, “you start with a Gimlet as your base and can quickly turn that into a combination of gin, citrus, mint syrup and maybe a chamomile tea.”

Save sparklers for last. Want to serve a festive fizzer? Just because you’re mixing things up ahead of time doesn’t mean you have to nix the bubbly. “Anything with bubbles—like sparkling wine, club soda and tonic —will go flat,” says Talmadge, “so add those in right before serving.” But if chilled ahead of time and poured at the very last second, bubblers can add a spritzy finish to big-batch drinks.