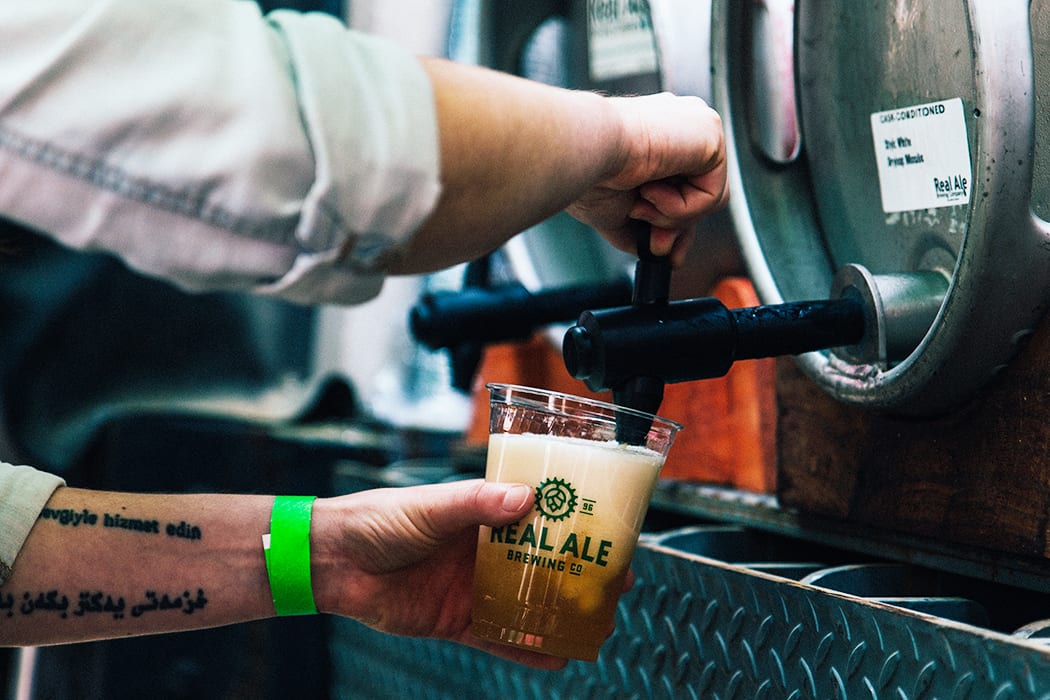 Explosive growth continues to make news in the beer world. The number of small and independent breweries is at about 4,800 this year, and well-established players like Sierra Nevada, New Belgium and Lagunitas have opened secondary production facilities on opposite ends of the country in order to keep up with demand. And as the industry grows, it’s easy to assume that one of the main goals for craft brewers is gaining national distribution.

But not everyone is aiming for national beer dominance. In fact, many breweries are focusing more on their own cities and states. In Blanco, Texas, a small town about 50 miles North of San Antonio, Real Ale Brewing started making popular beers like Rio Blanco Pale Ale and Brewhouse Brown back in 1996. For the Texas-bred brewing crew, the decision to only ship beer in the Lone Star State has a lot to do with pride, which their marketing speaks to: “We’re Texans. We care about Texans. So, we want to make sure the people we care about have the highest quality beer possible.”

For owner Brad Farbstein, it’s also about quality control. Since the brewery makes unfiltered and unpasteurized beers, they’d have to change production methods to get it across state lines with quality intact, which would in turn change the flavor profiles— something they’re not willing to compromise on just to sell more beer. The brewery’s environmental footprint is also a concern. “There was a statistic from a craft brewers conference from a few years back that said to ship a 12 ounce bottle from the West coast to the East coast requires four ounces of diesel for every bottle,” he says. “When we think about how our business effects the planet and how we consume scarce natural resources, we don’t want to contribute to that type of activity.”

For other breweries, the benefits of local-only distribution were realized after trying to dabble outside of home markets. Breweries like New Glarus in Wisconsin, where beer has bubbled since 1993, have long been one of the country’s most vocal proponents of the “drink local” philosophy since the brewery scaled back distribution from Illinois in the mid-nineties. Wholesalers, customers and distributers were up in arms when it happened (the beer is beloved throughout the Midwest), but president Deb Carey has never doubted it was the right decision. For her, it was largely logistical. “The issue is that it’s expensive. If you have sales people all over the planet, you have to pay their expenses and it’s hard to connected with your customers when you’re spread so thin,” she says. “At the end of the day, we could barely get in and out to all the retailers in Illinois. I’d wake up at 3 a.m. and travel to Chicago where I’d sell all day and get home around midnight.”

The Brewers Association craft beer program director Julia Herz (one of our 2016 People to Watch) backs up the idea that for many breweries, far-reaching distribution plans often aren’t an option due to the high cost of doing business. She also points to a shrinking distribution industry. “When you’re talking about selling beer, you can’t just walk up to Safeway and ask them to put your beer on the shelf. To go to out of state, you have to depend on the middle tier—the distributor,” she says. “And that world has become more consolidated over time. There are 1,000 or so active distributors nowadays compared to several thousand when this craft movement was coming of age, so as you have more breweries coming online, there’s less of a chance the little guy and gal brewery is ever going to see the light of day on that liquor store shelf.”

Trying to compete in a crowded local market can be hard enough, so breweries like 20-year-old Steamworks Brewing in Durango, Colorado, followed a similar path as New Glarus. At one point in the mid aughts the brewery distributed beer to nine states. In addition to similar concerns about expenses and shelf space, freshness was another reason to pull back and focus on Colorado. “We had instances in other states where we’ve found two-year-old product on the shelf,” says CEO and co-founder Kris Oyler. “That’s not our best foot forward and that’s not going to help us sell beer and have people enjoy the beer in the way that it was brewed to be enjoyed.”

And it’s not just the old guard taking this approach. The issue of quality control and freshness also concerns Connor Casey, founder of three-year-old Cellarmaker Brewing in San Francisco. “We don’t think our hoppy beer tastes great at 2 or 4 months old, so we deliver about 90% of our hoppy beer within 72 hours of being released in the tap room,” he says. “In the final panel of the California Craft Brewers Association Beer Summit this year, industry veterans shared their belief that the future of hoppy beer will be local neighborhood breweries. Serving beer fresh off the brite tank, when it hasn’t been shipped around and is in its freshest possible condition is something we’re passionate about. ”

Herz agrees, citing that while large global brewers record less than 1% of sales happening on-site, 7% of the beer sold by small and independent craft brewers happens right at brewery taprooms and brewpubs. “That number growing is significant,” she says. “I think it’s going to continue to grow, as more breweries, whether they’re distributing out of state or not, continue to reinvest in their backyards.”